The Bank of Greece has issued a new gold coin which focuses on the extraordinary archaeological sites of Tiryns and Mycenae. Today, the Archaeological Sites are imposing ruins of the two greatest cities of the Mycenaean civilization which dominated the eastern Mediterranean world from the 15th to the 12th centuries BC and which played a vital role in the development of the culture of classical Greece. These two cities are indissolubly linked to the Homeric epics, the Iliad and the Odyssey, which have influenced European art and literature for more than three millennia.

Tiryns (known as Τίρυνς in ancient Greek) is a Mycenaean archaeological site in the administrative regional unit of Argolis, situated in the Peloponnese, just north of the city of Nauplion – former capital of the Greek Republic from 1821 to 1834. The Acropolis of Mycenae as well as the monuments in its vicinity have maintained their authentic features to the present days.

Tiryns, at one time was a hill fort with urban occupation reaching back seven thousand years, from before the beginning of the Bronze Age. The settlement and city reached its height between 1400 and 1200 BC, when it was recognized as one of the most important centers of the Mycenaean world, in particular in Argolis. Its most notable features were its imposing palace, its cyclopean tunnels and especially its walls, which gave the city its Homeric epithet of “mighty walled Tiryns“. In ancient times, the city was linked to the myths surrounding Heracles, with some sources citing it as his birthplace. The architecture and design Mycenae and Tiryns, such as the Lion Gate and the Treasury of Atreus and the walls of Tiryns, have been consistently described as some of the most outstanding examples of human creative genius. The Mycenaean civilization, as exemplified by Mycenae and Tiryns, had a profound effect on the development of classical Greek architecture and urban design, and consequently also on contemporary cultural forms throughout the centuries. Mycenae and Tiryns represent the pinnacle of the Mycenaean civilization, which laid the foundations for the evolution of later European cultures.

Since November 1997 a Program of restoration and conservation has been initiated on the site. Listed a UNESCO World Heritage Site together with Mycenae in 1999, the site has continued to fascinate visitors and would-be explorers from its first initial excavations in 1831 to the present day. 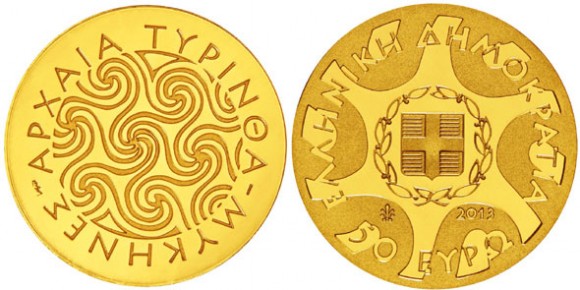 The coin, designed by resident artist George Stamatopoulos – designer of the 2014 COTY award winner for the most historical coin, includes elements of the Mycenaean decorative motifs on the obverse which resemble stylized waves in a connected circular format. The text “ΑΡΧΑΙΑ ΤΥΡΙΝΘΑ ΜΥΚΗΝΕΣ” (ancient tyrintha mycenae) surrounds the primary design. The reverse depicts a stylised six-spiked star motif which is recessed on the coins surface. In the middle of the star is the crest of the Hellenic (Greek) Republic along with the text “ΕΛΛΙΝΙΚΗ ΔΗΜΟΚΡΑΤΙΑ” (Hellenic Republic) along with the coin’s denomination of “50 ΕΥΡΩ” and the year of issue, 2013, the distinctive mintmark of the Greek State Mint is placed just to the left of the year.