The Bank of Greece have issued (12th December) a new collector coin which is minted in remembrance of the 175th birthday of one of the country’s most important and celebrated artists, Nikolaos Gyzis, (1842-1901). Gyzis is considered one of the finest modern Greek painters and whose influence in the discipline has been far-reaching outside the borders of the Greek state. Born on the island of Tinos (but having grown up in Athens), Gyzis attended classes at the Athens School of Fine Arts. In 1865, he received a scholarship to study at the renowned Munich Academy of Fine Arts, where he mastered a flawless technique and the tenets of academic realism. Thereafter, he spent most of his life in Munich, where he became a full professor at the academy, returning to Greece only occasionally. His journey to Asia Minor with fellow artist Nikephoros Lytras enriched his palette and shifted his focus to Greek genre themes. The output of his later years became more poetic and idealistic, often inspired by Greek mythology and religious themes, with a discernible influence of symbolism.

The coin, which is produced by the National Mint at their facilities in Athens on behalf of the Bank of Greece, is designed by George Stamatopoulos. The obverse side includes a depiction of the artist facing to the right, which is based on an earlier sketch. The text ΝΙΚΟΛΑΟΥ ΓΥΖΗΣ 1842-1901 is placed in a semi-circle above and towards the left side.

The reverse shows the artist’s palette and paintbrush together with the Greek crest. A facsimile of the signature of Nikolaos Gyzis and the denomination of 5 ΕΥΡΏ are also visible.

The base metal coin is enclosed in a colourfully printed blister-pak folder which includes some of Gyzis’ more well-known works of art and includes a slipcase. For additional information about this and other coins issued by the Bank of Greece, please visit their website to download an order form. To see the skill employed in the production of this exceptional coin, you may view the Bank of Greece’s promotional video.

Portrait of a Master Painter: The Brilliance of Nikolaos Gyzis, 1842-1901

Nikolaos Gyzis is arguably one of the most important Greek painters of 19th century. He is considered to be one of the most important representatives of the academic realism of the late 19th century as well as the conservative cultural movement known as the “Munich School.” He participated and won numerous prizes in many Greek and European exhibitions from 1870 to 1900.

He was born in the in the village of Sklavochori, on island of Tinos, an island known for its artistic wealth. Gyzis was one of six children whose father, Onoufrios, was a carpenter, and his mother Margarita, a housewife. In 1850, his family decided to move to Athens and that is when the young Nikolaos decided to study at the Athens School of Fine Arts, first as an auditor, and then as a full-time student from 1854 until 1864. In the final years of his studies, he would meet Nikolaos Nazos, a wealthy lover of art who would play a great role in Gyzis’ scholarship at the Academy of Fine Arts in Munich, Germany.

Gyzis made the move to Munich in June 1865, where he met his friend and colleague, Nikiforos Lytras (1832-1904) — a fellow Greek born on the same island of Tinos as Gyzis — helped him adjust quickly to the German way of life and atmosphere of the time. Lytras would also become a painter of noteworthy repute in addition to becoming a professor at the Munich School of Arts in 1866 — a position he would hold for the rest of his life.

By June 1868, he was accepted to study at the Karl von Piloty Laboratory. Upon completing his studies in Munich in 1871, by April 1872, Gyzis returned to Athens, in order to transform his family home on Themistokleous street into an atelier (studio), suitable for use by an artist. Along with Nikiforos Lytras, he traveled in 1873 to Asia Minor to visit with parts of the Ottoman Empire still populated with ethnic Greeks in an effort to see their way of life. These visits proved to be of great value to Gyzis, as much of what he saw was captured in many of his works of art.

While studying at the Academy of Munich, Gyzis embraced the teachings of his German mentors which resulted in his creating artwork of rare skill and insight, balancing between historical realism and the ethological (or natural environment) of art. It had been said at the time that his artwork was more “German” than the work of actual German artists, and for this, he was praised by the art critics of his day.

Some of his works, such as “Ta arravoniasmata” (“The engagement”) in 1875 and “Kryfo Skolio” (“Secret School”) in 1885 are based upon mythical legends of the era of the Ottoman Empire. Although the historical facts are still disputed, nevertheless, their artistic value remains undeniable.

On his return to Greece, Gyzis became despondent over the conditions in his homeland and would make the decision to leave Athens in May 1874, and return to Munich where he would spend the rest of his life. In 1876, he travelled to Paris along with his friend Nikiforos Lytras in 1876 to see for himself another aspect of the art world, including exhibitions and the highlighting of artists. In 1877, Gyzis met and married Artemis Nazou. Together, they became parents to four daughters and a son who was named Onoufrios-Telemachos.

In his later career, Gyzis turned to metaphorical and metaphysical shapes due to his highly religious nature. Considered as one of his most important pieces was “Idou o Nymfios erhetai” (“Behold, the Bridegroom Cometh in the Midst of the Night”) represents the vision of the mature Gyzis and bluntly reveals his distress about existence. The theme that dominated his last works was the fight against evil and the final victory of good. The most important figure in his paintings is the depiction of women, who are often represented as the art feature itself, sometimes as music, spring, glory, and so on. Gyzis’ work also included posters and book illustrations.

By 1880, Gyzis was named an honorary member of the Academy of Fine Arts in Munich, and in 1888, he was elected a professor in that same institution. Back in his homeland, his mother died in 1881, and a year later his father would also die. Professionally, he was at the height of his notoriety when he was presented with gold medals for excellence in both the International Exhibition of Munich and Madrid in 1892. Gyzis was also elected a member of the committee of the International Exhibition of Chicago in 1893. That same year, he contributed the illustrations for Dimitrios Vikelas’ novel, Filippos Marthas. In 1898, Gyzis would visit Greece (unknowingly for the last time) as he was feeling homesick and because he never forgot the country where was born and had spent the most formative years of his life. Gyzis died in Munich in January 1901, from the effects of leukemia and was buried in the North Cemetery, Munich. He was once quoted as having said about his chosen profession:

How truly poor is a painter, compared to a poet! If I were to be reborn, I would prefer to return as a poet or a musician.

In his memory, that same year, there was an exhibition during the 8th International Art Exhibition at the Glaspalast — the glass and iron exhibition building located in the old botanical garden in Munich — which featured many of his finest works. 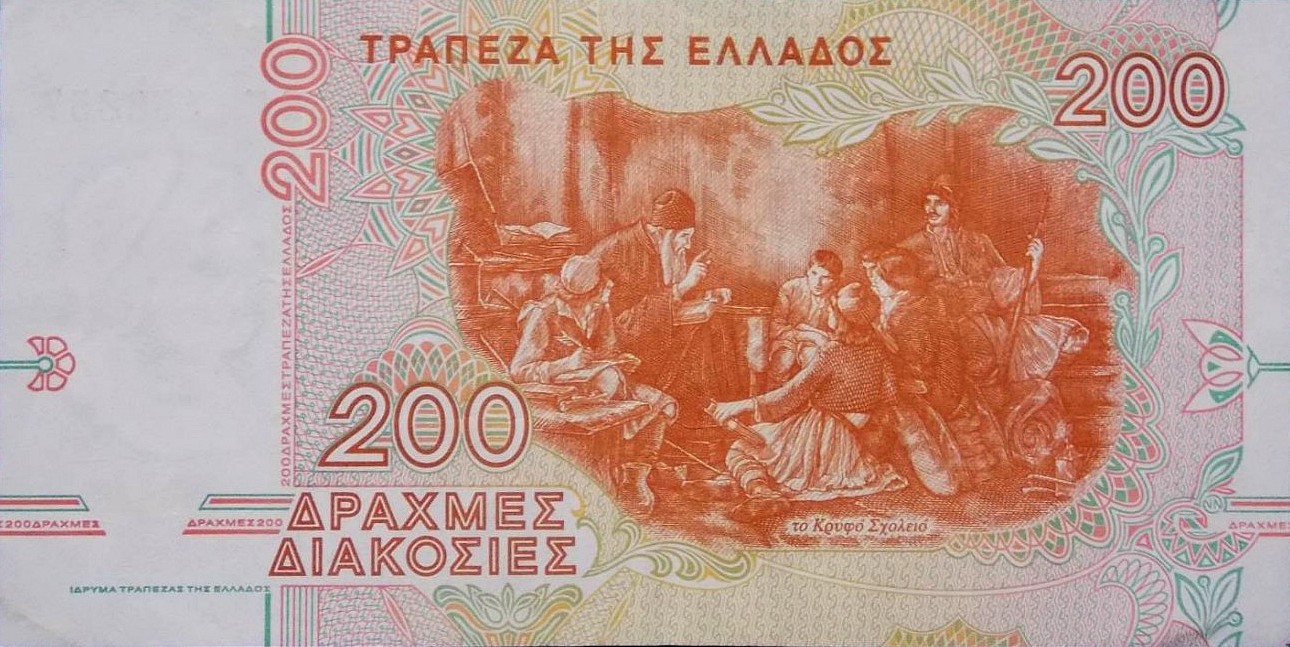 More recently, Gysis’ painting “The Secret School” was depicted on the reverse of the Greek 200-drachmas bank note from 1996-2001.