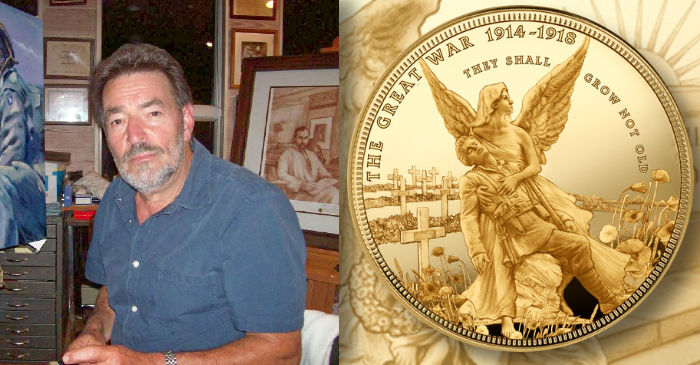 On or before Veterans’ Day, November 11, 2018, the Bradford Exchange will launch a series of coins designed by renowned American artist and designer Joel Iskowitz that pays tribute to the fallen soldiers of the First World War (1914-1918).

Mr. Iskowitz retired from the U.S. Mint earlier this year as the most prolific coin and medal designer of the Mint’s Artistic Infusion Program that is intended to add greater diversity to the designs that appear on U.S. coins and medals. 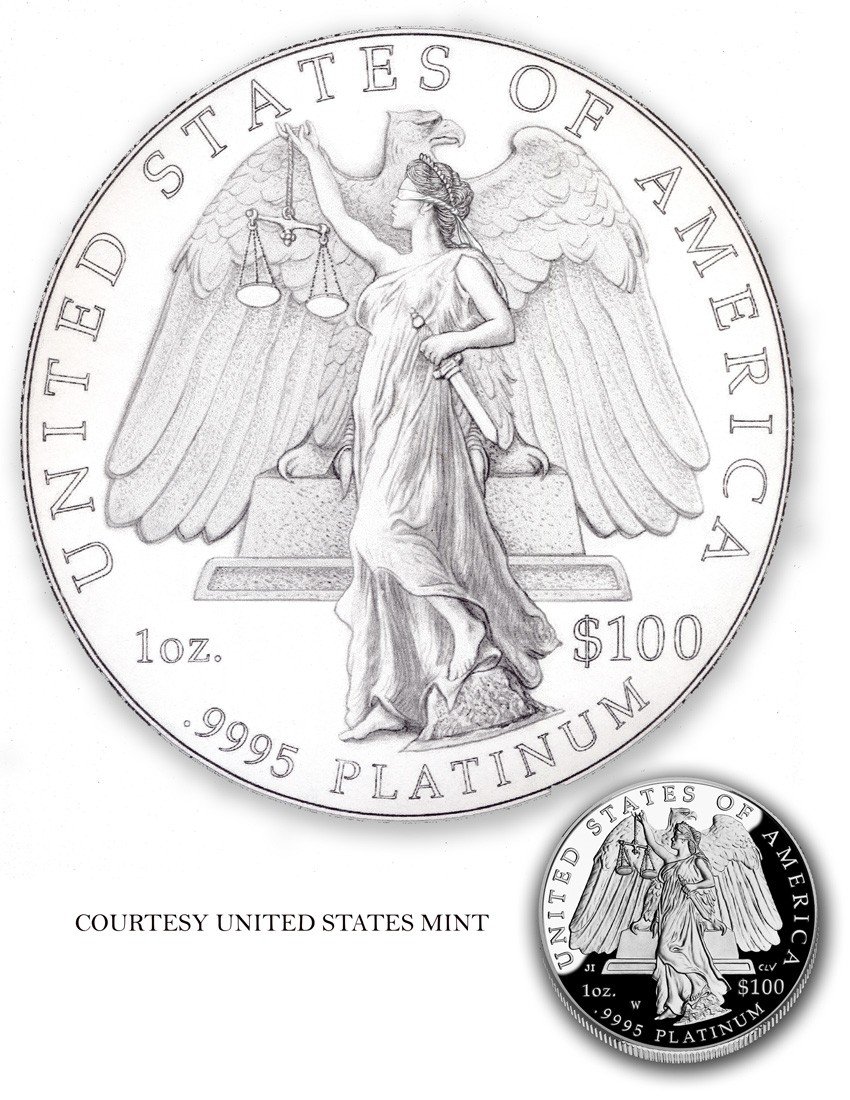 He designed 54 important works of numismatic art for the Mint between 2005 and 2017, which includes some of the most well-regarded designs of recent decades such as several for the American Platinum Eagle Proof coin series and the 2016 Theodore Roosevelt National Park coin in the America the Beautiful series.

Mr. Iskowitz has a distinct artistic style and refers to himself as a “narrative artist,” which means his art is designed to use images to tell a story. Early in his career, he worked as an illustrator for books and other materials.

He also noted in an interview I did with him earlier this year that he was influenced by the great art of ancient Greece and Rome and by the renowned artists of the Renaissance and Baroque periods.

These elements of his artistic approach are on full display in the impressive series of coins he designed for the UK-based Bradford Exchange Limited, a web-based company that sells commemorative plates and other items for collectors that was founded in 1973.

The series, which will be struck in gold — and possibly in silver — is being issued with the cooperation and endorsement of the Lest We Forget Association, a voluntary organization created in 1922 to provide support and other services for disabled servicemen and women.

Mr. Iskowitz, whose earlier work included participating in the Air Force art program and whose work has been displayed at the Pentagon, among many other notable locations, was asked by the Bradford Exchange to create a series of six designs to mark the centennial of the Armistice, which was at the end of the Great War in 1918.

18 million people died during the so-called “War to End All Wars,” and 20 million were wounded and returned home.

After the war, it was decided that each of the allies should each issue their own bronze victory medal with a similar design, and they served as an important inspiration for this new series, which will be issued in the name of a UK Commonwealth nation and thus carry an effigy of Queen Elizabeth of the obverse of each piece. They are expected to have a denomination of one crown, which is equal to five shillings.

In addition to the stunning artwork of the designs that evoke a neo-classic style, this new series, which Mr. Iskowitz said has a “romantic look” to it, takes a different approach to what victory means from the many other coins and medals that have been produced on the same topic.

In these pieces, victory appears as an angel whose mission is to help remember and protect the fallen soldiers, rather than a military victory in the traditional sense.

According to the artist:

The underlying theme is “Remembrance,” featuring a vision of a compassionate, and at times, a mournful Victory, underscoring the enormous costs of the Great War. Each coin reflects the bittersweet nature of the victory, a tribute to those fallen and to the bravery and the sacrifice of the British soldiers.

The artist also drew inspiration for these pieces from the famous poem, “In Flanders Field,” written in 1915 by Canadian physician Lieutenant-Colonel John McCrae. He wrote the poem during the Second Battle of Ypres, the day after he helped to bury a close friend. He had noticed how poppies bloomed around the grave and included this observation in his poem, which was written from the viewpoint of the dead soldiers. It is the defining poem of the First World War, and the poppy became an enduring symbol of remembrance.

The remembrance poppy was inspired by the World War I poem “In Flanders Fields.” Its opening lines refer to the many poppies that were the first flowers to grow in the churned-up earth of soldiers’ graves in Flanders, a region of Europe that overlies a part of Belgium.

These are the six coins with the inscriptions that appear on them. They attempt to evoke the spirit of remembrance, which each inscription inspires: 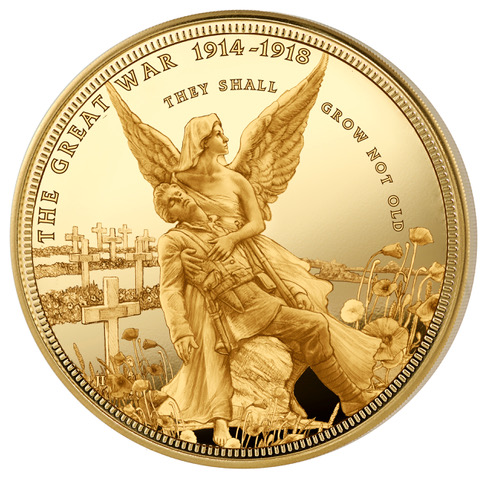 1) Victory in Flanders Fields carrying a soldier in her arms. Inscription: THE GREAT WAR 1914-1918 and THEY SHALL GROW NOT OLD. 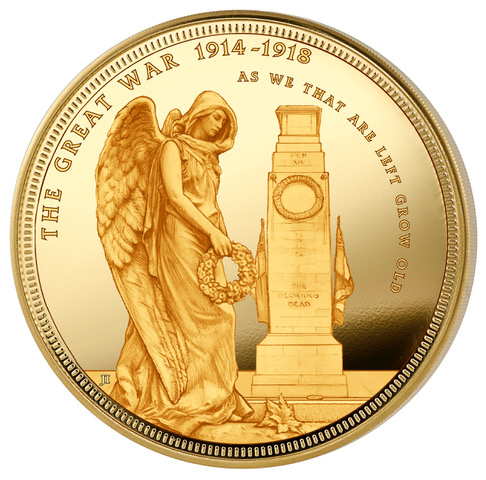 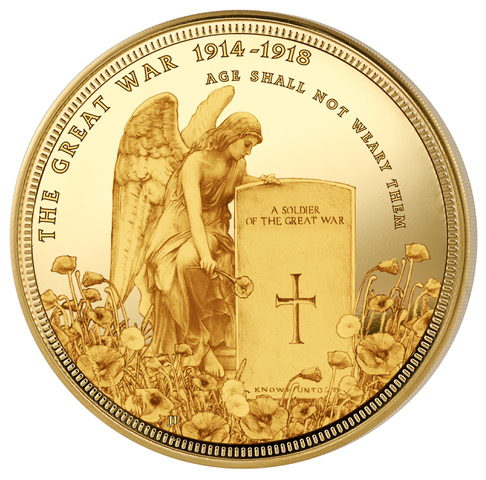 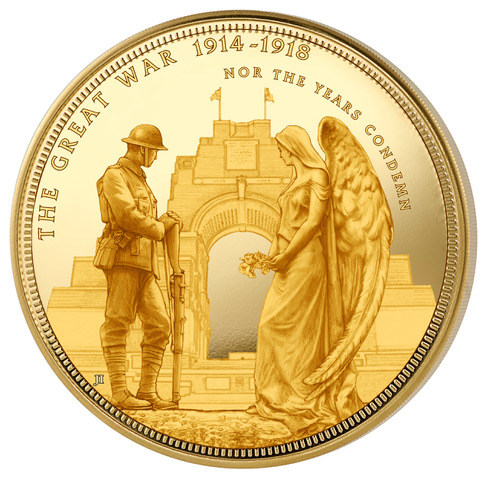 4)  Victory at Thiepval, France — Memorial to the Missing. Inscription: THE GREAT WAR 1914-1918 and NOR THE YEARS CONDEMN. 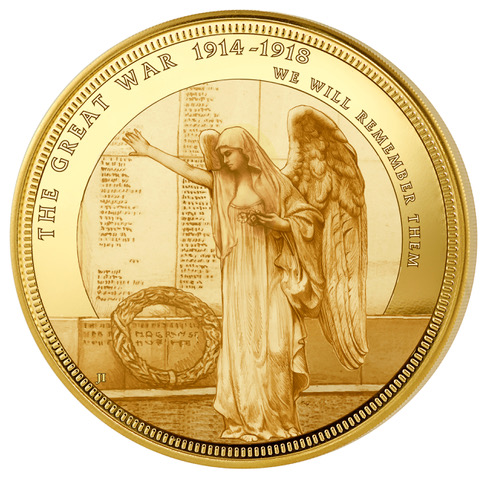 5)  Victory and the Stone of Remembrance. Inscription: THE GREAT WAR 1914-1918 and WE WILL REMEMBER THEM. 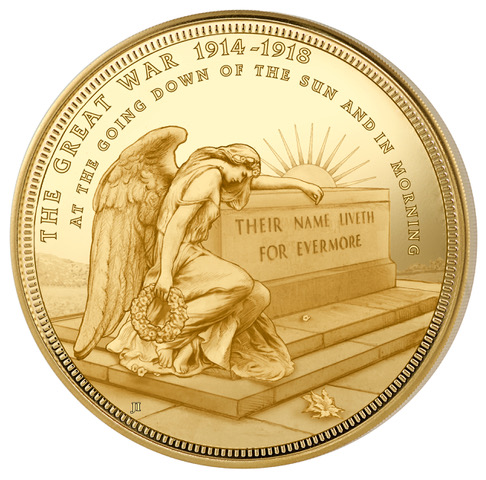 6) Victory and the British Arboretum. Inscription: THE GREAT WAR 1914-1918 and AT THE GOING DOWN OF THE SUN AND IN MORNING.

The poem “In Flanders Fields”:

In Flanders’ fields the poppies blow Between the crosses, row on row,

That mark our place: and in the sky

The larks, still bravely singing, fly Scarce heard amid the guns below.

We are the dead. Short days ago

We lived, felt dawn, saw sunset glow, Loved and were loved, and now we lie In Flanders’ fields.

Take up our quarrel with the foe;

To you from failing hands we throw the torch; be yours to hold it high,

If ye break faith with us who die

We shall not sleep, though poppies grow In Flanders’ Fields.

Louis Golino is an award-winning numismatic journalist and writer specializing in modern U.S. and world coins. His work has appeared in Coin World, CoinWeek, The Numismatist, Numismatic News, and COINage, among other publications. His first coin-writing position was with Coin Update. In 2015, his CoinWeek.com column, “The Coin Analyst,” received an award from the Numismatic Literary Guild for best website column. By 2017, he received an NLG award for best article in a non-numismatic publication with his “Liberty Centennial Designs,” which was published in Elemetal Direct.