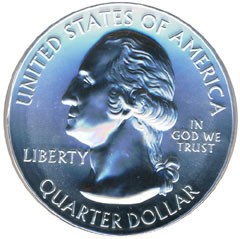 The United States Mint has notified authorized purchasers that the 2014 Great Smoky Mountains National Park 5 Ounce Silver Bullion Coins are temporarily sold out. The Mint is producing additional inventory and expects to have the coins available to order in a few weeks.

The America the Beautiful 5 Ounce Silver Bullion Coin series features the designs of the America the Beautiful Quarters Program struck in 5 troy ounces of .999 silver. The coins have a diameter of 3 inches and include incused edge lettering indicating the precious metal weight and fineness. The bullion coins are distributed through the US Mint’s network of authorized purchasers, who are able to purchase the coins in bulk quantities based on the market price of silver plus a fixed mark up.

The bullion coins carrying the design representing Great Smoky Mountains National Park originally went on sale March 17, 2014. By the end of the month, sales had reached 12,200 coins. The latest available information on the US Mint’s website indicates that sales have reached 22,400 coins as of April 15, 2014.

In addition to the bullion versions which are distributed through authorized purchasers, the US Mint also offers numismatic versions of these coins which are sold directly to the public. The numismatic version of the Great Smoky Mountains 5 Ounce Silver Coin went on sale April 7, 2014. The most recent available sales figures indicate that orders have been received for 21,415 coins from the 25,000 maximum mintage as of April 13.