The United States Mint has released numismatic bags and rolls containing the 2013 Great Basin National Park Quarters. A range of products is available which includes circulating quality coins with either the “P”, “D” or “S” mint mark, representing the Philadelphia, Denver, and San Francisco Mints, respectively. The circulating quality quarters bearing the “S” mint mark are not released for general circulation. 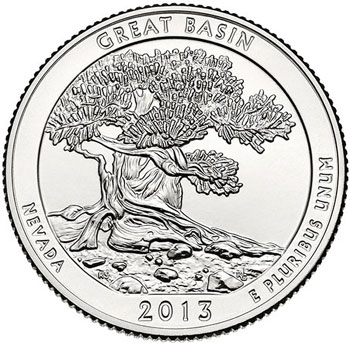 The Great Basin Quarter represents the third release of the year and the eighteenth release overall for the America the Beautiful Quarters Program, which will highlight a National Park or site from each of the 50 states, 5 U.S. territories, and the District of Columbia. The series began in 2010 and is scheduled to continued until at least 2021.

The reverse design of the latest release features a depiction of the beauty and unique qualities of a single Bristlecone Pine tree and the rocky glacial moraines where the trees grow. This image was selected to represent Great Basin National Park located in the state of Nevada. The obverse design of the coin features a portrait of George Washington.

Each of the products features special numismatic packaging which incorporates the name of the site, the state abbreviation, the face value of the contents, and the mint mark.

There are no stated mintage limits or household ordering limits. The Mint indicates that the products will remain available for sale for one year from the initial sales date or until inventory has been depleted. Orders may be placed online at http://catalog.usmint.gov.