One of the oddities in the silver commemorative series can be found in the issue released in 1922 to commemorate the centennial of the birth of President Ulysses S. Grant. The silver half dollar was produced with the exact same design as a gold dollar (the only time this has happened in the classic commemorative series), and two varieties are known of each denomination. While the creation of different varieties was not unusual, as we have already discovered in some of the earlier articles, it was peculiar since it was not planned as such. The two different varieties appear to have been created at the Mint for unknown reasons, although it was welcomed by the commission responsible for creating this issue, as it would serve to increase sales and profits. 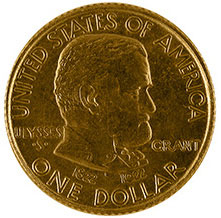 Initially it appears that only a gold dollar was planned, but the legislation that was passed by Congress called for both 10,000 gold dollars and 250,000 silver half dollars. As was usually the case with these early commemoratives, the half dollar number was quite ambitious and the mintage was nowhere close to this number, despite the release of the two varieties. The mintage of the gold dollar actually reached the total authorized mintage that had been approved by Congress, a feat not often repeated and worthy of being mentioned. Once legislation was passed it was Laura Gardin Fraser who was appointed to make the designs for this commemorative issue.

Fraser, who had been responsible for other coinage designs, decided to focus on Grant’s military career on the obverse and his birthplace in Point Pleasant, Ohio on the reverse. Grant spent little over a year at this log cabin before moving elsewhere in Ohio, but it would forever be known as “Grant’s cabin”. The cabin stands to this day in Point Pleasant, a small community in the extreme south of Ohio, although it was moved across the country on a tour in the 1930s before being moved to Columbus, Ohio, where it was displayed at the State’s Fairgrounds for some time. It later returned to Point Pleasant and was restored and opened as a museum.

The obverse of the coin features a bust of Grant facing right, in military outfit, with the face having a pretty much lifelike appearance. Grant’s name appears on the sides, while directly under the bust are the dates 1822 and 1922. The reverse is crowded yet appears very realistic, with the log cabin in Ohio amidst large trees filling up virtually the complete coin. The only lettering we see is IN GOD WE TRUST on the top and in small letters the motto E PLURIBUS UNUM. 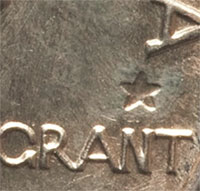 When the first 5,000 half dollars were received by the commission in early 1922, they were surprised to see a small incuse star added at the lower right of the obverse, right above the name “GRANT”. This was not part of the original models as employed by Fraser, and was a design element not requested by the commission for the half dollar. It resulted in perhaps one of the mysteries of the commemorative series, as nobody seems to know why the Mint added this little star to the half dollar design. Most likely it happened because of a miscommunication, as the star was to be added to the first half of the gold dollar issue, before it was to be removed from the dies when the rest of the gold dollars were struck. No matter how the variety was created it was welcomed by the commission, as collectors would now have to buy two half dollars to keep their collections complete.

Like some other commemorative half dollars, no accurate records were kept as to the mintage of the Grant commemorative half dollar. The situation was further complicated by the unexpected “with star” issue, which was first offered for sale in April 1922, and remained for sale at a cost over face value until the last day of the same year. The Mint records show two numbers for both varieties combined, an unknown number of pieces were unsold and later melted, which results in the whole equation being quite complicated. Most numismatic references now show a mintage of approximately 5,000 “with star” and 95,000 “no star” Grant half dollars, although it appears that approximately 20-30% of these numbers were later melted and need to be deducted from the total number of coins issued.

Regardless of the actual mintages of either variety, the “with star” issue is distinctively rarer, being one of the more difficult issues required in a complete 144 piece early commemorative silver set. Most certified coins fall in the MS-60 to MS-64 range, with gems being rare. It appears that most of these early pieces were purchased by the general public, not necessarily by collectors, resulting in many pieces showings signs of (mis)handling. Luckily enough for collectors working on a 50 piece “type” set the no star issue is much more available, even in certified gem condition, and most pieces are quite appealing.