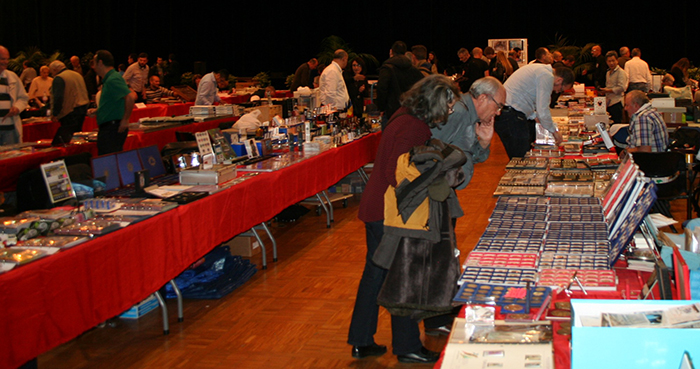 On the bourse. (All photos by the author)

This year’s Grand Bourse–XXIV Numismatique & Cartophile proved to be yet another successful coin event for dealers and collectors alike. Held in the Fontvielle locality of Monte Carlo, the show, which took place on December 4, was noticeably busier than last year, with an increased number of dealers as well as many more spectators and collectors. The show, now in its 24th year and sponsored by the Numismatic Association of Monaco, is organized courtesy of the Editions Gadoury, publishers of the popular catalogs of French and world coins as well as organizers of the weekend’s well-attended Gadoury Auction on the day before. For many dealers and collectors, this event-packed weekend—including the well-attended Saturday auction and the Sunday show—not only makes for an enjoyable time in one of the world’s most exciting and celebrated cities, but has become an important date on the numismatic calendar and a “must go to” for their annual show circuit. 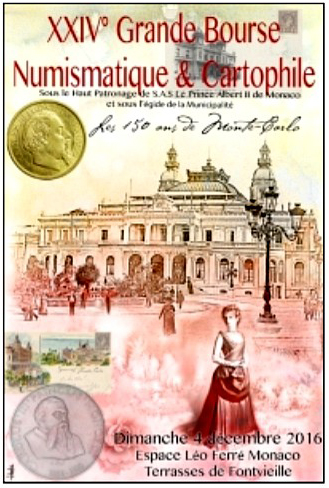 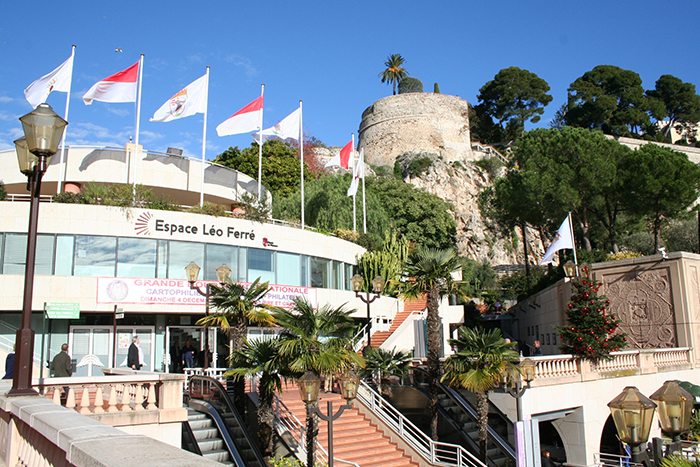 The Espace Leo Ferre in Fontvielle is centrally located and easily accessible. 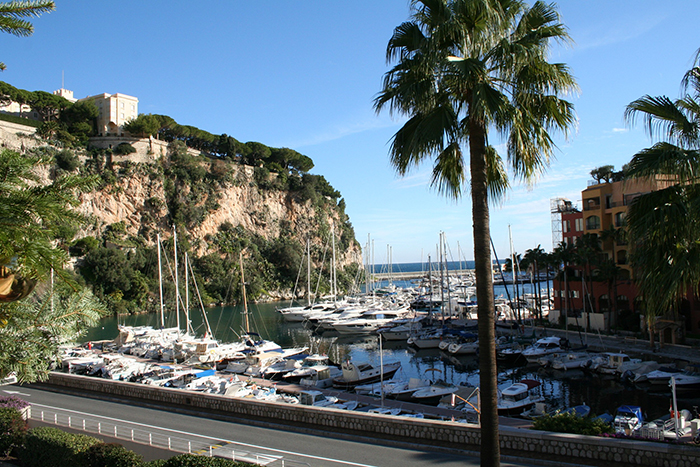 The view from the bourse. Part of the Palace Princier’s fortress is seen at upper left. 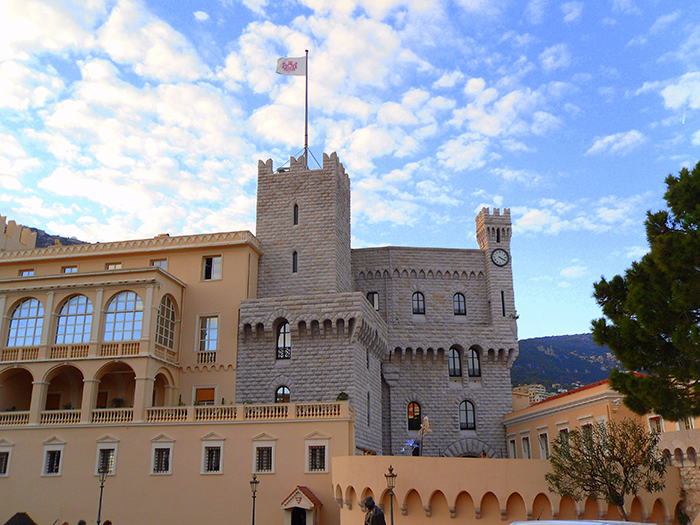 Palace Princier, in the heart of the old town of Monte Carlo.

The show is held each year at the Espace Léo Ferré, which is conveniently located in the Fontvielle district in Monte Carlo, and is also home to the principality’s Stamps and Coins Museum (literally steps from the venue). The excellent weather added to the day, which got off to an energetic start with collectors already waiting for the doors to open at 10 a.m. With awaiting dealers representing more than 15 countries, collectors filed in for a satisfying afternoon of buying and selling. Organizers of the bourse commented that there was a significant increase this year over last in the number of new dealers who participated, many of whom attended the auction the day before. On offer was a wide selection of coins, medals, banknotes, and postcards, with the coins ranging from ancient right up to the latest commemoratives as well as bullion-related coins and collectables. As the show grows in popularity with collectors year by year, and as more dealers take part, the selection of coins and other collectable items is steadily improving and becoming more varied, something which was noticeably evident at this year’s Grand Bourse Monaco. 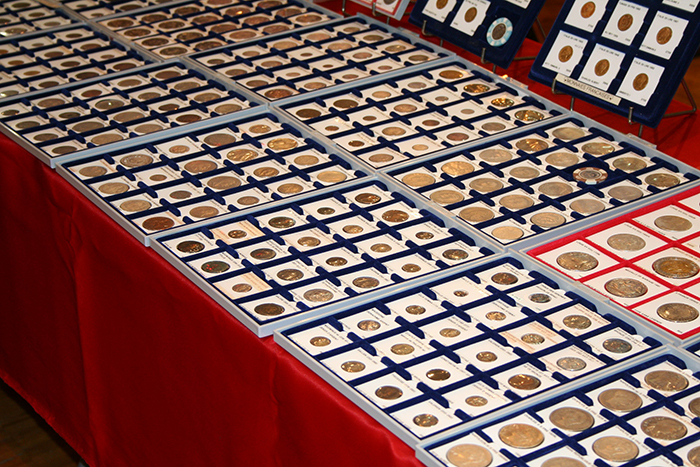 A selection of ancient coins through to the early 20th century. 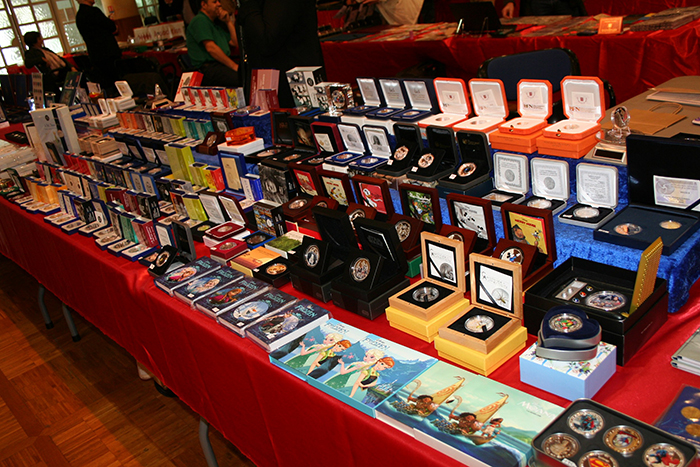 A wide selection of modern collector coins on display. 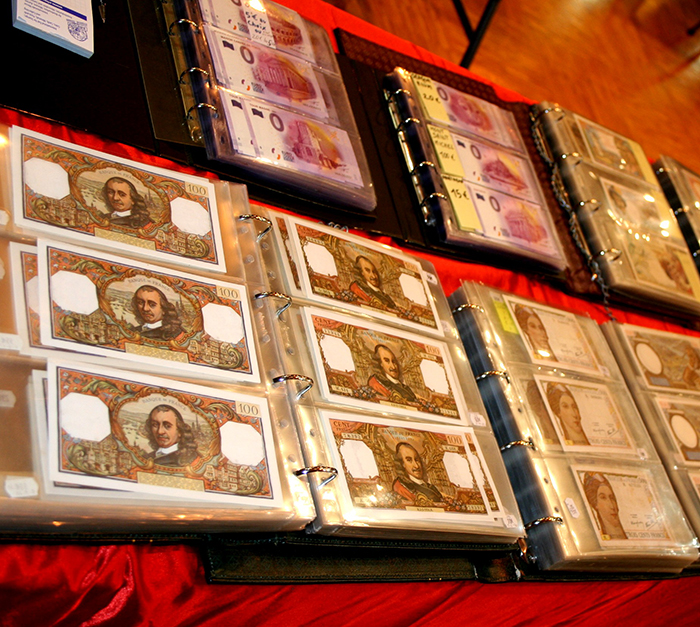 More of the wide array of items available on the bourse.

The principality’s own Association des Cartophiles de Monaco, who are avid supporters of the Grand Bourse, provided a very entertaining and interesting display of postcards. The collection chronicles the development and growth of Monte Carlo and Monaco as seen through the activity of postcard production for nearly 150 years. 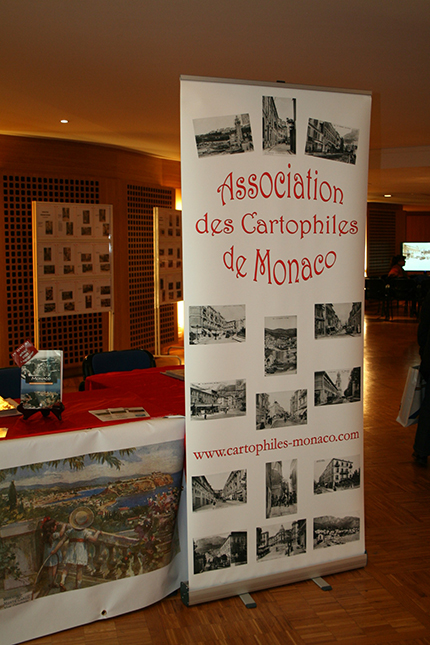 Sign for the postcard display of the Association des Cartophiles de Monaco.

On hand were representatives of Monaco Post, the principality’s postal authority, who were offering commemorative and definitive stamps and limited-edition collector folders for 2016. Also available for purchase on the day was their commemorative postage stamp issued especially in support of the numismatic show. A commemorative stamp supporting the coin show was issued this year; the design is taken from the official poster advertising the show.

The dates for the 2017 Monaco Coin Grand Bourse are tentatively set for Saturday, December 2 (auction), and Sunday, December 3. Entry for this well-organized show is always free, and air travel to Nice Airport from many cities in Europe is both cost-friendly and conveniently frequent. During the off-season, Monte Carlo can offer very reasonable accommodation, which is also available in the neighboring towns of Menton and Beausoliel. For additional information on the Monaco Grand Bourse, please visit the website of the Numismatic Association of Monaco. To participate as a dealer at the next Grand Bourse, or to inquire about their next auction, please contact the organizers, Editions Gadoury: email  or visit their website at http://www.gadoury.com/en. 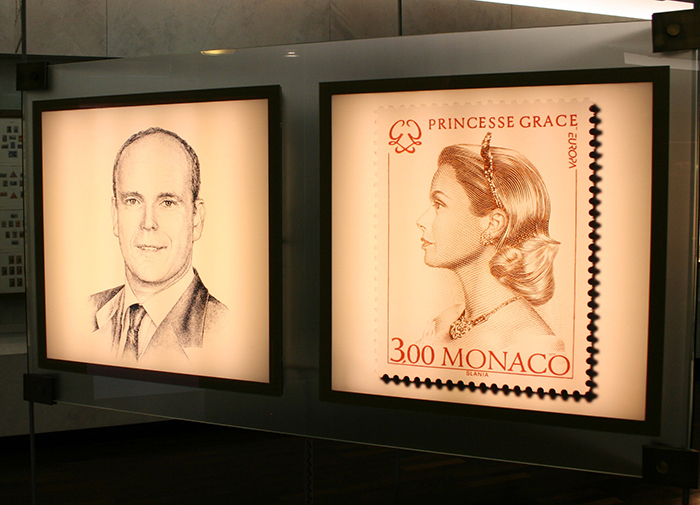 Many readers here will have seen articles regarding the launch and sale of the latest Monegasque collector coins, ranging from the popular and widely sought-after €2 commemoratives to gold and silver collector pieces. Many readers have commented that unless they are actually in Monaco on the day of release or know someone living close to the principality, they find it nearly impossible to obtain these new coins at the official issue price. They then have to rely on online auction sites, which results in very inflated costs far above the issue price. With the last two official releases of collector and commemorative coins, enterprising individuals have literally camped overnight in front of the museum to be the first in line to purchase the new coins, often in lots—with many of those ending up on websites just hours after being obtained. Some are listed well before the date of release with pre-purchase bids, and end up being bought for what many believe are artificially high prices, thus distorting the prospective or investment potential for Monegasque coins on the secondary market.

The Musee des Timbres et des Monnaies—who are one of the official sales points in Monaco—have announced that from June of this year, their offices no longer accommodate over-the-counter sales for new issues. Instead, they have launched a very helpful coin-sales website for any collector who wishes to register as a client to obtain Monegasque collector coins on a first-come, first-served basis. Sales are limited to just two pieces of any new coin per client. It is hoped that this new method will lessen the disappointment of collectors of Monegasque coins while offering more fair and sensible price and distribution. International sales will be dispatched where applicable; credit/debit cards are accepted, and you may register to receive notification of new coins issued by the Monegasque Treasury.

The Musee currently have in stock a selection of some of the previous Euro coins issued, and at very competitive prices. For more information, please visit their website.  ❑