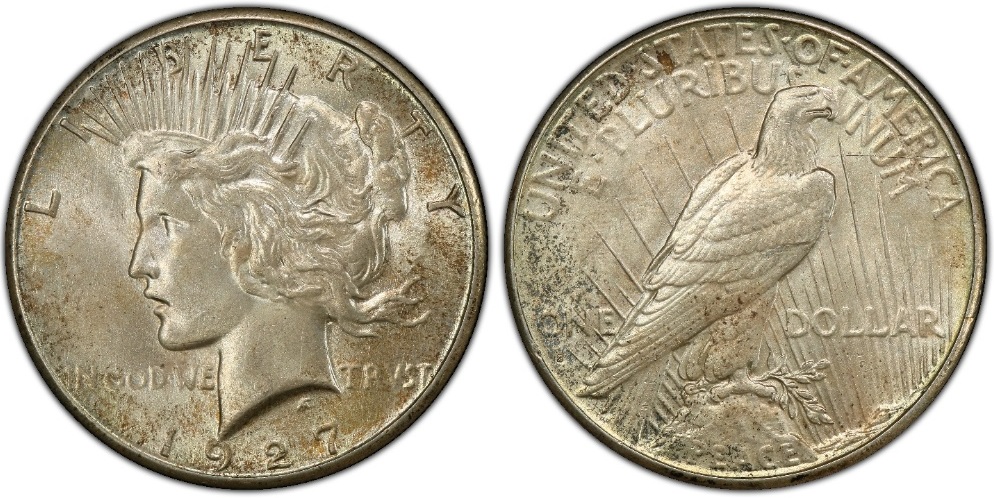 You would think that a coin as large as the Peace dollar, with generous fields, would be easier to grade than most other denominations. But that’s not the case, as they tend to rank as one of the most difficult to grade because so much more than the condition of devices plays a key role in ascertaining a final grade that, perhaps, is not even the final word since so much here is subjective.

Yes, grading is subjective. . . to a point, literally and figuratively, with the major holdering services. When it comes to Peace dollars, that maxim may not hold because of so many variables. In sum, one set of graders may weigh different aspects higher or lower than a different grading team. However, that is not reflected in retail values between Specimens in Almost Uncirculated and Uncirculated conditions. As in other denominations, there is a big jump in value between an AU-58 Peace Dollar and an MS-63 or MS-64 one.

The issue of Mint State versus Almost Uncirculated Peace dollars has confounded even the best numismatic graders. There is an insightful article about this on the NGC website. Researcher David W. Lange writes:

The real problem lies in distinguishing very lightly circulated Peace dollars from those that truly are Mint State. Perhaps no other series has such a high percentage of Specimens that are almost, but not quite, Uncirculated. These usually were purchased as gifts or for some promotional campaign and often were deposited in banks as quickly as they were received.

That’s a fair conclusion. But the problem—distinguishing Almost Uncirculated from Mint State—remains, and the consequences are harsh if you cannot tell the difference.

For instance, a 1927-S MS-64 Peace dollar retails for about $1000 and an AU-58 for about $120. That’s a big jump in price. Moreover, it gives sellers an opportunity to pass off sliders as Mint State coins, costing you plenty if you purchase coins raw or ones in holders by any other company besides PCGS or NGC.

Before we get into specifics, take a close look at the Peace dollar depicted above, a 1927-S with PCGS TrueView. What grade do you give it?

In my view, the obverse of the 1927-S Peace dollar above is in Uncirculated condition. There are two small rim marks, barely visible, one on the cheek by the jaw and another on the neck upward from the “7” in the date. Toning is less than desirable, affecting luster (poor). So I grade this MS-62 or 63.

However, there are two problems with the reverse. The rust toning appears at the critical device of the lower wing and leg feathers, which are weak. There is an unsightly rim mark at two o’clock. All in all, considering tone and luster, I give this an AU-58.

Let’s see how the coin looked when I bid and won it for $195 in a Proxibid auction. 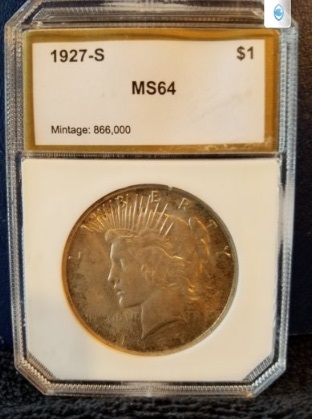 There is really no good way to tell condition other than evaluating the reputation of the holder here. PCI often grades a few percentage points above what NGC or PCGS would grade, but that still puts the coin in the MS-62 range.

The reverse of the coin, again as depicted online, doesn’t provide further clues as to its condition. But it does show toning, and PCI coins often tone well. 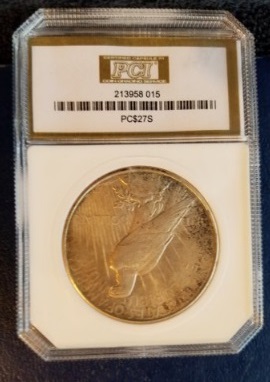 One of the chief drawbacks buying coins online, as I have noted previously, concerns the poor quality of numismatic photos. So I bid accordingly, counting on an MS-62 from PCGS, which should bring $325 minimum and much more if the toning was attracting and rainbow-like (which it wasn’t, as shown in the TrueView photo above).

Unlike Morgan dollars, with the obverse grade playing a major role in the final grade, both sides of the coin in Peace dollars matter, with the lower grade side usually determining the final grade.

True, I could have resubmitted this, trying for a different outcome—and might have, too—if the weakness of the reverse was questionable. Here it wasn’t. I agree with PCGS’s grade.

I share this as a warning concerning bidding on Peace dollars. Cast low-ball bids on any raw coin, even keys such as 1928 and 1934-S, and treat coins in lesser holders as raw. For the record, I’ve had low Mint State Peace dollars in ANACS and ICG holders come back as crossovers to PCGS as Almost Uncirculated, AU-55 and AU-58.

NGC doesn’t consider crossovers in any holder other than PCGS. You would have to crack out the coins, a hazard to both you and the coin, as there are safety concerns. So send your crossover candidates to PCGS, and brace yourself for the outcome. Keep in mind that PCGS allows you to designate a minimum grade you would find acceptable. In my case, with the coin above, I selected “any.”

Any tips or experiences to share concerning grading Mint State Peace dollars? Did you ever purchase a coin billed as Mint State only to receive a subpar grade when submitting it to NGC or PCGS? Do tell in the comment section below!