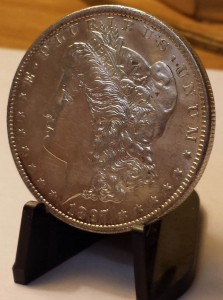 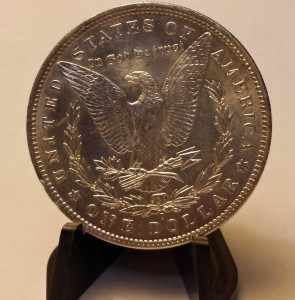 In “Silver Dollars & Trade Dollars of the United States: A Complete Encyclopedia,”  Q. David Bowers writes that the 1897-O Morgan dollar is rare at the MS63 grade, with only 400 to 800 surviving examples. In MS-64, he writes, only 80 to 150 exist and in MS-65, about 50 to 100. I decided to take a chance in a Proxibid online auction where I had been buying most of my raw coins, paying $276 for the above one with buyer’s premium.

Those are my photos above, and they are the real story behind this post. But stay with me on the topic of grading and online purchases.

I’ve been bidding and winning coins on Proxibid for about five years now. In the past, one could score real deals on the portal because several estate auctions came on the block with raw coins that hadn’t seen the light of day since the mid 1980s, when third-party grading companies came into existence. Those auctions today are exceedingly rare. Mostly on Proxibid and eBay, for that matter, the raw coins being offered may be cleaned, altered and/or displayed in such a way as to conceal their real condition.

Take another look at the 1897-O above. The coin seems to have brilliant luster with sharp detail (rare for the typical soft strike of an 1897-O) in an apparent uncirculated condition. So the winning bid of $276 would be quite the bargain and, perhaps, worth the risk.

This is how the coin appeared on Proxibid: 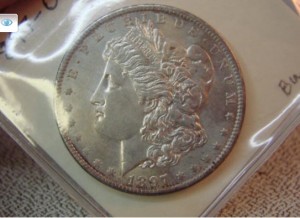 Again, ample luster seems apparent. The older soft plastic flip (that causes PVC [polyvinyl chloride] damage on some coins) indicates that this may be from an older collection, and the paper insert in the flip states “BU.” I usually ignore the grade a consignor gives to a coin. But in older flips like this one, sometimes the consignor accurately describes condition because standards in the 1980s were stricter, by and large, than what we find today.

I’m not blaming the auctioneer in this instance because coin photography is difficult without adequate fluorescent lighting from two sources in a light box. Online auction houses are notorious for their lack of understanding (or effort) with photography, and Proxibid lacks rigorous standards in this respect, unlike eBay, whose coin policy reads:

Would that these be the standards on Proxibid! But I also understand why they are not. Estate auctioneers are not coin dealers. If they dislike terms of service on Proxibid, they can leave it for other rival portals, like iCollector and AuctionZip. That said, however, many auctioneers are new to online portals. They may appreciate how Internet raises bids but are as stubborn as mules when it comes to photography and shipping–another topic altogether.

Okay. Here’s the real condition of the 1897-O which I photographed with a Samsung smartphone: 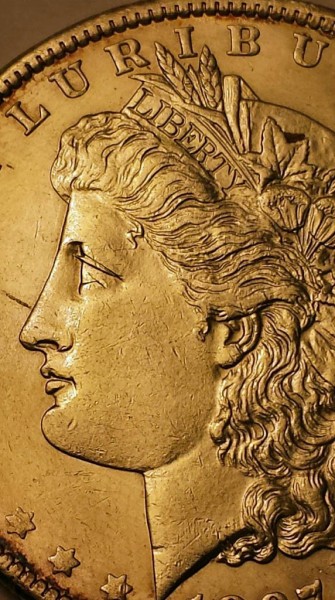 How, you might ask, can the true condition of a coin look uncirculated in one photo and this bad in another?

Take a look at this front-on shot done with my Samsung: 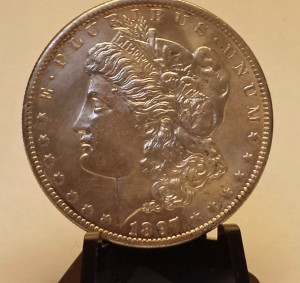 This looks like a straight-on honest photo adequately lit to disclose true condition.

Now take a look at how I photographed it: 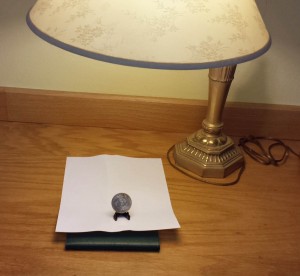 I put the coin on a white sheet of paper with my checkbook (an apt symbol) under the paper so that the coin tilts backward directly under a bright lamp. The white paper disguises the slant, which reflects the direct light so that the coin appears to have full luster.

Look at the blue eye in the upper left corner, and you can see that a person is holding the coin at a slant. Again, I believe this was entirely unintentional. But I suffered the loss because I missed that aspect of the photo. The luster is an unintended camera trick. 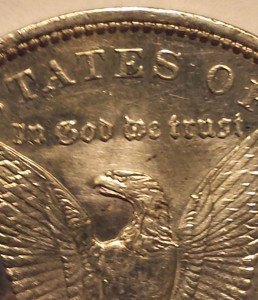 And the reverse of the coin has been cleaned, as is evident in the close-up photo I took with my smartphone.

Which leads me to the “new perspective” about online bidding when it comes to raw coins. Don’t bid … unless you know the auctioneer and can trust his or her coin photography in addition to knowledge of numismatics.

Currently, in my view–and you can disagree with that view–there are only a few regular-selling auction houses on Proxibid whose owners either accurately describe condition and/or take straight-on photos that reveal true condition. There are a others, of course. But based on my buying experience my top two choices are Weaver Signature Coin and Currency Auction and Capitol Coin Auction.

Dave Weaver and Brad Lisembee, auctioneers, describe raw coins in a manner on which I can depend. Lisembee, a coin dealer, also cites the true condition of slabbed coins by second- and bottom-tier holdering companies. 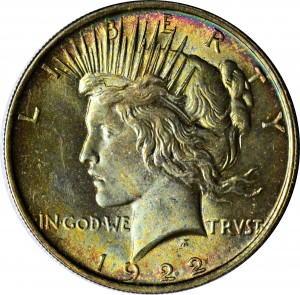 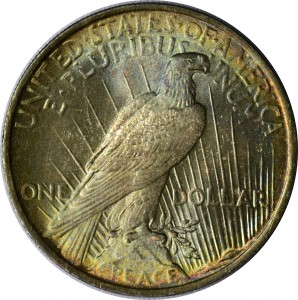 Here is how Lisembee described the coin on Proxibid: “A beautifully toned near-gem. While it is very unusual for a Peace dollar to have this type of toning, it appears to us to be natural. We would be surprised if the toning were not. Looks MS64. A monster if it can get slabbed.”

I sent it to PCGS and it graded MS65. Click here to view the coin in my set registry.

In closing, here are my personal rules henceforth when bidding on raw coins on Proxibid and eBay:

1. Don’t bid unless the seller has numismatic knowledge.

2. Don’t bid if the seller hypes the value of bottom-tier and self-slabbed coins because that is an indication of his business ethic and/or knowledge of numismatics.

3. Don’t bid if the catalog has poor photos or if the coins are photographed at a slant.

Always read the terms of service for each auction house on Proxibid. Remember, almost every seller there has a no return policy. Worse, many charge ridiculous handling fees–one recently asked for $7 per coin plus additional charges for the mailing–and some even ask you to find your own shipper (an indication of how Internet unfriendly estate auction houses can be). Watch for my next post on the dangers of seller policies.

Finally, if an eBay seller has a no-return policy, make sure you can rely on the above three conditions … and, as always, share your own experiences in buying raw coins online (without naming the auction company or seller if you had a bad experience).