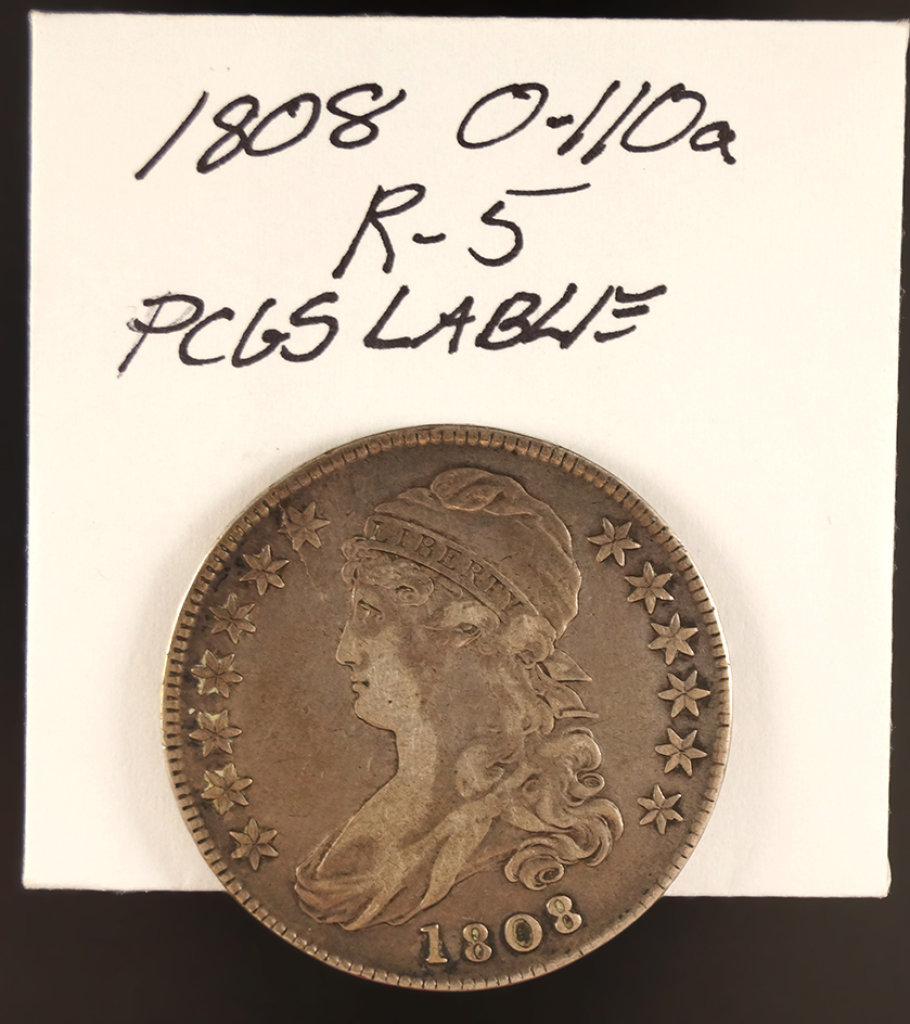 Grading Capped Bust half dollars is a challenge, especially to new hobbyists unaccustomed to the series, which ran from 1807 to 1839 and which continues to be popular because many of the dates are affordable and come with a large selection of die varieties (including overdate strikes).

We’ll save overdates for a future column. This post concerns circulation (business) strikes. The denomination was used heavily in circulation, and that accounts for the typical wear you will see on the high points of the obverse and reverse.

The grading basics of this post concern high points where wear is readily distinguishable: the raised curls on the obverse, along with well-defined star points (especially right-side ones), and cloth folds at the lower bust line, as this photo depicts (for all photos, hover to zoom): 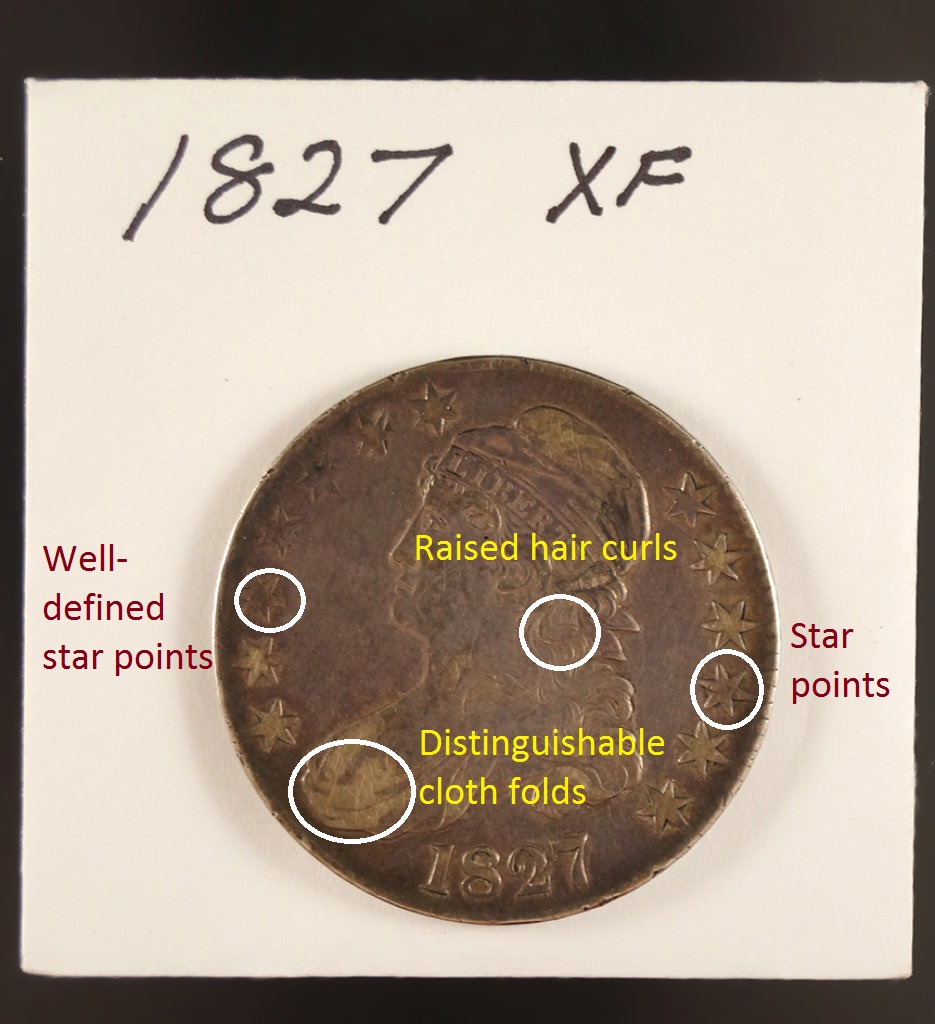 On this 1927 specimen, won with a bid of $94.88 (realized price with 15% buyer’s premium on Proxibid), the star points are well defined, the raised curls have medium wear, and the cloth folds are separated (but just barely).

After making that determination, I go to PCGS Photograde and look for similar conditions in the photographs there. (You’ll have to study the comparisons with a trained eye, and all that requires is continual practice.)

On the reverse of this coin, the top wing feathers are visible, but there is a flattening of feathers on the eagle’s brow: 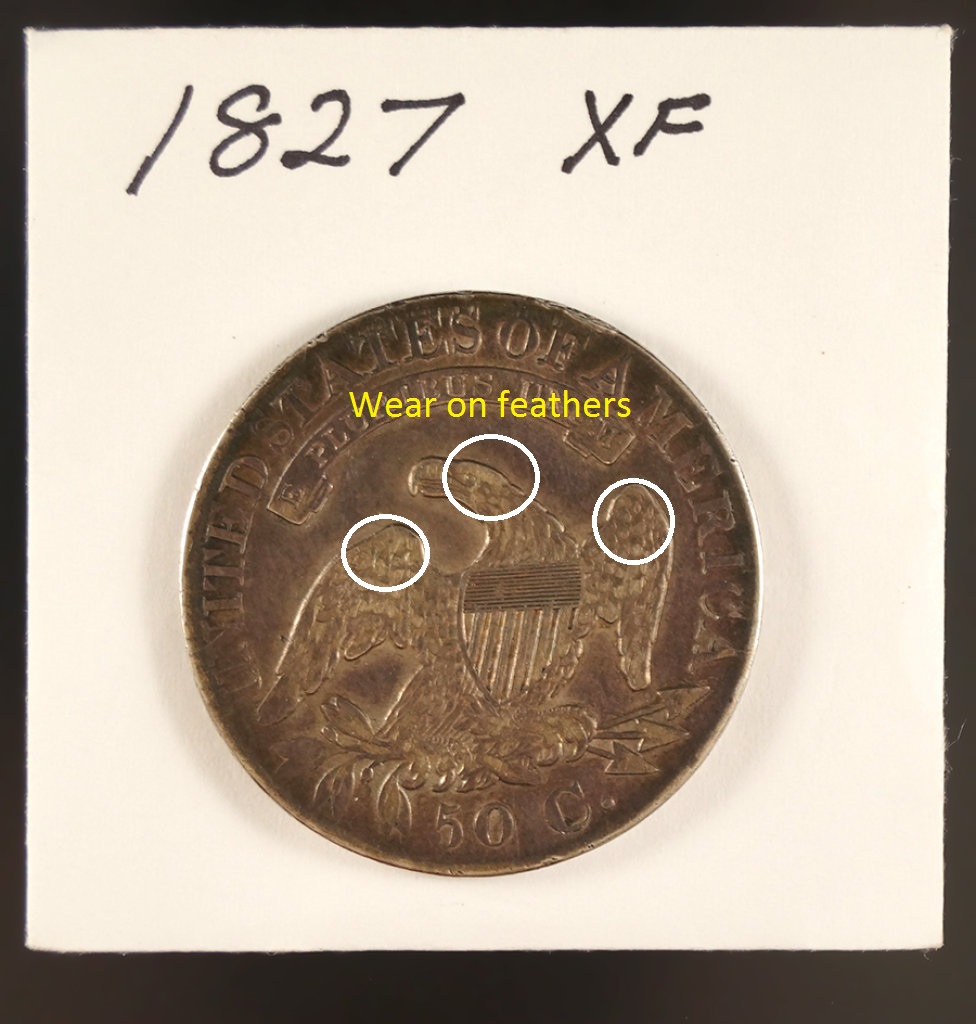 Back to Photograde. Visible feathers on the eagle’s brow show up in almost Uncirculated grades, usually at AU-55. So again, the coin is the EF-40 to EF-45 range. Because the feathers here are more defined than in the Photograde EF-40, I thought the coin was EF-45.

As you can see from the photo, the consignor’s estimated grade is confirmed by my procedures.


This coin is a square base. (Only in the upper grades, beginning from About Uncirculated, does the curl base begin to become more expensive.)

Here’s a photo of those labels with the slabbed PCGS coins from the above submission. The 1925 had been graded VF-35 and was downgraded to VF-30, once again, as we continue to show in my posts over several years, documenting that talk of grade inflation is, in itself, inflated.

Do you collect Capped Bust halves? Are you interested in the series? What are your experiences grading raw coins and submitting them to a holdering company?   ❑

Coin Update sponsor APMEX carries both raw and slabbed Capped Bust half dollars, as well as other classic U.S. coins.