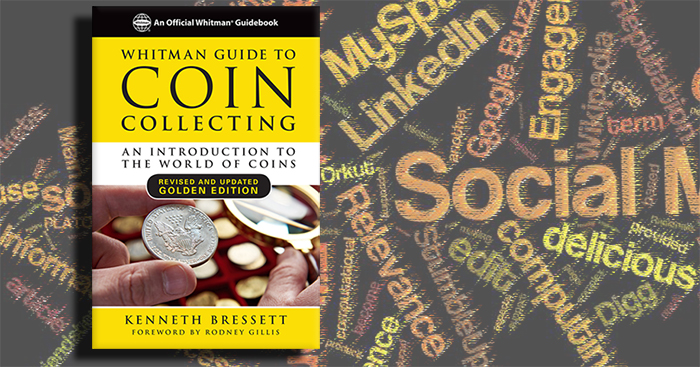 What’s the state of numismatic publishing today? Coin collectors are spoiled! Or at least it feels like we are when it comes to photographs in numismatic books, compared to fifteen or twenty years ago and more. Full color, high resolution, and visual perfection are the order of the day for 21st-century hobbyists.

Earlier this year, though, we took a road less traveled.

In February 2017 I put out a call for “problem coins” to illustrate some of the educational warnings author Kenneth Bressett gives in his new Whitman Guide to Coin Collecting. I asked hobbyists for high-resolution photographs of PVC damage, bag marks, scratches, edge bumps, nicks, dents, and other problems caused by poor handling or storage. (Continued below.) 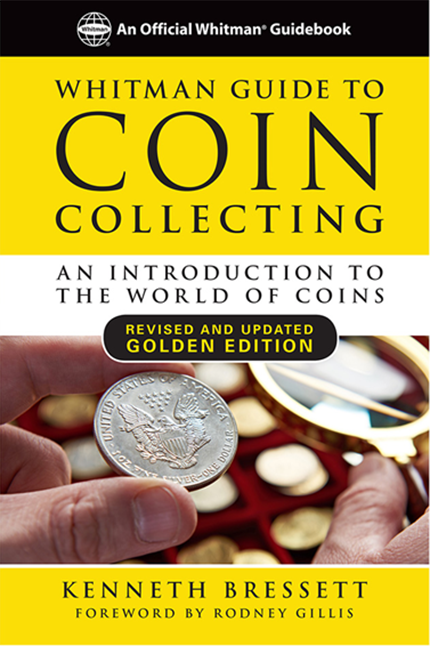 When Numismatic News editor Dave Harper saw our request for damaged coins, he remembered a painfully educational experience. “There are many problem coins out there,” he noted in his column. “Collectors cannot be collectors for long without encountering them.” He recalled a 1940-D Washington quarter he bought when he was a child. After he got the coin in the mail he took it out of its stapled 2×2 holder—and that’s when he saw the deep gouge in its rim. The seller had a “no returns” policy for coins removed from their holders, so Harper was stuck with the damaged quarter. “Problem coins are educational,” he wrote in his column. “I was educated by one. I expect other collectors have been, too.”

In the new Whitman Guide to Coin Collecting, author Ken Bressett—longtime senior editor of the Guide Book of United States Coins, known as the “Red Book”—tells about the dangers of storing coins in polyvinyl-chloride (PVC) holders; the correct ways to handle coins; proper storage and display; and ways to avoid damage to our collections.

Instead of simply telling about the risks and dangers, we decided to show them.

I talked with dozens of collectors from across the United States and Canada, and all together they shared photographs of more than 300 coins.

Syd Martin contributed a Lincoln cent found on the beach, with saltwater damage from exposure to the elements. David Luftig shared a box of Liberty Seated silver coins, all of them stained, holed, scratched, or otherwise damaged. Mike Angelo has an 1807 Draped Bust dime with a wavy indentation, as if someone had tried to bend it.

Professional numismatist Jim Bucki, who writes for The Spruce, shared some frighteningly detailed photographs of advanced PVC damage. The close-ups on page 90 are enough to make you run to your safe-deposit box to double-check all your plastic coin flips and make sure they’re not made of this numismatically dangerous plastic. Cody Charlton also shared photos of green hazing caused by PVC exposure.

Stack’s Bowers Galleries contributed photographs of an 1865 copper-nickel three-cent coin sprinkled with a rash of flyspecks across Miss Liberty’s face. These are small black dots that can emerge over time if you breathe or sneeze on a coin, leaving moisture on its surface. 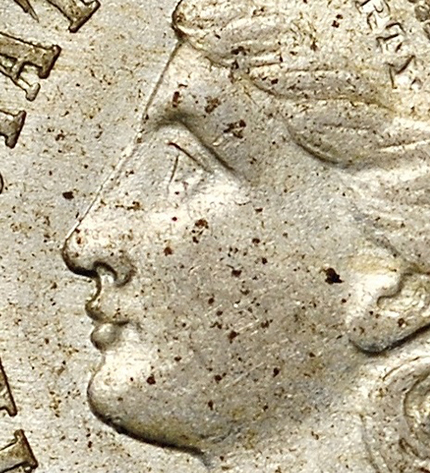 Breathe carefully when studying your coins! The moisture from a sneeze can tarnish into “flyspecks,” as seen on this three-cent piece.

Jon Roche shared photographs of a 1909-S Indian Head cent with Extremely Fine details marred by corrosion, giving Miss Liberty a bad case of chickenpox on her neck and chin. (He told me that it sold on eBay for less than the Red Book value for the same coin in undamaged Good-4 condition.)

From author and educator Bill Fivaz came photographs of an otherwise Mint State Eisenhower dollar with fingerprints on both sides. Bill noted that the coin was part of an Uncirculated Mint Set, still in its sealed cellophane envelope—so much for being “untouched by human hands”! It’s a good example of how fingerprints might not be noticeable at first, but will eventually show up clearly (and sadly, for the owner) on a coin’s delicate surface. 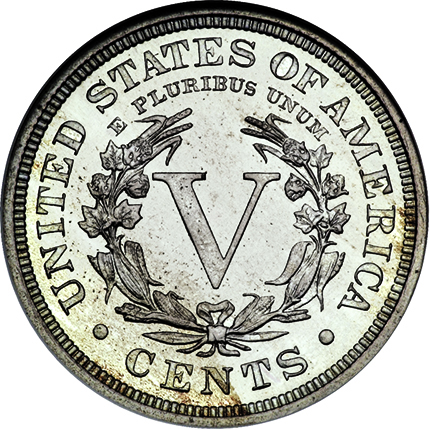 Watch your fingers and thumbs, too. The fingerprint on this 1906 Liberty Head nickel reduces its value—a costly lesson in the importance of handling coins only by their edges.

Some of the crowdsourced coins had been defaced deliberately: Bob Evans has an 1855-S gold double eagle recovered from the wreck of the SS Central America. Some nineteenth-century doodler scratched a pipe clenched between Miss Liberty’s lips, like Granny Clampett smoking a corncob. You’ll see it on page 244. Tom Koolick shared photos of a Buffalo nickel that was notched on its rim, perhaps to be secured into a necklace pendant. Collectors sent us photographs of valuable old coins made worthless by having holes drilled into them. This might have been done to fashion a button, or simply to pass the time with some mindless tinkering.

Other contributors whose photographs were used in the Whitman Guide to Coin Collecting include Kevin Day-Thorburn, Phil Iversen, and Isaiah Hageman.

Our thanks to everyone who wrote to offer their photographs for publication. It was fun hearing your stories and seeing your coins—they might be less than perfect, but they’re still educational. As the old saying goes, “Nobody is completely worthless. You can always serve as a bad example!”

About the Whitman Guide to Coin Collecting

The 288-page softcover Whitman Guide to Coin Collecting debuted July 4, 2017, and is now available from booksellers and hobby shops nationwide, and online (including at the official website of Whitman Publishing, LLC.), for $12.95. It officially debuted at the American Numismatic Association World’s Fair of Money in Denver, August 1–5, 2017.

The guide, popularly known as the “Yellow Book,” includes chapters on coin collecting as a hobby; places to find coins; how coins are made; venues to learn about collecting; getting started as a collector; caring for a coin collection; grading techniques and standards; coin prices and values; commemoratives, bullion, special coin issues, counterfeits, medals, tokens, casino chips, and more.