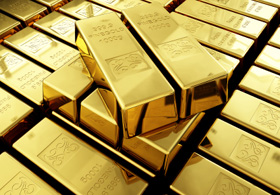 The conventional wisdom among financial analysts who do not specialize in gold is that the metal is in a bubble and that investors should reduce their exposure to gold before the bubble bursts.

I would argue instead that gold is probably not yet a bubble, that it performed remarkably well last week after a major sell-off, and that the fundamentals supporting gold prices have not changed.

Every day one hears television commentators confidently proclaiming the end of the gold bubble. But how can gold be in bubble status when at most 1-2 % of the world’s wealth is in gold? In fact, as of January of this year only .60 % of global assets were in gold, according to the Financial Times of London..

Moreover, most Americans are under-invested in gold. The average American is today selling gold jewelry for needed cash, not rushing to buy gold coins or bars.

In terms of world-wide investor demand, American investors are fourth behind those from China, India, and Saudi Arabia, according to the head of the World Gold Council during an August 31 interview on CNBC.

Much has been made of the fact that when gold hit a new nominal high of $1917 on August 22, the exchange traded fund (ETF) that tracks the price of gold (GLD) surpassed the value of the ETF that tracks the S&P 500.

But in reality the equity and bond markets are far larger than all the gold funds and physical gold in the world. For example, Apple, the most highly valued U.S. company, has a total equity value that is four times that of the GLD.

There is no question that investors have increased their exposure to gold, especially this year, but it is mainly very wealthy Americans, and people in India, China, and other emerging market countries that are doing this. The later are looking to protect their wealth in the face of increasing inflation, while the former are diversifying their assets.

It is often said that gold essentially does nothing. It pays no interest or dividends and just sits there. But at the same time, gold never goes to zero like many stocks, especially bank stocks, have, and it has no counter-party risk.

In addition, stocks are currently at least as volatile as gold is, even though they are supposed to be a much safer asset class.

But consider that for the week it was actually only down about $20. The previous week it closed at $1850 and last week it closed at around $1830, which is hardly a major drop. Even the $200 drop was not that serious in percentage terms. Stocks have had far worse days. Moreover, investors should get used to greater volatility in gold prices as the metal hits new highs.

What is actually remarkable is that despite several recent increases in margin requirements, or the amount futures traders have to put up for contracts, and what should have been disappointing news from Federal Reserve Chairman Ben Bernanke last week, gold recovered most of its decline.

Many investors had expected Chairman Bernanke to announce some sort of new policy of monetary easing, or an extension of maturities on Fed asset purchases, but instead he mainly chastised the Congress for contributing to our recent debt downgrade.

To be sure, gold is currently what analysts called “toppy” given it’s remarkable run this year and over the past decade. Moreover, newer investors should be cautious about buying at these levels.

But the long-term rally undoubtedly has room to continue because the fundamentals supporting gold have not changed.

Some people like to argue that it is not gold that is up, but the dollar that is down. However, that is actually not correct because gold is up substantially, especially this year, in all major world currencies.

A good way to see this on a daily basis is to go to the Kitco web site (http://www.kitco.com) which breaks down every day how much of the change in the price of gold is due to buying or selling the metal, and how much came from dollar weakness or strength.

Gold is frequently described as an asset one buys in case the U.S. or world economies collapse, an “end of the world” investment that mainly gold bugs buy.

In his 2010 book, “Hard Money: Taking Gold to a Higher Investment Level,” Shayne McGuire said that “The world doesn’t have to end for gold to go hyperbolic.” Mr. McGuire is the head of global research at the Teacher Retirement System of Texas and also heads the GBI Gold Fund. His book, which recommends not just bullion but also rare gold coins provided one is not seeking a quick profit, anticipated many of the developments of the past two years and argues that gold may eventually reach $10,000 an ounce.

Today gold is changing as an asset class. It is becoming, and may already be, a new currency. It is not a hedge against the world ending, but a hedge against global uncertainty and future inflation.

The U.S., many economists believe, is on the verge of another recession, while Europe is mired in a debt crisis that is almost certain to get worse. European politicians still seem not to understand the gravity of the crisis, nor are they willing to take the dramatic steps needed to address it. And even if they did, they simply lack the financial resources to bail out countries as large and important as Italy.

Finally, the degree of skepticism about gold’s rally is one of the most bullish signs possible. When average Americans begin buying gold in a significant way, and mainstream analysts are touting gold instead of dismissing it, then it will be time to be nervous about its future prospects.