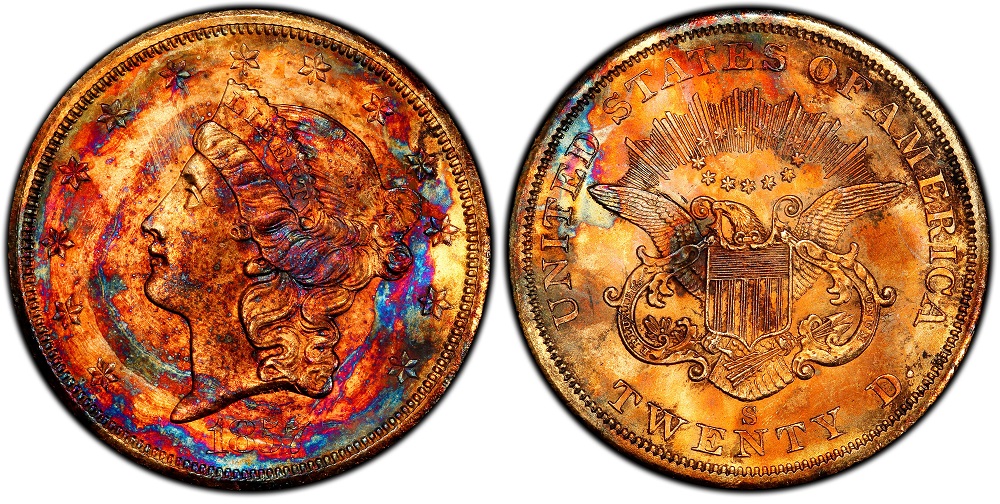 The multi-color toned “Supernova” 1857-S double eagle recovered in 2014 from the “Ship of Gold” shipwreck of the S.S. Central America was sold for a record price of $282,000 by Legend Rare Coin Auctions. (Photo courtesy of Professional Coin Grading Service) Hover to zoom.

(New Orleans, Louisiana) May 18, 2019 — The spectacular 1857-S double eagle, recovered in 2014 from the fabled S.S. Central America and nicknamed “Supernova” because of its amazing, unique natural toning, set a record price for any 1857 San Francisco Mint $20 gold coin in a public auction conducted by Legend Rare Coin Auctions in New Orleans, Louisiana, May 16, 2019.

Described by Legend President Laura Sperber as “the most beautifully and amazingly colorful toned gold coin we have ever seen!,” the sunken treasure double eagle, graded MS-67, sold for $282,000.

“Because it has amazing blasts of colors, we named it ‘Supernova’ after something truly cosmic,” explained Dwight Manley, managing partner of the California Gold Marketing Group (CGMG), which consigned the coin to Legend.

“The Supernova now is part of the Black Cat Collection, a world-class set of coins being built exclusively by Legend. The collection’s owner adores the color and the romance of this coin because it is real California Gold Rush treasure that was recovered from more than 7,000 feet under the sea after 157 years,” explained Sperber.

The Supernova was among piles and stacks of coins that originally were in boxes of double eagles being shipped to New York by San Francisco businesses.

There is only one finer 1857-S double eagle known, graded MS-67+, that also was recovered from the S.S. Central America. It is still held by CGMG as part of a six-coin “Crème de la Crème” type set of the finest known San Francisco Mint Gold Rush-era gold coins assembled by Manley from Ship of Gold treasures brought up in 2014.

CGMG acquired all the sunken treasure brought up in 2014 from Ira Owen Kane, receiver for Recovery Limited Partnership and Columbus Exploration, LLC in a court-approved transaction. CGMG earlier acquired all of the available treasure that was recovered in the late 1980s.

The S.S. Central America sank in a hurricane in September 1857 off the coast of North Carolina while carrying tons of California Gold Rush coins and gold ingots. There were 578 passengers and crew on board, but only 153 survived.