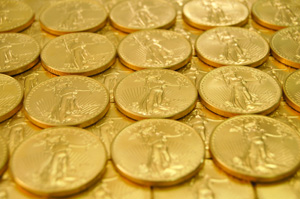 In last week’s column I made the case that the price of silver could be on the brink of a strong recovery.  That is not how things have turned out in the past seven days.  To me, it now looks like it may take as long as September before silver finally breaches the $50 level and keeps going.

I am still more optimistic for a greater percentage increase in the price of silver than gold over the next two years from today.  However, I am thinking that a higher allocation to gold in a division between funds used to purchase gold or silver might now be more prudent than I recommended six months ago.

Earlier this year, my recommended allocation between the two metals ranged from 50% silver for conservative buyers to as much as 66-2/3% for aggressive buyers.  Right now, I am scaling back the aggressiveness to call for a roughly 50-50 split between the two for most everyone.

Over the past decade, silver’s increase has been much higher than that of gold, though both have turned in impressive numbers that put almost all stock indices to shame.  Gold averaged about a 17% compounded increase over that period, while silver averaged well over 20%.

But, in the latest pullback in precious metals prices, gold has dropped less than 7% from its all-time high, while silver has retrenched about one-third.  Both are still significantly higher than the prices at which they ended 2010.  Since the beginning of 2009, the disparity has been far wider, with silver increasing at more than double the rate of gold.

The dollar volume of global gold trading is about 10 times that of the silver market.  As such, you would expect gold prices to be less volatile than for silver.  It is this relative stability that seems to be part of the reason that gold demand has grown in the past few weeks while that for silver has diminished.  The sharp drop in silver prices has probably intimidated some potential buyers, who have discovered they are more comfortable with the relative “safety” of a stable gold price than the potential for a greater gain from the more volatile silver.

While the underlying problems facing the US government, economy, and dollar have not been cured in the past few weeks, the steps that the public might take in response that the perceived risks may have changed.  It is entirely possible that gold’s price may enjoy a greater percentage increase as a result of the general public’s interest in safety, meaning that demand for silver might decrease along with its recent high rate of price increases.  I do expect both to continue to appreciate relative to the US dollar, but the results are likely to be more even between the two metals than has been the case in the past decade.

Whichever precious metals you choose to own, and I would recommend some of both gold and silver, I encourage you to purchase physical forms where you take actual delivery or store it in an independent storage facility under your own name.  I am a lot less comfortable with the safety of owning the various forms of “paper” gold and silver such as commodity contracts, options, certificates of stored metal, unallocated pool accounts, and the like.  To make sure that you aren’t suddenly closed out of your position, I urge you to avoid using leverage to try to magnify your profits.