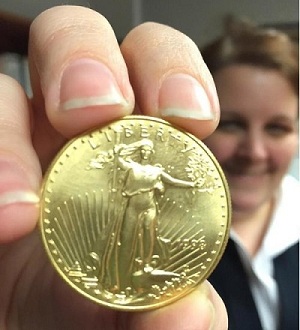 The Salvation Army’s holiday Kettle Campaign is underway and there have been numerous reports of anonymous donors dropping valuable coins into those famous red buckets.

In Geneva, Illinois, a 1998 American Eagle one-ounce gold coin, currently valued at nearly $1,100 for its metal content alone, was found in a Salvation Army kettle after a Christmas Walk event last Friday. Lt. Betsy Clark, commanding officer of the St. Charles Tri-City Corps, wrote on the Salvation Army’s facebook page, “Our community is so generous. An anonymous donor dropped a gold coin in a kettle during the Geneva Walk this evening. Thank you for this great gift!”

Chicago-area Salvation Army volunteers have been fortunate enough to collect other valuable coins this year. In Homewood, Illinois, a one-ounce gold Canadian coin with a denomination of $50, presumably a Maple Leaf, was discovered on December 1, while a 1/10-ounce American Eagle gold coin was donated in Joliet the same day. A 1/4-ounce gold coin, two 1/2-ounce gold coins, and a one-ounce silver coin were also donated at various locations in McHenry County, Illinois.

In Springfield, Ohio, a one-ounce 1978 South African gold Krugerrand was found wrapped in a $100 bill. Springfield Salvation Army Resource Development Coordinator Ryan Ray said of the find, “It seems like every year we’re surprised with what’s put into our kettle. We have no hint of who did this, which kind of makes it cool.”

The donation of rare and valuable coins to the Salvation Army during its Christmas charity campaign has become an annual tradition, giving philanthropic coin enthusiasts a chance to put their impressive holdings to use helping others. The Salvation Army says it’s received over 400 gold coins since the first one appeared in one of their kettles 25 years ago.

The Salvation Army’s Kettle Campaign began in 1891 and collects donations for the organization’s numerous charitable initiatives, including the supply of toys, clothing, and Christmas dinners to families and individuals in need.