The Royal Canadian Mint have issued a new gold coin which remembers an extraordinary chapter during World War II which saw an allied country’s amazing transfer of its entire gold reserves to Canada for safe keeping. Norway’s transfer of its national treasury in gold to Canada was made all the more difficult as it had occurred after the advancing Nazi army had already landed in the country – beginning nearly five years of occupation.

It was on the morning of the 9th April 1940, the Nazis began a massive invasion of Norway with one primary objective of stealing the Norwegian National Treasury, consisting of a massive reserve of 50 tons of gold and gold coins. Out of necessity, the Norwegian government had outlined detailed plan to save the country’s gold and the royal family. As the Nazi invasion began, Luftwaffe war planes landed at Oslo’s airport and Hitler’s solders marched victorious into the capital city. Meanwhile, the gold hoard was already headed out of town barely escaping the invading Nazis. The Bank of Norway, with the help of some of its patriotic employees and a handful of soldiers had managed to secure road and rail transport to move the bullion away from the desperate hands of their invaders. On the night before the Nazis arrived, Bank officials loaded a total of 26 trucks with 50 tons of gold. The trucks sagged under the weight of the precious cargo, everything which made up Norway’s national treasure.

The National Treasury consisted of 240 million Norwegian Kronor in 1940 – approximately $54 million or in today’s worth, $800 million in current worth, weighing around 50 tons. The entire gold deposit was stored at the Norges Bank’s main vault at their headquarters in Oslo. During the increasing tension of the 1930s, plans were devised to make the deposit much more easy to transport should the need arise. With the invasion of Poland in 1939, these plans were accelerated and the gold was packed into 818 crates of 40 kilograms each (88 pounds), 685 crates of 25 kilograms and 39 barrels of gold coins, weighing 80 kilograms each.

With the news reaching the government in the early hours of the 9th April that patrol boats had been attacked off the immediate coast and that enemy ships were approaching Oslo, orders went out to evacuate the deposit to the Central Bank’s auxiliary vault in Lillehammer. Civilian transport was requisitioned and some cranes from nearby businesses were called in to help load the gold onto the waiting trucks. Trucks left one after the other as they were fully loaded, some far over their maximum weight. Just as the last trucks left Oslo, the Wehrmacht marched into the city.
At Lillehammer, the gold remained for a few days until reports came in that the advancing Nazis were approaching. It was decided that the gold was to be loaded onto the train that was also to carry HM King Haakon VII as well as the government of Norway. The Nazis were now aware of the dignitaries and treasure stationed at Lillehammer. The train left on Friday, 19th April and arrived in the port town of Åndalsnes on Saturday, the 20th April. Realising that there was something special about the train, the Nazis began to bomb Åndalsnes several times, luckily though without any damage to the train. The train then moved on to neighbouring Romsdalshorn station, outside of Åndalsnes, in the hopes of sparring Åndalsnes from further bombing raids but the centre of the city was bombed to destruction.

In addition to hosting the King, the Government and the National Treasury, Åndalsnes was also a staging area for British expeditionary troops, who landed at the town and were moved by train south-eastward to meet the Nazis in the town of Gudbrandsdalen. Churchill and the British military authorities were told about Norway’s Treasury at this point, and were relieved to learn of the news of its flight from Oslo with just hours to spare. They were asked by the Norwegians if the gold could be carried by ship to Britain and perhaps onwards to America to secure it. The first of three ships to transport the gold, the British cruiser HMS Galatea embarked from Åndalsnes on Thursday, the 25th April. The British cruiser HMS Glasgow was to take the King, the government and the gold to Tromsø, and from there bring the remaining gold to Britain. However, when they arrived in Molde, the city was being bombed to ruins. The caretakers of the deposit were able to load half of the gold on board the Glasgow. It shipped out on Monday, the 29th April, leaving behind a great deal of gold in Molde. The rest of the gold was transported north to Tromsø using coastal transportation and the coastal steamer Driva was brought to Molde containing the remaining 10 tons of gold which were rapidly loaded. Nazi bombings put an end to this loading with fires and severe damage to the docks posing a great risk the Norwegians were not willing to take. Thirty crates remained in Molde when the Driva shipped out. These crates were loaded onto trucks to be driven north and meet up with Driva in the town of Gjemnes. The Driva was repeatedly attacked by the Luftwaffe several times, and was beached by her captain to avoid sinking. Miraculously, five fishing vessels from neighboring ports were requisitioned to bring the gold from Gjemnes, in the hope that the Germans would not suspect them and the gold arrived at Gjemnes without incident. The HMS Glagow transported King Haakon and Crown Prince Olav of Norway as well as the remainder of the Norwegian gold reserves when they fled from Molde to Tromsø, escaping the advancing Nazi forces in their country.

The remainder of Norway’s gold was loaded on the British cruiser HMS Enterprise which departed Harstad the same day with the last 19 tons of treasury gold. The cruiser first sailed to Scapa Flow, surviving two Luftwaffe attacks on the way, and then proceeded to sail to Greenock where the gold was brought ashore. Once in Britain, it was rapidly brought by train to London and stored in the vault of the Bank of England. A decision was made by the government-in-exile to bring the gold to Canada, and it was shipped over the Atlantic in installments. The Norwegian Minister of Finance happily reported to the government that of the 50 tons of gold that initially left Oslo, only 297 gold coins were missing due to a barrel which was damaged during transportation in a British vessel. Norway’s gold remained in Canada, and was gradually sold there – partly to fund operations of the government in exile. Ten tons of gold coins were eventually repatriated to Norway in 1987. 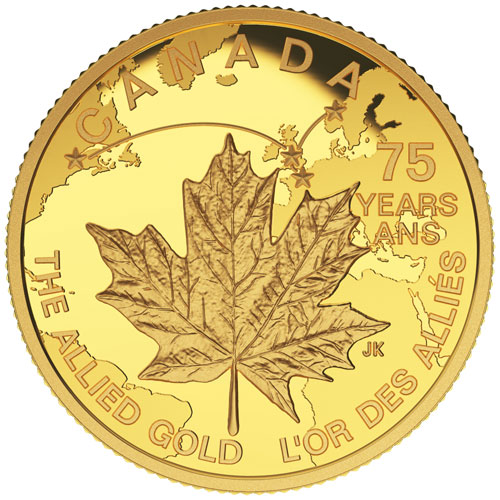 The reverse image designed by Canadian artist Joel Kimmel highlights the route taken by the Norwegian gold to Canada by way of England. This coin’s symbolically rich reverse design is layered over a stylized map showing northern Europe, the Atlantic, and eastern Canada. Four stars mark strategic regions of gold movement from Europe to Canada during the war, including Norway, England, France, and Canada. Engraved over the map is a maple leaf whose left side is from a Canadian sugar maple and whose right side is from a Norway maple. The reverse is also engraved with the bilingual commemorative text “THE ALLIED GOLD/L’OR DES ALLIÉS” and “75 YEARS/ANS” and the word “CANADA.

The obverse includes the effigy of HM Queen Elizabeth II as designed by Susanna Blunt and in use on circulation and commemorative Canadian coins since 2003 along with the coin’s denomination.