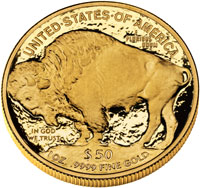 The United States Mint will begin sales of the 2010 Proof Gold Buffalo on June 3, 2010. This is the collector version of the popular 24 karat gold bullion coin.

Sales of the bullion version of the coin recently began on April 29, 2010. Sales to date have have reached 61,000 of the one ounce gold coins. The bullion coins are sold through a network of authorized purchasers who distribute the coins to other dealers and the public, as well as facilitate a two way market.

The proof version of the 2010 Gold Buffalo will be sold directly by the United States Mint. Proof Gold Buffalo coins have been offered each year since 2006. For the first two years, only one ounce proof coins were produced. During 2008, the US Mint vastly expanded offerings with fractional proof coins and fractional and one ounce uncirculated coins. The additional coins were canceled before the end of the year, with plans to resume issuing one ounce proof coins only.

The 2009 Proof Gold Buffalo went on sale October 29, 2009 after months of uncertainty about the status of the offering. The US Mint offered the coins without a maximum mintage or household ordering limits, initially priced at $1,360 each. Sales continued until March 29, 2010 when a sell out was announced. The last reported sales for the product was 49,388.

The US Mint plans to offer the 2010 Proof Gold Buffalo coins in one ounce size only. Pricing will be determined based on the average price of gold and subject to adjustment as frequently as once per week in response to changes in the underlying value of gold. For an average weekly gold price within the $1,150 to $1,199.99 range, the coins would be priced at $1,460 each. The US Mint has not announced whether the coins will be subject to a maximum mintage or household ordering limits.