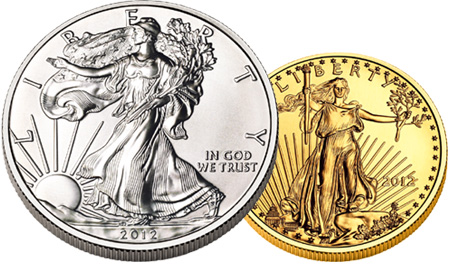 For the month of February 2012 to date, the US Mint has recorded sales of 835,000 of the one ounce American Silver Eagle bullion coins. These coins are made available by the United States Mint to a network of primary distributors, known as authorized purchasers, who may purchase the coins based on the market price of silver plus a fixed mark up. From there, the coins are resold to secondary dealers and the consumer market.

Meanwhile, month to date sales of the American Gold Eagle bullion coins have reached 15,000 ounces. Sales include 14,500 one ounce size coins and 2,000 one-quarter ounce sized coins. These bullion coins are also distributed through the network of authorized purchasers, with the cost based on the market price of gold plus a percentage mark up.

The US Mint has also continued to sell remaining inventories of 2011-dated American Gold Buffalo coins. These bullion coins are struck in 24 karat gold and available in one ounce size only. For the month of February 2012 to date, sales have reached 3,500 coins.

The 2011-dated America the Beautiful Silver Bullion Coins also apparently continue to be available for ordering by authorized purchasers. For the month to date, the US Mint has not indicated any sales taking place.