The Reserve Bank of Zew Zealand, in conjunction with New Zealand Post, has issued two stunning new coins which highlight some of the most recognizable and distinctive styles of art, that of the native Maoris of New Zealand. 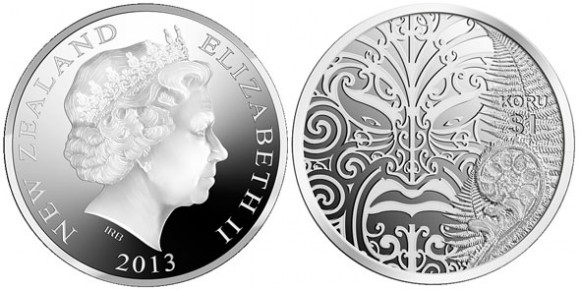 This year’s Maori Art Coin celebrates the koru as an integral part of Maori art and culture, and as a symbol of renewal. The koru is a spiral shape based on a new unfurling silver fern frond which symbolizes new life, growth, strength and peace. The unfurling silver fern frond, which will grow into a rauponga, or fern leaf – which is the national symbol of New Zealand. The surrounding artwork represents the domain of Tane Mahuta, the God of the Forest. Tane is depicted through a series of koru patterns and is watching over his domain – in which countless piko shoots will grow into established ferns. 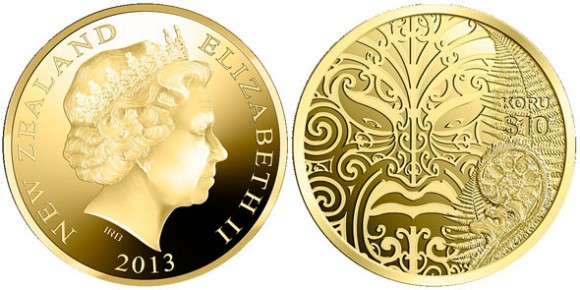 The intricate design features the koru and rauponga beautifully engraved with three-dimensional relief, giving the coins incredible depth and dimension. The depiction of Tane Mahuta contains striking contrasts between the frosted koru and the polished background – resulting in visually stunning coins that capture so much of the culture and art of the Maori. The two coins, one gold and one silver are designed by Dave Burke, a graduate of the Otago School of Fine Art and produced at the Royal Australian Mint on behalf of the Reserve Bank. The reverse, common to both versions includes a depiction of  Koru, ferns and Tane Mahuta – God of the Forest. The coin’s denomination is placed to the right half.

The obverse of both coins includes the Ian Rank-Broadley portrait of HM Queen Elizabeth II used on New Zealand coinage since 1999.

The silver coins are presented in custom designed mangopare (hammerhead shark) patterned boxes while the gold coin is housed in a waka huia (ornamental carved vessel for taonga) designed by Dave Burke and carved from a 50,000-year old New Zealand swamp kauri.

For more information on these and other coins offered by the Reserve Bank of New Zealand, please visit the website of New Zealand Post at: http://coins.nzpost.co.nz/new-zealand/2013/maori-art-koru International orders fulfilled.