The Royal Dutch Mint has launched a series of coins which marks the 200th anniversary of the founding of the country’s Central Bank. Organized in 1814, one of King Willem I’s first official actions after assuming the new unified Dutch throne was to sign a Royal warrant setting up and establishing de Nederlandsche Bank (DNB). The King’s goal was to facilitate economic growth while ensuring financial stability. 200 years later, it is still DNB’s primary purpose especially since joining the EURO system of banking with the adoption of the Euro single currency in 2002. After two centuries, the functions of this esteemed institution focuses on three areas: monetary policy, payment transactions, and supervision. As the Netherlands prepares to celebrate the 200th anniversary of the official establishment of the Kingdom of the Netherlands next year, the bi-centenary of the establishment of the Dutch Central Bank is one of the country’s most important national anniversaries.

The ‘de Nederlandsche Bank’ five & ten Euro coins are designed by Michael Guilfoyle, who designed last year’s “Three Kings” silver medallion issued by the Royal Dutch Mint on the occasion of the accession of King Willem-Alexander. The new commemorative coins feature several references to bank notes, including refined calligraphy patterns that used to serve as a security measure for earlier bank notes. In addition, the coin’s design includes micro-text, introduced in the latter half of the 20th century which was also used as a security feature on banknotes and more recently, on coins.

A special color set for the ‘de Nederlandsche Bank’ five euro coins contain three Silver Proof coins with color, as well as three colored silver miniature bank notes of 10, 25 and 50 guilders of the previous series, (c. 1968 to 1984). The coin colors correspond with the banknote colors. The obverse of the coins includes corresponding artwork from the reverse design depicting calligraphy around a smooth outline profile of HM King Willem-Alexander along with the text “WILLEM-ALEXANDER KONING DER NEDERLANDEN” and the year of issue “2014” below. 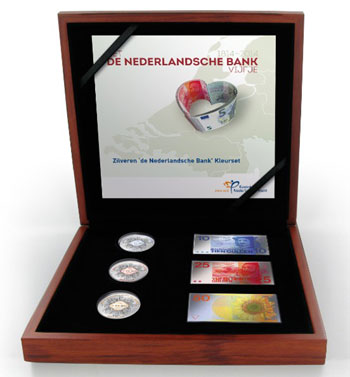 The three colorized coins are available in the set only and are housed in a custom wood presentation box limited to 1000 sets with numbered certificate. The 10 €URO gold coin is also available as a single item or product. For more information on these and other coins offered by the Royal Dutch Mint, please visit their website at: http://en.knm.nl/