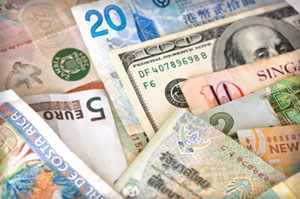 It seems apparent to me that, taken in total, the financial news points to a heightened risk of a near term major meltdown in the developed economies.

Without going into details, let me just remind you of some of the issues that may be on the brink of exploding:

While this would be a disaster for developed countries, it would not necessarily be a catastrophe for a large number of developing nations.  That is because many of these countries are not that dependent on the same artificial financial machinations practiced in the developed nations.

One thing that is virtually certain is that when (I don’t think it is any longer a question of “if”) some of these issues become a nightmare, the values of currencies in general will decline and precious metals prices are bound to take off.

Think about it.  If you were right now offered a choice of US dollars equal to the value of an ounce of gold or the ounce of gold itself, which would you chose?  There are a lot of people in enough financial trouble that would be compelled to choose the US dollars.  Those who are financially comfortable enough to not need immediate cash are more inclined to choose the gold.

Since the price of gold (and, to a lesser extent, silver) represents a report card on the US government, the US economy, and the value of the US dollar, the US government has every incentive to try to suppress precious metals prices.  The older US government documents that have been released reveal that the US has manipulated the gold market since right after the end of World War I in 1918.  The manipulation of the gold market as recently as the 1970s has been confirmed by some of the recently released documents.  There is much circumstantial evidence that the US government has been continuing this manipulation right up to today.   This circumstantial data is more credible when you consider the huge incentives that the feds have to engage in such activities.

But, as major calamities unfold, it will become pretty much impossible to keep gold and silver from skyrocketing in price.  The relative bargain prices of gold and silver in the past week may not last long.

However, as the developed world comes closer to the financial precipice, I expect even more extreme efforts to hold down gold and silver prices.  There may still be a few opportunities to acquire gold and silver at the bottom of the current market.  Just don’t count on it.

My July 13 column discussed the specter of a soaring increase in identity theft that is almost certain to occur.  This will happen as millions of American businesses have to start collecting confidential tax information from massive numbers of people, starting in 2012, in order to send more 1099 Forms to the Internal Revenue Service.  This column has generated a tidal wave of reaction.

On July 20, I was interviewed by a reporter for ABC News on this subject.  His story was posted on ABCNews.com on July 21 under the title of “Gold Coin Sellers Angered by New Tax Law.”  This story created a storm of response, resulting in my appearance on the “Money Rocks” program on Fox Business News television on July 23 (Eric Bolling is the host).  In both instances, I tried to make it clear to the media that a major concern I had was the impending huge increase in identity theft that is virtually certain to occur, but that issue did not end up in the finished product either time.  This catastrophe-to-happen of Section 9006 of the new Obamacare legislation is so important that I will continue to try spreading the message on this issue.  At least readers of this column can appreciate that you heard this kind of news a week earlier and that you got more of the story than what was covered by the mainstream media.