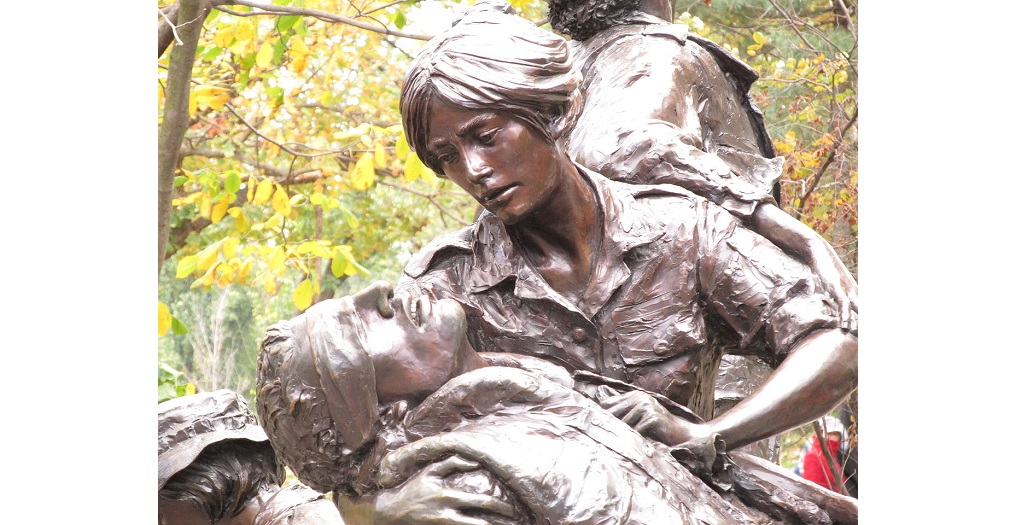 The monument at the Vietnam Women’s Memorial, designed by Goodacre.

New Mexico artist Glenna Goodacre—well known to coin collectors as the designer of the Sacagawea dollar—has died of natural causes at the age of 80. She passed away at her home in Santa Fe on the evening of Monday, April 13, 2020.

Goodacre was an artist of monumental sculptures including the Vietnam Women’s Memorial (part of the national Vietnam Veterans Memorial), situated on the National Mall in Washington, D.C., and dedicated in 1993. Her Irish Memorial (2003), installed at Penn’s Landing in Philadelphia, is a massive monument of 35 life-size sculptures dedicated to America’s millions of Irish immigrants. Her delightful and energetic sculpture The Puddle Jumpers is in Montgomery, Alabama. The Smithsonian Art Inventory describes it:

Six running children, three boys and three girls, are preparing to jump into a puddle. The children are holding hands and are in various states of motion. Three of the figures are anchored to the ground, though all have the appearance of being suspended in air. The figures wear play clothes and are all smiling and laughing.

Goodacre’s portraiture included a bronze statue of Ronald Reagan, After the Ride, displayed at his Presidential Library in California. She created a full-length figure of ragtime composer Scott Joplin, a striding depiction of General Dwight D. Eisenhower, and many other impressive sculptural portraits. 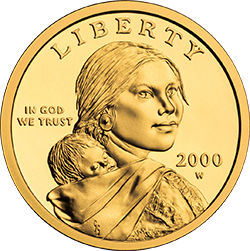 To numismatists, however, Glenna Goodacre will forever be remembered in the popular Sacagawea dollar, the first “golden dollar” of the United States Mint. Her design for the coin’s obverse features Shoshone Indian interpreter and guide Sacagawea, who helped explorers Meriwether Lewis and William Clark on their famed journey westward from the Great Northern Plains to the Pacific Ocean. She depicted Sacagawea carrying her infant son Jean Baptiste, known as “Pomp.” The figures were from Goodacre’s creative imagination, as no contemporary portraits of the subjects are known to exist.

Goodacre’s design was central to the Sacagawea dollar coin issued from 2000 to 2008 (with an eagle-in-flight reverse design by Thomas D. Rogers Sr.). Since 2009 it has been the obverse of the Native American series of dollar coins, issued annually with a new theme on the reverse each year.

The artist received $5,000 for her work on the new dollar, in the form of 5,000 specially burnished and surface-treated coins—a format unexpected by her and unannounced in advance.  Q. David Bowers, the “Dean of American Numismatics,” describes the unusual payment, which proved to be a bonanza:

At the time the Mint was having some problems with discoloration, and [this burnishing] was the way to prevent that from happening with coins that no doubt would be given away or otherwise distributed by Goodacre, rather than being spent. . . . These were delivered to her Santa Fe, New Mexico, studio by Mint Director Philip Diehl accompanied by two Mint police officers. A special ceremony was held there on April 5, 2000.

The coins were slabbed and graded with special labels, with Goodacre keeping 2,000 for herself and the rest being sold.

Bowers, a longtime fan of Goodacre’s, who wrote extensively on her work in the Guide Book of Modern United States Dollar Coins, remembers the artist with this tribute:

The numismatic community regrets the passing of sculptor Glenna Goodacre. Her creativity will live forever with her design of the Sacagawea “golden dollar,” the portrait of which is still being used for new issues. While over the years most coin designs have had their share of critics, not so with the Sacagawea dollar. Everyone loves it! As a side note, millions have circulated as money in Ecuador (which uses American dollars as currency). Many citizens there think the portrait is of an Ecuadorian child. Today, the Sacagawea dollar varieties are very affordable, and I suggest that there is room in every collection for a nice group of these.

Jeff Garrett, a professional numismatist and senior editor of the Guide Book of United States Coins, recalls meeting Goodacre. Garrett enjoyed the honor of helping her sell her coins:

We are all saddened by the news of Glenna Goodacre’s passing. She was known throughout the numismatic community for her iconic design of the Sacagawea dollar. We met in 2010, when I was asked to dispose of her remaining “special issue” 2000 coins. Glenna was one of the most successful female sculptors of all time. The country has lost an amazing artist and a wonderful person.

Robin Salmon, Brookgreen Gardens’s vice president of Art and Historical Collections and curator of Sculpture, and currently a member of the Citizens Coinage Advisory Committee, which reviews American coin designs, describes Goodacre as “a remarkable woman and a good friend who never met a stranger. Her artwork continues on as powerful testimony to her love of family and the beauty of the human spirit.”

Greg Weinman, senior legal counsel at the United States Mint, who worked closely with Goodacre during the design and launch of the Sacagawea dollar, also remembers the artist as “a good friend and one of my favorite people in the world.”

The numismatic community joins Glenna Goodacre’s family, friends, and many fans in mourning her loss and celebrating her art.