(Long Beach, California) February 19, 2018 — Many of the historic English coins that will be displayed at the February 22-24, 2018 Long Beach Expo in the upcoming inaugural exhibit of rarities from the privately owned Tyrant Collection are so rare that they were seen only in European museums. Some of the coins in the “Tyrants of the Thames” exhibit have never before been publicly displayed in the United States.

For three days, it will be possible to examine up-close examples of these coins as well as popular styles and designs such as superb coins of Queen Victoria. The anonymous owner of the Tyrant Collection wants the public to see these coins in person for their educational value.

Veteran professional numismatist and English coinage specialist Bruce Lorich, on behalf of the Tyrant Collection’s anonymous owner, has cataloged the more than 500 “Tyrants of the Thames” exhibit coins to be displayed at the February 2018 Long Beach Coin, Currency, Stamp & Sports Collectible Expo in Long Beach, California. This is the fourth in a series of four articles by him about the historical significance of some of the coins in this unprecedented exhibition.

A gold sovereign of King Henry VIII, issued from 1526-1544, was the largest coin of his turbulent reign and is one of the great treasures in the “Tyrants of the Thames” exhibit at the February 22-24, 2018 Long Beach Expo. Photo credit: Professional Coin Grading Service. Hover to zoom.

Among the many special qualities of this exhibit are exceptionally fine examples of gold coins issued by England’s kings and queens, including almost every style and denomination of coin made during the Middle Ages and Renaissance periods. These historical coins present viewers with images of the rulers as well as their emblems of royalty, which are part of the coins’ designs. Dozens of hammered gold rarities will be on view, among the most important being a marvelous, lustrous gold sovereign (1526-1544) of King Henry VIII certified and graded MS-63.

Beginning with Oliver Cromwell’s coinage of 1656-58, England turned to modern-looking coins made by machine, called “milled” issues. The exhibit will portray the entire history of milled gold coinage beginning with one of the finest known of Cromwell’s gold Broad of 1656.

The exhibit continues chronologically from Charles II to Elizabeth II. The most impressive are the largest pieces called five-guineas, which were made from the 1660s through the 1770s. Every type is present in this collection and will be on display. These include the extremely rare five-guineas 1670 Proof of Charles II, and five-guineas of all the styles of the Stuart kings and queens, including a wonderful example of the exquisite 1701 Fine Work design for William III. There are examples of all the five-guinea types minted for the Hanover monarchs beginning with George I, perhaps the most spectacular coin being the pattern Young Bust 1770 of George III. Each of these coins ranks among the finest known.

Near the end of King George III’s long reign, a series of new denominations emerged, called the New Coinage. The largest gold issues were the five-pounds, replacing the earlier five-guinea coins. One of the great rarities of this series is the 1820 pattern, engraved by Pistrucci and struck at the Tower Hill Mint in London, and a lovely example appears in the Tyrant Collection display. George IV’s large gold Proof of 1826 in this collection is a superb piece, as are two examples of the young Queen Victoria’s famous Una & the Lion issue. Her 1887 Jubilee Head and 1893 Veiled Head five-pound coins are also shown in superb Proof conditions.


Victoria’s son Albert became King Edward VII in 1902, and his Matte Proof set is infamous for often being marred by abrasions and hairlines. However, the Tyrant Collection exhibit will show a truly magnificent and rare example. George V’s 1911 five-pound is represented by another superb piece, in brilliant Proof. 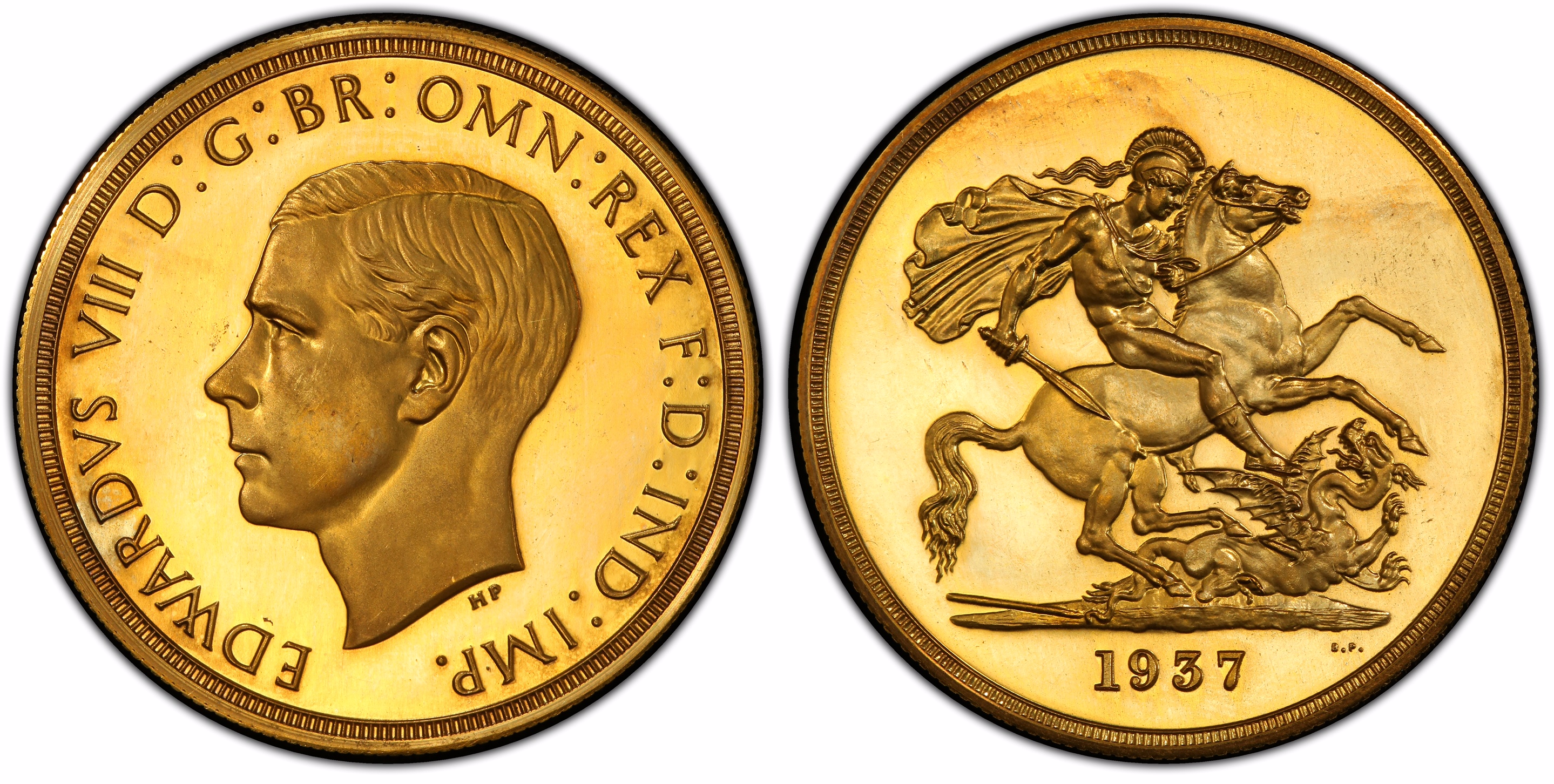 The only complete 1937 Edward VIII Proof set in private hands will be displayed for the first time in the United States as part of the Tyrants of the Thames exhibit at the February 2018 Long Beach Expo. This coin from the historic set is the gold Proof five-pounds. Photo credit: Professional Coin Grading Service.

Next comes one of the rarest coins of the world, the gold five-pounds of the abdicated King Edward VIII dated 1937. The Tyrant Collection contains the only privately owned complete set of Edward VIII’s coins, and the five-pound coin in the set is a splendid Proof.

When Edward abdicated, his younger brother became king, and his coronation set of 1937 was typically a brilliant Proof assemblage. In the “Tyrants of the Thames” exhibit, his five-pound coins are represented by two pieces, the normal one having brilliant surfaces and the special Matte Proof of extreme rarity. Each of these coins possesses wonderful eye-appeal, and each is part of a complete set.

Elizabeth II’s coins in the main are commonly available. Each type is on view in this exhibit, but two are so rare that this could be the public’s only chance ever to see them. The first is the 1953 gold proof sovereign, one of perhaps as few as two in private collections. Queen Elizabeth’s coronation occurred in 1953; as a result of World War II’s financial impact on the country, the Royal Mint issued no gold coins for collectors in that year, and just a handful of pieces were struck for the queen and for museums. 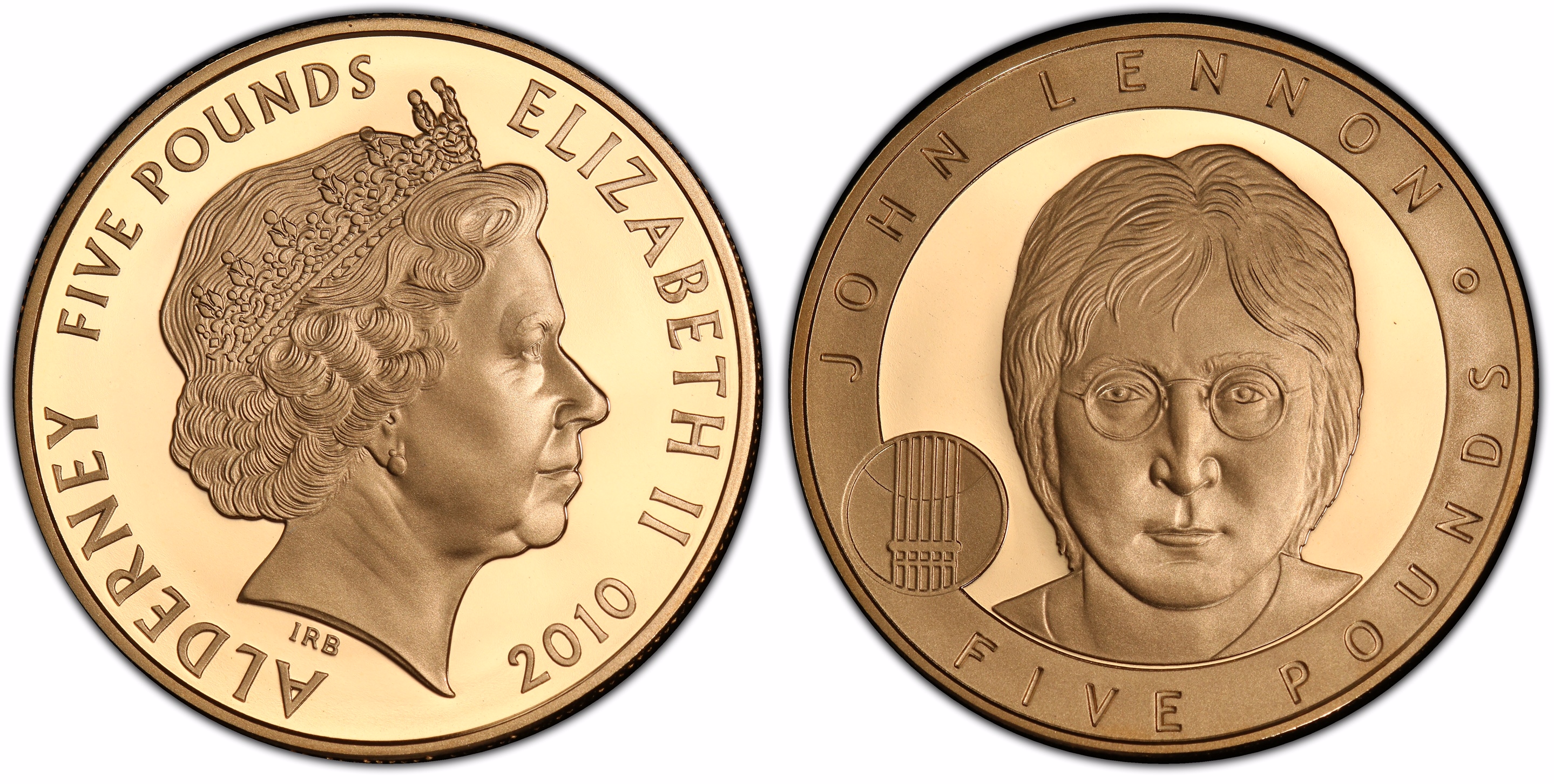 A unique 2010 gold five-pound coin depicting Queen Elizabeth II and musician John Lennon was given to Lennon’s widow, Yoko Ono, who subsequently donated it to an auction to benefit a children’s hospital in Liverpool, England. It will be displayed for the first time in the United States at the February 2018 Long Beach Expo. Photo credit: Professional Coin Grading Service.

The other great rarity in the collection is a unique five-pound gold Proof dated 2010 which shows the queen’s portrait on one side and a front-facing image of the famous musician John Lennon on the other side. This coin was made by the Royal Mint for collectors in silver. A single piece was struck in gold as a present for Lennon’s widow, Yoko Ono, who auctioned it and donated the proceeds to charity. It is now part of the Tyrant Collection and will be on view in this special exhibit.

All of the other types of milled gold coins of England will also be shown as part of the Long Beach display, alongside the larger pieces mentioned above. These include the two-guineas and two-pound issues, the guineas and sovereign issues, and their halves. Many are rarities, but all of the types are represented by beautiful examples.

All of these coins will be on display in the Tyrants of the Thames exhibition at the February 2018 Long Beach Expo. The one-of-a-kind exhibit is being presented by the Tyrant Collection’s anonymous owner with the assistance of Ira and Larry Goldberg Coin & Collectibles of Los Angeles.