The design selections for the 2013 Girl Scouts of the USA Commemorative Silver Dollar were unveiled on September 22, 2012. The unveiling occurred at the 100th Anniversary Experience Exhibition Preview and Dinner Under The Stars hosted by Girl Scouts of Northeast Texas. 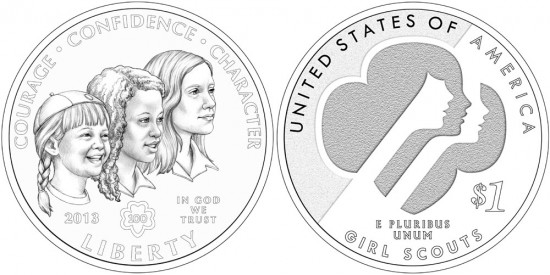 The obverse design of the coin depicts three girls to represent the different ages and diversity of the Girl Scouts of the USA. Inscriptions above the image include the words “Courage”, “Confidence”, and “Character”, which are key elements of the Girl Scouts mission statement. Inscriptions below include the “2013” date, “Liberty”, the motto “In God We Trust”, and the 100th anniversary Trefoil symbol. The obverse was designed by United States Mint Artistic Infusion Program Master Designer Barbara Fox and will be sculpted by US Mint Sculptor-Engraver Phebe Hemphill.

The reverse design features the trefoil/profiles symbol of the Girl Scouts of the USA. Inscriptions include “United States of America”, “E Pluribus Unum”, and “Girl Scouts”, with the denomination expressed as “$1”. The reverse was designed by Artistic Infusion Program Associate Designer Chris Costello and will be sculpted by US Mint Sculptor-Engraver Joseph Menna.

Initially, the United States Mint had prepared eleven different obverse and ten different reverse design candidates for the coin. The Commission of Fine Arts (CFA) and the Citizens Coinage Advisory Committee (CCAC) had both recommended the designs which were selected above. (See coverage of the CFA and CCAC review and recommendation.)

The 2013 Girl Scouts of the USA Silver Dollars were authorized under Public Law 111-86, which was enacted on October 29, 2009. The organization has more than 3,700,000 members in 236,000 troops throughout the United States and United States territories. The 90% silver coins will carry a maximum authorized mintage of 350,000 pieces and are expected to be available for purchase in early 2013. A surcharge of $10 added to the price of each coin will be distributed to the Girl Scouts of the USA to be made available for program development and delivery.