The Monetary Authority of Singapore have issued three new coins to mark the arrival of two new giant Panda bears at the Singapore Zoo.

Kai Kai and Jia Jia touched town on September 6th at Singapore International Airport among a throng of reporters and well-wishers, their arrival being captured both on live television and internet live-cam. The giant pandas from Ya’an Bifengxia Panda Base were flown to Singapore on board a Singapore Airlines Cargo Boeing 747 freighter and touched down at Changi Airport at 8.20am.

The coins are also issued to help highlight the threat of extinction faced by giant pandas today and the importance of wildlife conservation. The three coins have gone on sale with the silver edition being Singapore’s first oval-shaped coin to be minted.

Struck by the Singapore Mint, the coins, two cupro-nickel examples with a face value of two dollars and one silver five dollar coin, include color designs on the obverse of the proof quality pieces, each version sharing the same design. The obverse portrays the two pandas with elements of their natural environment of bamboo stalks and stones, their names in Chinese characters positioned on opposite sides of each panda. The reverse includes the Singaporean crest along with the text “SINGAPORE” in Hindi, English, Chinese and local dialect encircling the coat of arms. The year of issue “2012” is seen just below the crest’s shield. 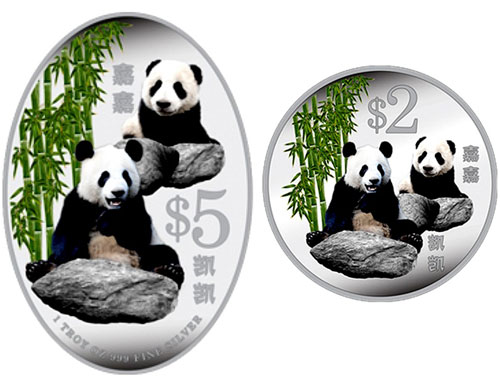 The Singapore Mint have announced that part of the proceeds of the sale of the $5 silver coin will be donated to the Giant Panda Conservation fund and that the two cupro-nickel coins are selling quickly with a three coin set selling out completely. For more information on these and other coins offered by the Mint of Singapore, please visit their website at: http://www.singaporemint.com/shop.php?c=117