Gettysburg National Military Park, located in a nexus of roads that connect ten nearby Pennsylvania and Maryland towns, was the site of one of the largest battles of the American Civil War, fought over three days in July of 1863, and left between 46,000 and 51,000 soldiers either dead or wounded. The site was honored by President Abraham Lincoln’s famous Gettysburg Address four months after the end of the battle, which, along with the Battle at Vicksburg, served as a turning point in the war. 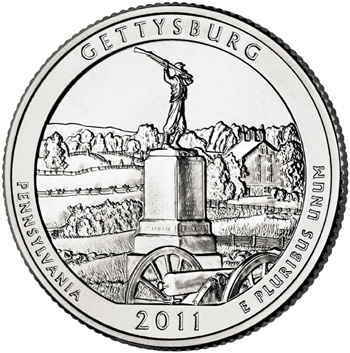 The Gettysburg National Military Park Quarter depicts the 72nd Pennsylvania Infantry Monument with a cannon in the foreground. Also included in the design are the incused phrases “Gettysburg”, “Pennsylvania”, and “E Pluribus Unum”, as well as the date of issue. The coin will represent the first issue of the United States Mint’s America the Beautiful Quarters Program for 2011, as well as being the first national park of a military nature so honored.

The Gettysburg Quarter will be available from the U.S. Mint in the following products:

These products can be found online at http://catalog.usmint.gov/

Today, January 25, 2011, the official launch ceremony for the coin was held at the Gettysburg National Military Park Museum and Visitor Center. The event was co-hosted by United States Mint Associate Director for Sales and Marketing B.B. Craig and Park Superintendent Bob Kirby.

The ceremony included appearances by Pennsylvania First Lady Susan Manbeck Corbett and the Gettysburg High School Civil War Ceremonial Brass Band. Barbara Finfrock, vice chair of the Gettysburg Foundation, served as the master of ceremonies.  Attendees were able to exchange currency for rolls of the new quarters, with children aged 18 and younger receiving a free quarter to mark the event.