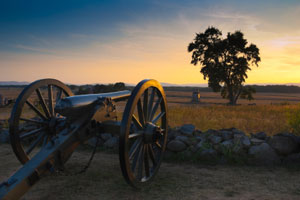 A bill has recently been proposed in the Senate, which seeks to authorize commemorative coins issued in 2013 for the Gettysburg Campaign. The coins would include $5 gold, $1 silver, and clad composition half dollars which specifically commemorate the Invasion of Pennsylvania, the Battle of Gettysburg, and the Gettysburg Address.

The bill S. 3009 The Gettysburg Campaign Act was introduced on February 11, 2010 by Arlen Specter of Pennsylvania.

The current bill is similar to H.R. 2123, which was introduced in the House on April 27, 2009 and sought a similar array of commemorative coins. However, the current bill makes some interesting adjustments to the authorized mitnages for each coin.

With regards to the design, the bill indicates that the coins “shall contain motifs that specifically commemorate the invasion of Pennsylvania, the Battle of Gettysburg, and President Lincoln’s Gettysburg Address.” The final designs would be selected by the Treasury Secretary after consultation with the Secretary of the Army, the Secretary of the Interior, The Army Heritage Center Foundation (AHCF), the Gettysburg Foundation, the Commission of Fine Arts, and review by the Citizens Coinage Advisory Committee.

The coins would be minted in uncirculated and proof qualities, with at least one US Mint facility used to strike each version. Coins may be issued during the one year period beginning January 1, 2013.

The bill S. 3009 was read twice and referred to the Committee on Banking, Housing, and Urban Affairs. To become law, the bill must be passed by the Senate and House and signed by the President.