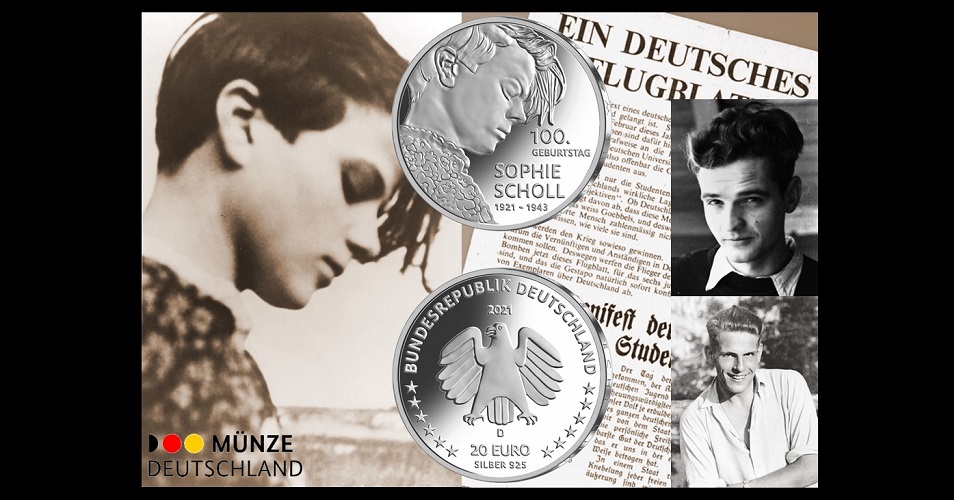 The German Ministry of Finance — Munze Deutschland has released (22nd April) silver commemorative coins marking the centenary anniversary of the birth of a noted World War II-era resistance organiser and protestor whose actions tragically ended her life just four days after she was arrested. Sophie Scholl (1921–1943), her brother Hans Scholl (1918–1943), and Alexander Schmorell (1917–1943) were taken into custody in February 1943 for leafleting their university with anti-Nazi literature, which was part of the activities organised by the White Rose. The group was a non-violent, intellectual resistance entity in Nazi Germany, which emerged in response to the harsh, discriminatory edicts put in place by the regime of Hitler.

The memorial coins are minted by the Bayerische Hauptmünzamt — Bavarian State Mint, at their facilities in Munich, and are designed by Olaf Stoy from Rabenau, Saxony. The obverse side of the coins includes a recreation of a familiar photograph of Sophie Scholl, believed to have been taken when she was about 18 years old. The text 100 GEBURSTDAG SOPHIE SCHOLL 1921 – 1943 is arranged in five lines and placed to the right of Sophie’s image.

The reverse side includes a stylised eagle centred with the mintmark D (Munich) placed below the eagle. The denomination of 20 EURO and the coins’ fineness of SILBER 925 are also seen underneath the eagle. The year of issue and the issuer BUNDESREPUBLIK DEUTSCHLAND are placed above the eagle. A series of six five-pointed stars totalling 12 — representing the European Union — are also arranged on both sides surrounding the primary design. Each coin includes an incused edge inscription which reads EIN GEFUEHL WAS RECHT UND UNRECHT IST (“A feeling of what is right and wrong”). The quote is taken from a letter written by Sophie to her friend Fritz Hartnagel on the 16th May 1940, in which she declared, “I don’t know a lot about politics nor the ambition to do it, but I do have a little sense of what is right and what is wrong.”

The Prooflike pieces are available for their face value at leading commercial banks and post office counters. The Proof-quality collector’s edition is available by visiting the website of Munze Deutschland.

*Towards the end of the year, the entire €20 Proof-quality coin collection consisting of five 2021-dated pieces and including the Sophie Scholl memorial coin will be available in a set and presented in an official blister-pak type folder. 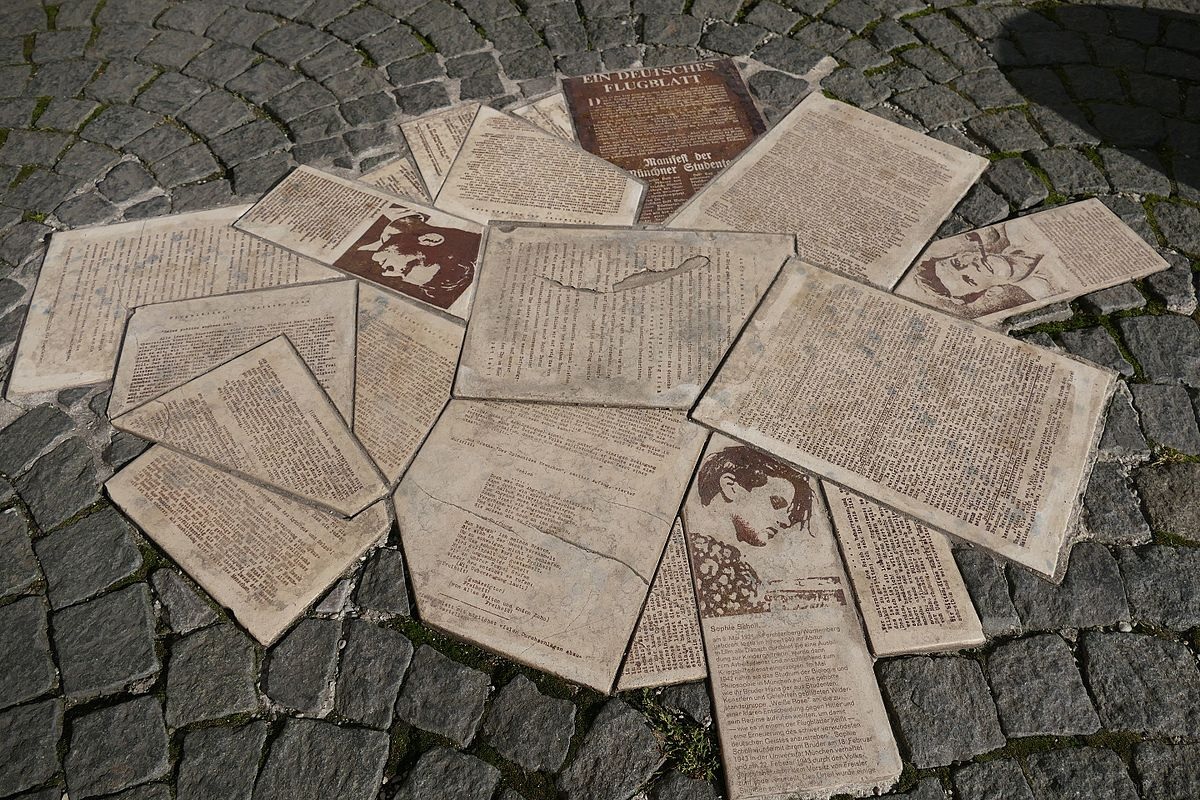 Led by a group of students from the University of Munich, including Sophie, Hans, and Alexander, the anti-Nazi resistance group White Rose was dedicated to speaking up against the repressive, harsh policies of National Socialism. The group conducted anonymous leaflet and graffiti campaigns that called for active opposition to the Nazi regime. Their activities started in Munich on the 27th June 1942, and ended with the arrest of the core group members on the 18th February 1943.

Their last act of defiance was carried out on this day when Hans and Sophie distributed leaflets at Ludwig Maximilian University where Sophie dropped the last remaining leaflets the group had printed from a top floor down into the atrium. This spontaneous action was observed by the university’s maintenance man, Jakob Schmid, who reported the offence to the authorities, resulting in the arrest of the Scholls, who were both taken into Gestapo custody.

From the start of the show trial, Sophie fearlessly interrupted the notorious Judge Roland Freisler multiple times despite the fact that none of the defendants was given an opportunity to speak on their own behalf. During the proceedings in the so-called “People’s Court” on the 21st February 1943, Scholl was recorded as saying:

Somebody, after all, had to make a start. What we wrote and said is also believed by many others. They just do not dare express themselves as we did.

Predictably, on the 22nd February 1943, Sophie, her brother Hans, and their friend Christoph Probst (1919–1943), who was also their co-defendant, were all found guilty, condemned to death and executed by guillotine. Scholl and her brother’s defiance in the face of terrifying consequences soon gained enormous admiration. Their arbitrary sentence was carried out by executioner Johann Reichhart in Munich’s Stadelheim Prison. Brother and sister were given the chance to say their last goodbyes to their distraught parents in the prison they were held in before their sentence was carried out. Sophie’s execution was supervised by Dr. Walter Roemer, who was the enforcement chief of the Munich district court. Prison officials took note of the bravery with which she walked to her execution. Her last words were recorded as Die Sonne scheint noch (“The Sun still shines”). After her execution, Sophie was buried in the Perlacher Friedhof cemetery in Munich alongside her brother Hans.

Judge Roland Freisler would meet with his own fate nearly two years later on the morning of the 3rd February 1945 when the People’s Court and Berlin was bombed by the United States Air Force. The raid was led by a B-17 commanded by Lt. Colonel Robert Rosenthal (1917–2007) who also served as an assistant to the U.S. prosecutor at the Nuremberg trials. Over the years and in the aftermath of the war, the legacy of the White Rose has been considered significant by many historians. Only in 1998, were laws passed by the Bundestag abolishing Nazi judgments of prejudice in the administration of criminal justice. As such, the sentences against Sophie and Hans Scholl and other members of the White Rose were finally declared null and void in Germany.

In 1990, the Sophie Scholl memorial designed by artist Robert Schmidt-Matt was unveiled and located in front of the Ludwig-Maximillian University building on Ludwigstrasse in Munich. Designed to appear as paper leaflets scattered on the ground in front of the university building, in actuality, they are cement plates attached permanently to the ground in front of the main entrance on Geschwister Scholl Platz, meaning “Scholl siblings’ plaza.” The story of Sophie Scholl’s life was the subject of a full-length motion picture released in 2005 entitled Sophie Scholl — The Final Days, which was based on the actual interrogation transcripts from historical archives and interviews from eyewitnesses of the day. The film was nominated for an Academy Award for Best Foreign Language Film.