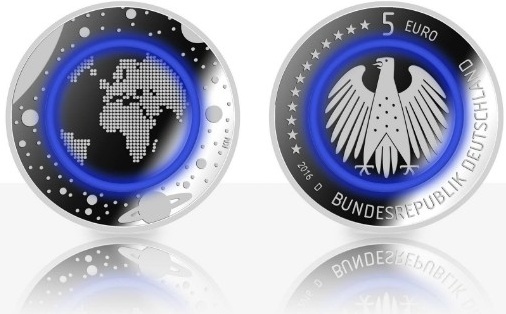 The Ministerium für Finanzen und Wirtschaft Baden-Württemberg (Ministry of Finance and Economics Baden-Württemberg) has publicized the issue of Germany’s upcoming 5 euro coin, which is being hailed as both a numismatic first and a new step toward a “next-generation” coin that is resistant to counterfeiting.

As part of the production and design, a ring of colored transparent—and in this case, blue—polymer separates the coin’s outer ring and centre disk, both made of cupro-nickel. The developers behind this concept are celebrating this achievement as the “innovation of an era,” since the security element of this coin will significantly lessen the ability of counterfeiters to replicate it without difficulty or immense cost. The developers hope this design will eventually be integrated into circulation coinage for this denomination.

The coin’s design is comprised of a ring of polymer which is enclosed by another ring of metal. The transparent blue ring is made of a material that can be worked like metal but is actually plastic. It contains both a color pigment and security features. The joint between the polymer plastic and metal is just as strong as between the two different metals in conventional bi-metallic coins, such as the one- and two-euro coins.

The coin’s obverse includes a depiction of the earth surrounded by the blue transparent polymer ring; illustrations of the other eight planets in our solar system are found along its outer edge. Blue was chosen to symbolize the earth’s atmosphere, though any color could be injected into the plastic.

As is usual for most German coins, the reverse features an image of an eagle in stylized fashion, along with the year of issue and 12 stars representing the 12 original members of the European Union.

The coin’s development at the Bavarian Mint and the Leibniz Institute of RWTH Aachen University took nearly ten years to complete. Designers hope that, if adopted by the European Central Bank, the coin will eventually replace the present 5 euro banknote denomination, which is commonly found in poor quality due to frequent use; some Central Banks within the Eurosystem have suggested this note should be replaced with a coin in the near future.

The coin is scheduled to make its debut at the World Money Fair in February of 2016 before being released into circulation in Germany in the spring. The coin will not be legal tender anywhere else except in the Federal Republic of Germany. The five state mints of Germany—Berlin, Hamburg, Karlsruhe, Munich, and Stuttgart—will begin minting soon after the dies are produced, a process that is currently underway.