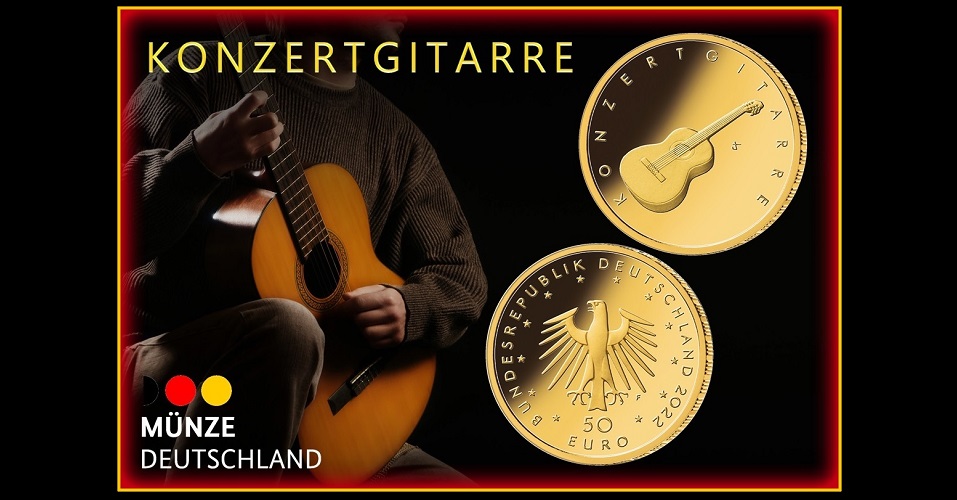 The German Federal Republic’s Ministry of Finance, along with Munze Deutschland, have unveiled the design for the last €50 gold coin which is part of the “Musical Instruments” series. Originally launched in 2018, the five-coin series focuses on concert instruments such as the horn, piano, violin, bass drum, and finally, concert guitar.

The creation of musical instruments has held a prominent place in German cultural history since the Middle Ages. These instruments have remained in demand worldwide due to their high quality. Acoustic wood instruments, especially the guitar and its predecessors from which it developed, is probably one of the most popular and most recognised instruments in the world. The first lute instruments from which the guitar was developed have been known in the East for 5,000 years. Egyptian drawings from the time of the pharaohs show women playing lute-like instruments. The Arabic lute made its way to Europe via North Africa and Spain in the eighth century A.D. and the term guitarra first appeared in the 13th century.

The Spanish guitar builder Antonio Torres (1817–1892) is considered the father of modern concert guitar production, and his instruments correspond in shape and construction to today’s guitars. Among some of his improvements, he enlarged the body and used thinner wood than was usual at the time. He also improved the sound by developing a fan system that strengthens the guitar top and spreads the vibrations over the entire surface. In Germany, this type of construction was primarily taken up and disseminated by Hermann Hauser Senior (1882–1952). This fact is honoured by the conclusion of the five-part series “Musical Instruments,” which is marked with the Concert Guitar coin.

The obverse side of the 50-euro gold coin is designed by the artist Jordi Truxa from Berlin. His design emphasises both the fascination and unique look of the concert guitar through the representation of perspective. The instrument appears particularly three-dimensional; the diagonal playing position reflects the usual playing stance. Above and around the primary design is the text KONZERTGITARRE, with the artist’s stylised initials just below the guitar’s neck. The reverse side is created by the artist Erich Ott of Munich whose design depicts a stylised eagle centred with corresponding lettering which reads BUNDESREPUBLIK DEUTSCHLAND 2022 placed above and around the eagle. The coins’ denomination of 50 EURO and the mintmark Berlin (A), Munich (D), Stuttgart (F), Karlsruhe (G), or Hamburg (J) placed below the eagle. Also incorporated into the design are 12 stars which surround the eagle, representing the European Union.

Officially issued on the 8th August 2022, Munze Deutschland reminds collectors that the order deadline for placing reservations for this coin is from the 4th April to the 16th May 2022. Each coin is encapsulated and presented in a custom case accompanied by a certificate of authenticity. For additional information, please click here.