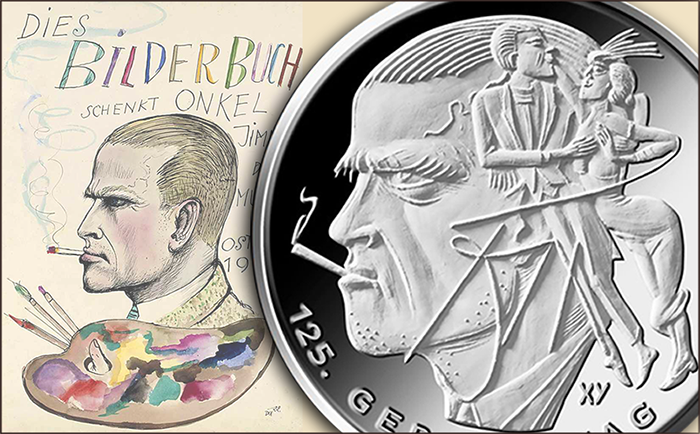 The Official Sales Agency for Collector Coins (Verkaufsstelle für Sammlermünzen) of the Federal Republic of Germany have announced the issue of a new €20 silver coin celebrating the 125th anniversary of the birth of noted artist Otto Dix (1891–1969). Dix is recognized as a leading contributor in art, dedicated to the style of Neue Sachlichkeit or “The New Objectivity.” This era was a movement in German art that arose during the 1920s as a reaction against Expressionism, which in itself began before the First World War and reached a peak in Berlin during the 1920s. These works today, including Dix’s depictions of the Weimar era, offer a very vivid recollection and recording of one of the more tumultuous chapters in the country’s past. 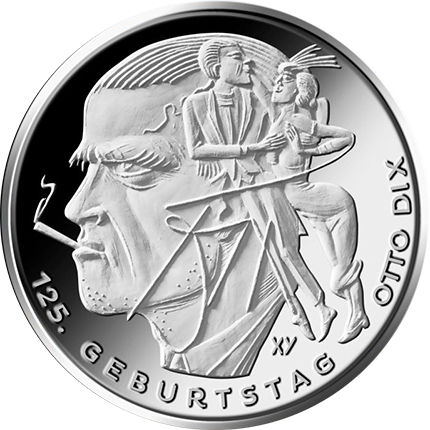 The obverse design of the coin, issued by the Federal Ministry of Finance, includes a virtuoso self-portrait of Dix arranged as a collage with his famous print Modern Dancers in the foreground. Also included are a pictorial quotation of the main motif of Dix’s work and his signature, which is superimposed over the main portrait. The surrounding legend around the lower part of the coin reads 125. GEBURTSTAG OTTO DIX (“125th Birthday of Otto Dix”). 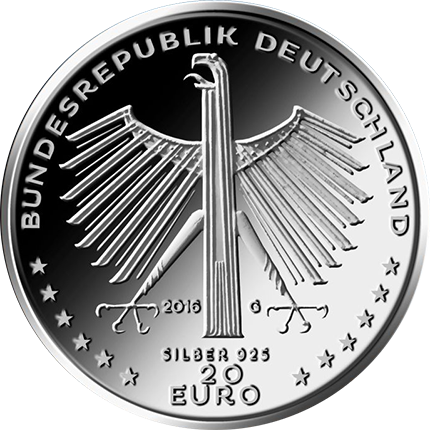 The reverse shows a stylized eagle; around the principle design is the text BUNDESREPUBLIK DEUTSCHLAND (“Federal Republic of Germany”). The mintmark G of the State Mint of Baden-Württemberg is placed to the lower right claw of the Eagle and the year 2016 is seen toward the left claw. Six stars are included on either side of the eagle, totaling 12, representative of the European Union. The fineness of the coin SILBER 925 is imprinted just above the coin’s denomination, of 20 / EURO. The smooth edge of the coin is incused with the inscription DU MUSST ALLES SELBER SEIN! (“You must all be yourself!”) 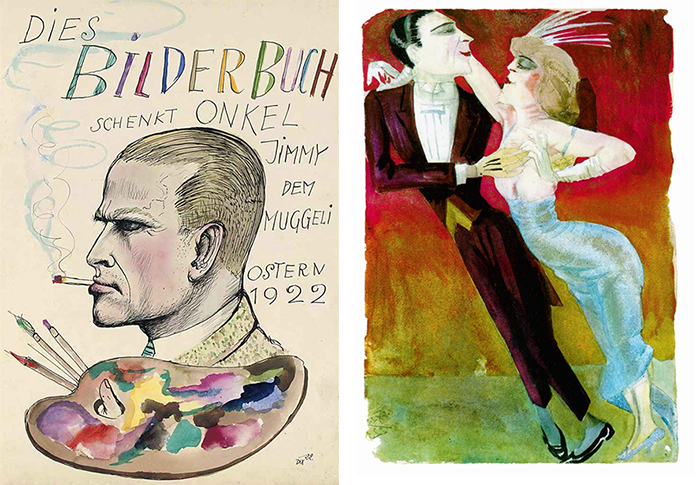 At left is the Dix self-portrait type in the coin’s background. The artist represented himself in similar, left-facing profiles, complete with bulging vein, scowl, and cigarette, in multiple pieces. This one is a drawing for picturebook that he gave to “Muggeli,” perhaps a young relative. At right is the Modern Dancers print; the original depicts the dancers moving to the right, but the coin’s designer found it more effective to reverse their direction, as shown here. (Wikipedia photos)

This is the Federal Ministry’s last silver €20 collector issue for 2016. The coins are sold separately for their face value in circulation quality, and in sets struck in both Brilliant Uncirculated and Proof quality; these include all five €20 collector coins issued this year. For additional information on this and other coins offered by the VfS, please visit their website (in German). International sales dispatched where applicable.  ❑
Share: