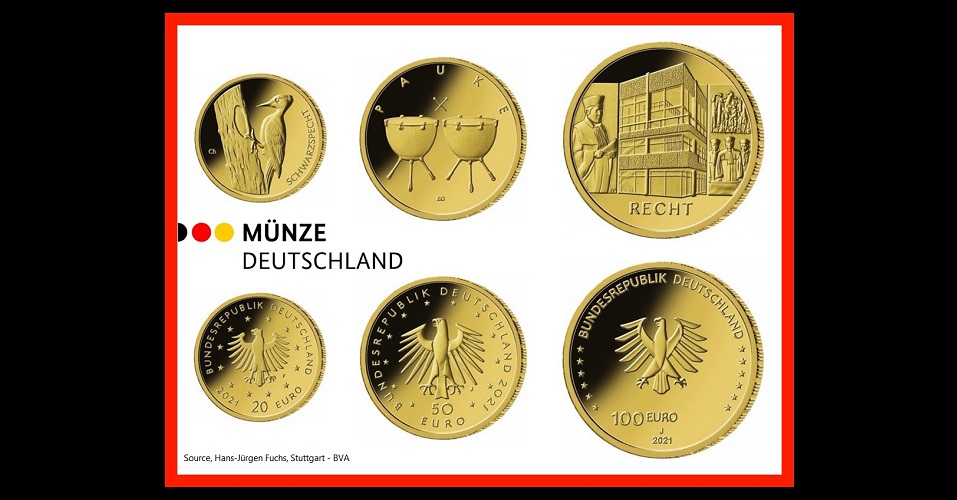 The German Ministry of Finance and Munze Deutschland are reminding collectors the deadline to place an order for the 2021-dated gold Brilliant Uncirculated coins in their current series for €20, €50, and €100 programmes is fast approaching. Ordering commenced on the 8th April and will close on the 17th May. Thereafter, dispatch for the coins of various denominations will take place later in the year from June and up to October. Each of the three denominations is part of an ongoing coin series which follows:

The 2021-dated gold coin of €20, which is part of a six-coin series entitled “Domestic Birds,” concludes by featuring the black woodpecker. As many bird-watchers can attest to, one hears the woodpecker first, before spotting him. He is, in a sense, one of the bird world’s best architects and builders. Utilising its hard beak, the male woodpecker essentially pecks out small caverns inside the trunks of trees in order for the female to build a nest for their young. With a wingspan of just under 70 centimetres, black woodpeckers are not only the largest woodpeckers in Europe, but also an adept aviator who can easily cover long distances over water. Its vast habitat extends across large parts of Europe to Asia, throughout the British Isles and Iceland, around large parts of Central and Eastern Europe and up over the taiga belt to Hokkaido in Japan. Black woodpeckers are so-called largely due to their pitch-black plumage and a coral-coloured crest.

The obverse side is designed by František Chochola of Hamburg, who depicts a typical black woodpecker clinging onto the trunk of a tree, his sharp beak making the first dents in what will ultimately become a hollow for nest-building. The text SCHWARZSPECHT (“BLACK WOODPECKER”) is placed to the right of the primary design and along the edge. The design on the reverse side is the work of artist Adelheid Fuss of Potsdam. The design includes a stylised depiction of an eagle, a national symbol of the Federal Republic of Germany. The issuing country BUNDESREPUBLIK DEUTSCHLAND is placed over the primary motif with the denomination of 20 EURO and year of release, 2021, shown below the eagle. The eagle is surrounded by 12 stars, representative of the European Union.

Featured on the latest coin in the “Musical Instruments” series, which concludes next year, is the timpani — one of the oldest musical instruments, and an integral part of every symphony orchestra. The word “timpani is an Italian plural, the singular of which is timpano. However, timpani are often paired and typically refer to the kettle drums — those deep, solemn, loud, and triumphant tones that one often hears towards the end of many inspirational and emotional works of classical music. Timpani are impressive in their appearance as large percussion instruments consisting of a kettle, mostly made of copper or polished brass, over which a skin is tightly stretched. It is played with mallets of which their head, depending on the desired pitch, is covered with soft felt and made of cork or wood.

The motif on the obverse side is the work of artist Elena Gerber of Berlin, who has depicted the Timpani as two drums side by side on a clear field. The crossed mallets are seen in between and just over the two drums. The text PAUKE (“DRUMS”) is placed over the motif and along the edge. The reverse side is designed by Erich Ott of Munich, his stylised depiction of an eagle, the national symbol of the Federal Republic of Germany is centred. The issuing country BUNDESREPUBLIK DEUTSCHLAND 2021 is placed over and around the primary motif. The denomination of 50 EURO is shown below the eagle which is surrounded by 12 stars, representative of the European Union.

EINIGKEIT UND RECHT UND FREIHEIT — these words translate to “UNITY AND JUSTICE AND FREEDOM” and are also the first words of the German national anthem. The second gold coin in the “Pillars of Democracy” series, which launched in October 2020, features the rule of law as its subject. Written law is the groundwork for any democracy, which places great importance and emphasis on the rule of written constitutional law as the basis of justice and equality under the law guaranteed to every German citizen.

The obverse side is designed by the artist Bastian Prillwitz of Berlin, whose design focuses on the building of arguably the most important legal entity of the Federal Republic of Germany, that being the distinctive Federal Constitutional Court in Karlsruhe. Also included are representations of the unmistakable High Court judges dressed in their traditional or characteristic red robes. Below the primary design is the word RECHT (“LAW”), which completes the artist’s work. The reverse side is designed by Andre Witting of Berlin, who depicts a stylised version of an eagle, the national symbol of the Federal Republic of Germany. The issuing country BUNDESREPUBLIK DEUTSCHLAND is placed over the primary motif. The denomination of 100 EURO is off-centred towards the left and placed below the eagle. The year of release, 2021, is centred and seen below the denomination. The eagle is flanked on each side with six stars, 12 in total, and representative of the European Union.

Each 20 and 50-euro gold coin is encapsulated and dispatched with a certificate of authenticity. The 100-euro coins are encapsulated and presented in a black case embossed with the national crest and accompanied by a certificate of authenticity. Mintage numbers will be posted later in the year. For additional information and ordering instructions, please visit the website of Munze Deutschland. Information is available only in German.