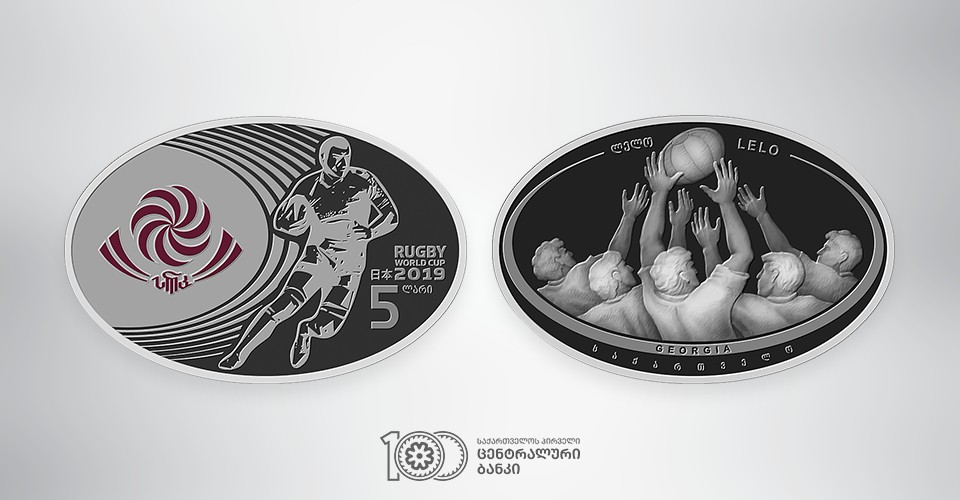 Image courtesy of the National Bank of Georgia. Hover to zoom.

The National Bank of Georgia has announced (28th August) the issue of gold and silver Proof collector coins which highlight Georgia’s National Rugby League, the Georgian Lelos, which is competing in the Rugby World Cup in Japan from the 20th September to the 2nd November.

The governor of the National Bank of Georgia, Koba Gvenetadze, participated in the launch of the new collector coins. The presentation was also attended by the Georgian National Rugby Team, Georgian Rugby Union representatives, members of the legislative and executive body of Georgia, representatives of the financial sector, international organisations, and diplomatic corps.

The popularity of rugby in Georgia could be explained by its resemblance to the traditional Georgian game named ”lelo,” or “lelo burti,” which translates to “field ball.” Several unsuccessful attempts to introduce a rugby union into Georgia were made, with the earliest known instances being in 1928. Additional subsequent efforts were also undertaken in 1940 and 1948 and did take root by the late 1950s. The first Georgia Rugby Union was founded in 1964 while the country was part of the now-defunct USSR and their federation. Under this arrangement, Georgia initially did not have its own team, and its best players would play for the USSR team.

By 1988, and with the winds of change acutely visible not only in Georgia but in all parts of the soon-to-be-former USSR, Georgia produced their first national sevens side. With Georgian independence being unilaterally declared on the 9th April 1991 from the USSR, it would be the turn of the national rugby team to organise themselves away from the former USSR team and gain international recognition. The team continued to play matches under the name Commonwealth of Independent States, where the national team was limited to other CIS member states but they would ultimately gain membership of World Rugby, the international governing federation, in 1992. The team’s nickname, The Lelos, comes from lelo burti, the traditional Georgian sport with strong similarities to rugby. Lelo has been adopted as the Georgian word for “try,” which is the highest-valued score in rugby. The name has also given rise to the popular standard cheer of the Georgian rugby union as Lelo, Lelo, Sakartvelo (“Try, Try, Georgia”). 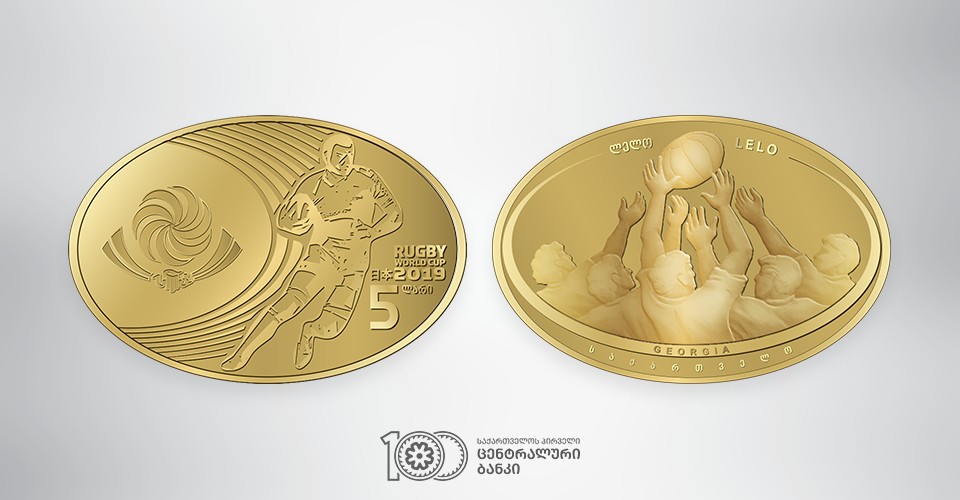 Image courtesy of the National Bank of Georgia.

The Mint of Lithuania produces the oval-shaped gold and silver Proof coins at their facilities in Vilnius, on behalf of the National Bank of Georgia, and are designed by Mamuka Gongadze and Nitta Gongadze. The designs are shared on both the gold and silver examples, with the silver versions having an additional colour application of the team’s logo. The obverse side of the coin represents a rugby player with a ball and Borjghali, which is the logo of the Georgian National Rugby Union. It reads RUGBY WORLD CUP in Japanese and English, along with 2019 and 5 Lari (shown in the Georgian alphabet). The reverse side depicts the beginnings of lelo burti, the ancient traditional Georgian game, with a ball thrown in the air and hands striving to catch it. On top, it reads Lelo, and on the bottom, Georgia, both in English and Georgian.

The coins have been available at the cash centre of the National Bank of Georgia in Tbilisi since the 29th August, from the Money Museum in the city of Kvareli, and online. Each coin is encapsulated accordingly to accommodate its oval shape and is presented in a custom presentation case along with a certificate of authenticity. For additional information, please click here.

Georgia: New collector’s coin issued in celebration of the centenary anniversary of the National Bank