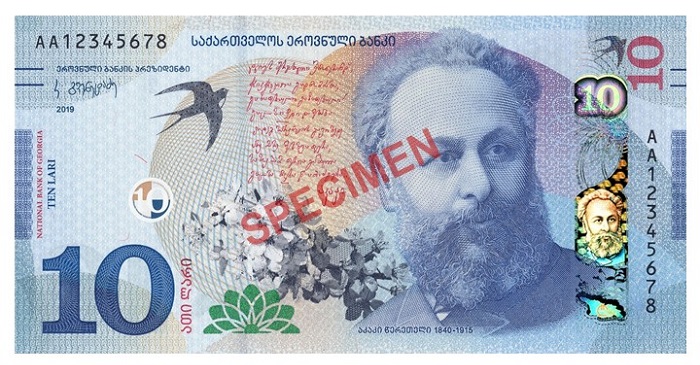 The National Bank of Georgia has released their 10-lari banknote denomination (GEL 10 = $U.S. 3.40) which is the last to be issued as part of a newly re-designed series of banknotes first introduced in 2016. The new 10-lari note follows from the first note — the 20-lari denomination released in February 2016, followed by both the 50 and 100-lari notes in November 2016. The five-lari banknotes were released in September 2017. 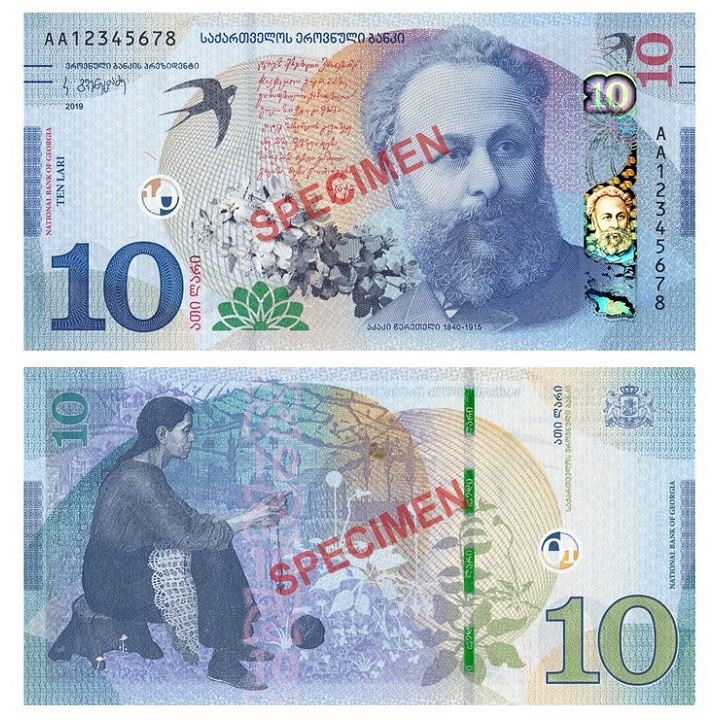 Featured on the face side of the banknote is a portrait of the great Georgian writer and public figure Akaki Tsereteli (1840–1915). Born on the 9th June 1840, to a prominent Georgian aristocratic family, he is best remembered in the country for his activities in support against the Czarist regime and who campaigned for a cultural revival and self-determination of the Georgians. As the author of hundreds of patriotic, historical, lyrical, and satirical poems, as well as humoristic stories and an autobiographical novel, Tsereteli was also active in educational, journalistic, and theatrical activities. Also included in the design is an excerpt from Tsereteli’s famous poem Spring, along with his autograph. Also included on the face side as part of highlighting Georgia’s flora and fauna is a budding branch of flowers and a swallow flying overhead.

Featured on the back is an image of the painting entitled Imereti — My Mother, which was painted by eminent Georgian artist David Kakabadze (1889–1952), who is remembered as having been one of Georgia’s leading avant-garde painters during his life.

The 10-lari banknote is dated 2019 and measures 127 by 64 millimetres with a predominantly blue colour and coordinating underprints. The signature of the president of the National Bank of Georgia, the year of release, 2019, and two placements of serial numbers (in both vertical and horizontal directions) consisting of two Latin letters and eight western numerals is included on the fae of the notes. Updated security features include:

Holographic application: Placed to the right of Tsereteli’s portrait is a hologram vertically designed and includes images of his own portrait, the denomination in numerals, the currency symbol of the lari, a swallow, a map of Georgia, and micro-text.

Watermark: Situated to the left-field is a watermark that depicts Tsereteli’s portrait, the denomination in numerals, and the currency symbol of the lari. This is all visible when holding the banknote against transparent light.

Vertical security thread: The security thread with see-thru clear-text 10 ლარი appears windowed or segmented on the back and is visible as a continuous stripe against transparent light. The thread also shifts in colour from green to azure when tilted.

Latent image application: The denomination numeral, which is situated within the left collar of the jacket worn by Tsereteli, is visible when the banknote is tilted.

Iridescent stripe: Placed on the back, a vertical iridescent transparent stripe containing the numerical denomination and stylised flower petals is visible on the surface of the banknote when tilted under ordinary light.

For additional information about the coins and banknotes currently in use within the Republic of Georgia, please visit their website and for an interactive display, click here.