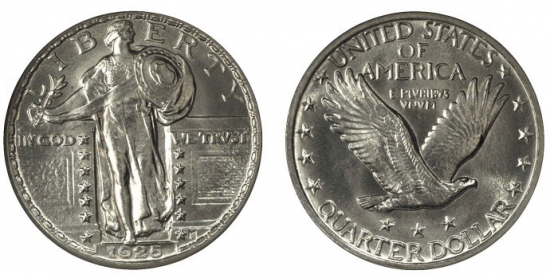 One of the most difficult designs to grade are Standing Liberty Quarters. First of all, there is a lot going on in the obverse design, but not so much in the reverse. As you might anticipate, it is the obverse with its dozen-odd devices (mottoes, branch, robe, date, borders, stars, Liberty, Union shield within a shield, etc.) that we need to focus on, especially if you intend to buy raw coins from online venues like eBay or Proxibid.

Very few raw Standing Liberty Quarters earn the “full head” designation, which can bring a tidy premium. For example, a 1926-D MS 63 without the FH designation is worth about $200 or so; with the designation in the same grade, the value jumps to $3,500.

The designation FH, for “full head,” focuses on the major wear point of the series, which has two types (or three if you count the recessed date of 1925-30 issues). Type I features a bare-breasted Liberty (1916-17) and Type II features her in armor with a different hair style.

(Note: Coin lore about Hermon A. MacNeil’s design concerns the bare breast in 1916 and 1917 Type I issues; that was changed in 1917 Type II issues so that Liberty ends up wearing chain mail. Was the design changed because of public outcry about nudity … or was it changed to armor because of the impending First World War …  or both? We’ll save that discussion for another day.)

It also should be noted that the reverses were changed in 1917 Type II coins, with the eagle more centered and with three of thirteen stars underneath.

Each major grading service has different ways to discern whether the coin has a full head. PCGS, for instance, states:

NGC uses the American Numismatic Association’s grading guide: “All details in hair are well defined; hair line along face is raised and complete; eyebrow is visible; cheek is rounded.”

Let’s simplify this so that you don’t tear your own hair out trying to discern whether Lady Liberty’s hair is well defined.

First, a word of caution: Sellers of raw coins on eBay, Proxibid and other portals often claim their  Standing Liberty Quarters have full heads so as to get as much money as possible for the lots in question. I spent an hour researching descriptions on eBay for lots purported to be “full head”; I only agreed with one out of more than two dozen.

The key to a full head is a distinct outline of the hair by the forehead, which typically is flat in poorly struck coins.

Here is an example of the one full head I agreed with from an eBay seller: 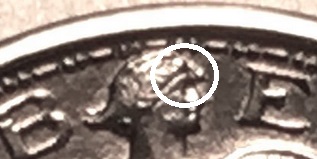 The forehead is not flat, and the hairline and bands of this 1917-D Type I sample are well defined.

I don’t believe that the coin below is full head as another eBay seller claims, but it does come close: 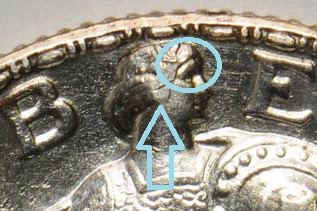 The hairline on the forehead is there (light blue circle above) but the hair is ill-defined (light blue arrow) and so probably won’t make the grade at PCGS or NGC (note different hairstyle from Type I above, with the hair sweeping down behind her neck toward her shoulder).

Here is a typical mis-graded Standing Liberty coin on eBay purporting to be full head: 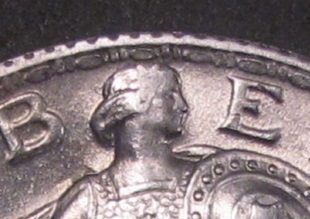 As you can see from the photo above, hair and forehead flatten and combine.

Another point on the obverse to check in verifying a well-struck coin are the rivets on Lady Liberty’s shield. The rivets on the left side of the photo below show flatness in one section, indicating a poor strike; the one on the right shows each rivet.

Combined with a full head, such a coin can bring a very high premium, assuming it has not been cleaned or otherwise damaged.

For a more detailed understanding of what constitutes full head, see this excellent summary by Mike Sherman on the PCGS site, titled “Tips from the Grading Room.”