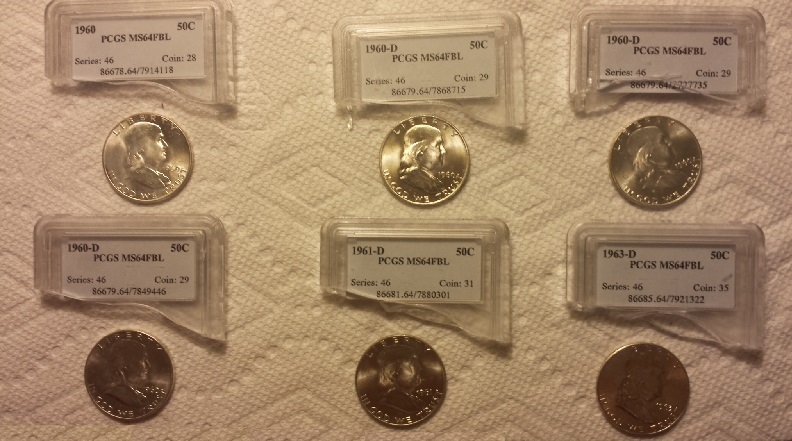 Recently in a Proxibid auction I saw an opportunity to score big by winning six Franklin half dollars in older holders, circa 1999, graded MS-64 full bell lines.

The abbreviated designation, “FBL,” refers to the reverse of a Franklin half dollar on which the two lines on the bottom of the bell run unbroken to the crack.

Total cost for the six, including buyer’s premium, was $321. (Obviously others on Proxibid had the same idea as me.) Retail for the six coins was $275. However, if one coin graded a point higher at MS-65 FBL, there was profit to be made. Below contrasts the retail worth at MS-65 FBL vs. MS-64 FBL:

I just got back the disappointing results:

As you can see, PCGS graded the obverse fairly consistently, with only one going up a full grade. However, all lost the FBL designation. Ouch.

There’s much to learn in this exercise, so I don’t mind spending the $180 for slabbing fees and losing $72 on the original investment, representing a total loss of $252.

I cannot document that the Economy-level graders missed the full bell lines intentionally because they were wary about awarding the FBL designation and dramatically increasing worth. Typically, a disappointed hobbyist might feel that (as I did); however, that is beside the point.

Originally, I cracked out the coins to test the consistency of PCGS grading from an older ear (allegedly more rigorous). I never believed that about rattlers, old green holders, and older pale blue holders. You can read regularly in numismatic publications how grading standards are inflated now as opposed to yesteryear. I have tested that theory repeatedly in Coin Update News (see this post or this one as examples). My conclusion over time is two-fold: (a) any over-graded older PCGS holders already have been cracked out and re-slabbed or (b) PCGS in its early days was, well, inconsistent.

This experiment also makes a case for re-submitting older holders for reconsideration rather than cracking them out. (I did a post earlier this year on that, too: click here). I probably would have retained the FBL in the 1961-D upgrade and recouped my investment.

The point here is if a coin has earned a premium designation, such as FBL or DMPL (deep mirror proof-like), you probably should go with reconsideration rather than crack-out resubmissions.

Finally, remember that I am a reporter as well as numismatist and Coin Update is one of the few hobbyist sites that test grading standards regularly. Other posts are forthcoming here, always with the intent to serve you so that you can devise the best strategies for your collecting or investment goals.