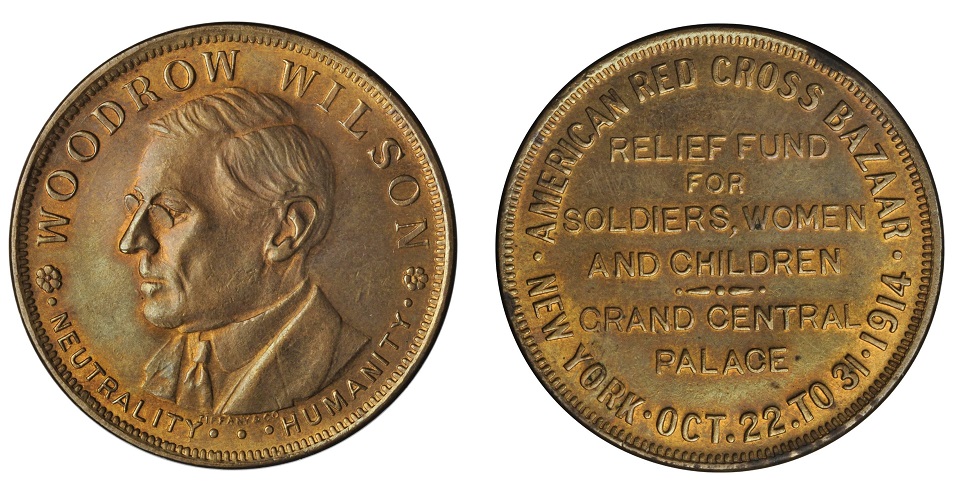 Numismatists are familiar with the rich history of tokens and medals related to the Red Cross. They include small, modest American issues like a brass relief-fund token made during the First World War. There are larger pieces, too, like the impressive 1920 War Council medal designed by Daniel Chester French and co-sponsored by the American Numismatic Society.

Other nations have issued commemorative and fundraising medals to celebrate and support the mission of international Red Cross organizations. Germany, Italy, Japan, Russia, Britain, and France are among more than 100 countries that have their own versions of the Red Cross. 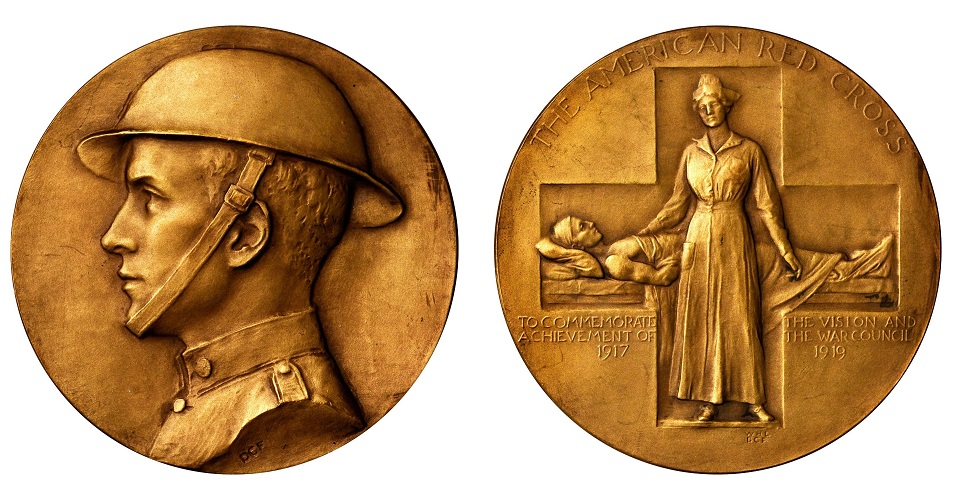 Only 205 examples of this large bronze medal were struck by Medallic Art Co. Designed by American artist Daniel Chester French, it shows the uniformed bust of a helmeted doughboy, and a nurse with a wounded soldier. It measures 69.9 millimeters (about 2-3/4 inches across). (Courtesy of Stack’s Bowers Galleries).

Here in the United States, the American Red Cross, founded in 1881, is a nonprofit organization that supplies about 40 percent of the nation’s blood; teaches lifesaving skills; distributes international humanitarian aid; and supports veterans, military service members, and their families. 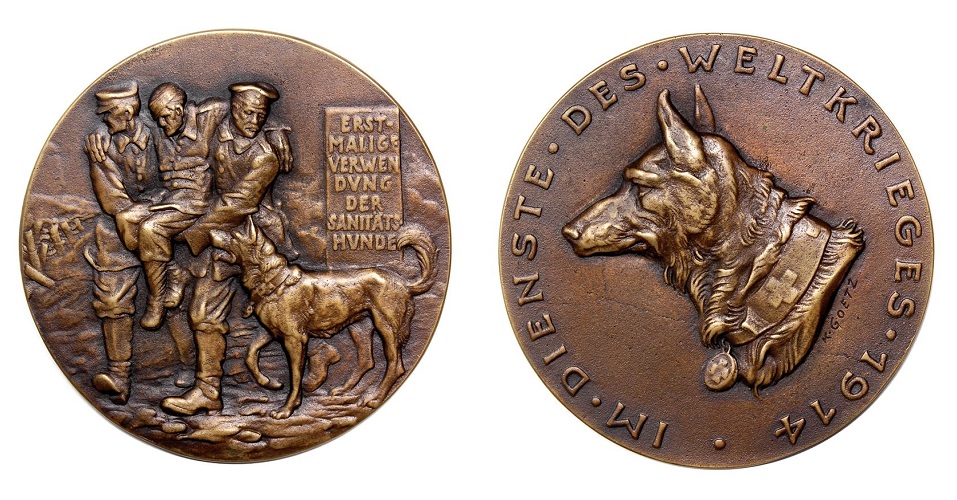 Germany’s first use of Red Cross rescue dogs in the Great War was captured in a large bronze piece by the famed medalist Karl Goetz. Cast bronze, 105 millimeters (Courtesy of Stack’s Bowers Galleries).

Another important goal of the Red Cross is to shelter, feed, and provide comfort and relief to victims of disasters like the recent tornadoes that ripped through Kentucky, Arkansas, Illinois, Indiana, Missouri, and Tennessee. 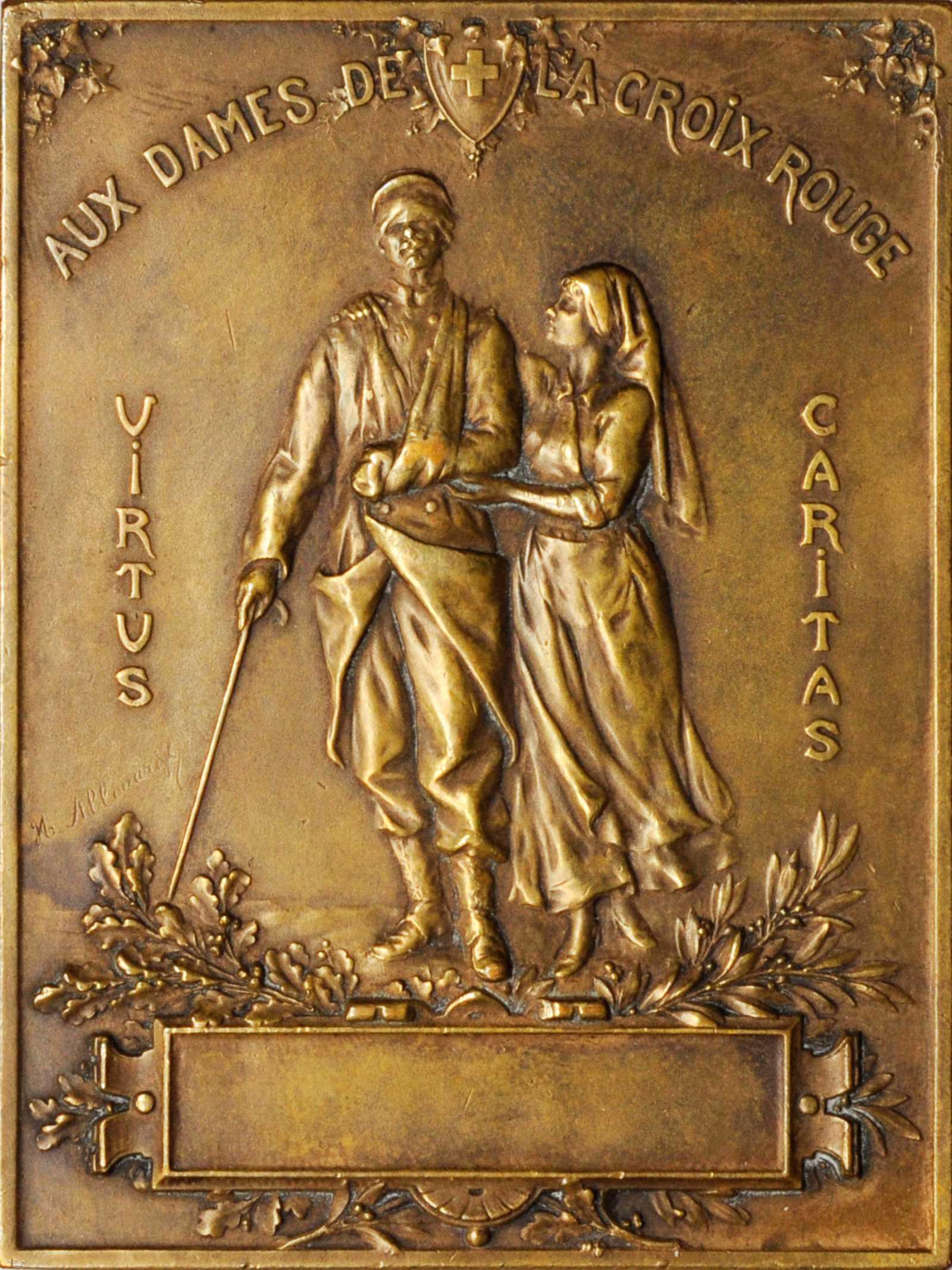 This circa-1920 French “Women of the Red Cross” medal was made to celebrate and thank nurses who risked their lives to help others. (Courtesy of Stack’s Bowers Galleries).

“Our thoughts are with everyone whose lives were changed forever by the horrific and deadly tornadoes that touched down overnight across the center of the country,” the American Red Cross announced on December 11. The nonprofit and its partners are working around the clock across Kentucky and other states to help those in need. 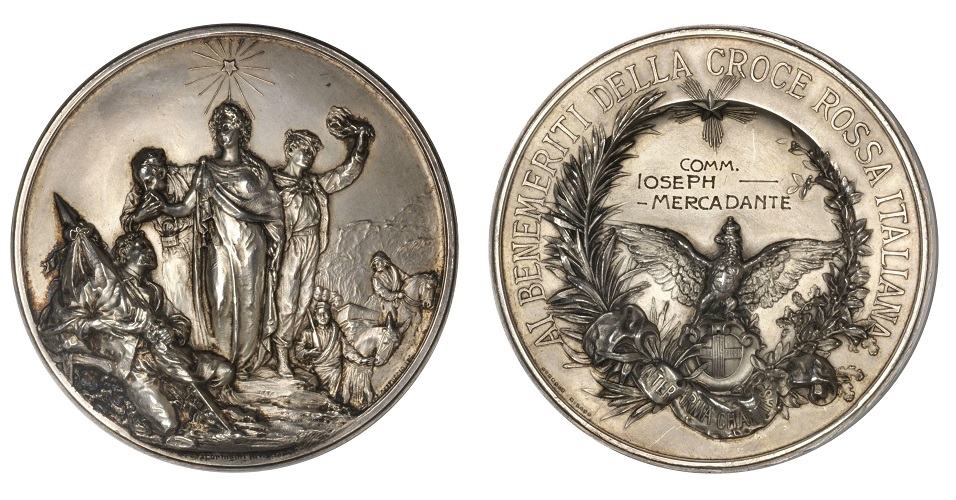 You might not get a medal for assisting the Red Cross, but you deserve one.

The organization depends on volunteers and the generosity of Americans nationwide to deliver its mission. You can help the Red Cross help those in need—including in Kentucky—by donating blood or money, or by volunteering. To learn how, please visit redcross.org or cruzrojaamericana.org.

From the Colonel’s Desk: How much for a refreshing mug of beer in Louisville?

From the Colonel’s Desk: Bronze tokens and Christmas cheer in a Kentucky coal town