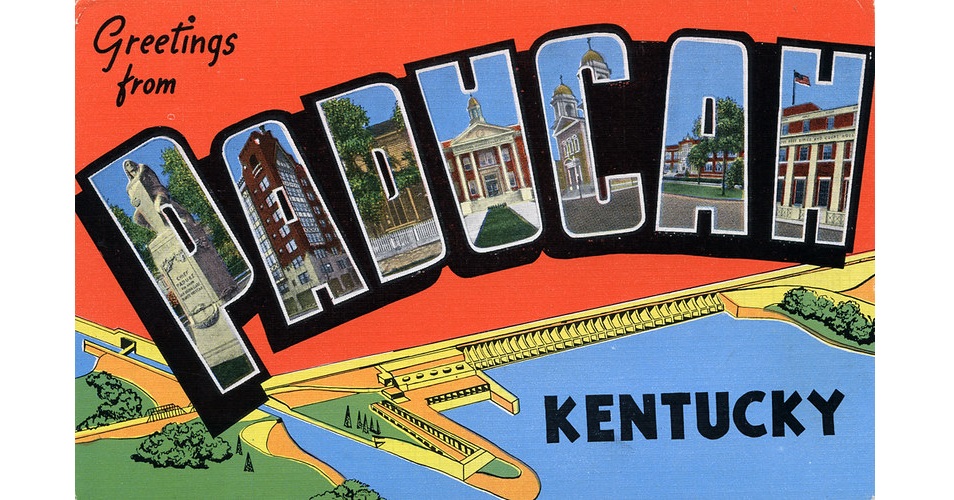 From the early 1800s through the Civil War years, state-chartered banks in Paducah and other Kentucky towns and cities issued their own paper currency. This was the era before National Banks and the Federal Reserve. (Circa-1945 postcard image courtesy of Steven R. Shook, via Flickr). Hover to zoom.

Less than five years from now, a beautiful and historic Kentucky river-town will celebrate its bicentennial. Paducah, nicknamed the “City of Crafts & Folk Art” for its cultural heritage and focus on creativity, is located in the heart of America’s inland waterways, at the joining of the Ohio and Tennessee Rivers. It was founded in 1827 by William Clark—one of the leaders of the Lewis and Clark “Westward Journey” expedition—and gained prominence for its central role in river and railroad transportation.

This is a Proof note dating from the 1850s to the 1860s, of the Commercial Bank of Kentucky, headquartered in Paducah. It was a special printing, possibly the only one made, on thin, strong “India paper,” likely intended to test or illustrate the appearance of a proposed $2 bill. Described in an auction by Stack’s Bowers Galleries as a “trophy” note due to its extreme rarity, it sold in 2014 for $5,287.50. (Image courtesy of Stack’s Bowers Galleries).

Paducah is one of just nine places in the United States designated as a UNESCO Creative City. Locals say that art isn’t just something to appreciate here—it’s a way of life. Today in Paducah you’ll find riverfront “Wall to Wall” murals that tell the rich story of the city’s past and present. More than 50 colorful panels were created under the direction of renowned muralist Robert Dafford. They foster connection and engagement, guiding visitors to museums, architecture, historical markers, landmarks, and cultural experiences.

Mounted on card stock, this beautiful Proof note from Paducah’s hometown bank features a charming vignette of a little child hugging a family of rabbits. It sold in 2011 for $2,875. (Image courtesy of Stack’s Bowers Galleries)

From the 1830s to the 1860s, several large banks had branches in Paducah, including the Bank of Kentucky (headquartered in Louisville and capitalized at $5,000,000 in 1834), the Bank of Louisville, and the Peoples Bank of Kentucky (Bowling Green). Paducah’s hometown lender was the Commercial Bank of Kentucky, chartered by the state in 1852 and located at the corner of Third and Broadway. Its authorized capital started at $200,000, and the bank grew over the years. By 1863 it had $1,701,417 worth of paper money in circulation, and branches located in Cynthiana, Harrodsburg, Lebanon, Louisville, Monticello, Newport, and Versailles.

This $1 note of the Commercial Bank of Kentucky (Paducah), issued in 1859, shows a man pushing his raft along a waterway. The scene evokes Paducah’s importance as a hub of American river transportation. This note obviously saw plenty of circulation in day-to-day commerce. Even in its worn condition, it sold in 2010 for $977.50. Part of its appeal is its rarity: Only about a half dozen are known to have survived the ravages of time. (Image courtesy of Stack’s Bowers Galleries).

The Commercial Bank of Kentucky issued notes of $1 up to $100 face value. None of them are common, making them a nice challenge for the collector of old Kentucky banknotes. In the Whitman Encyclopedia of Obsolete Paper Money, volume 7, economic historian Q. David Bowers observed that “It is rare indeed that notes of this bank come on the market.”

Like the city of Paducah itself, the paper money of its hometown bank is artistic, unusual, and rich in history. Its fancy engravings include portraits of famous statesmen, scenes of steamboats and men at work, views of Native Americans trading with settlers, and other colorful vignettes.

On March 23, 2021, Governor Andy Beshear commissioned Whitman Publishing’s Dennis Tucker as a Kentucky Colonel—the highest honor awarded by the Commonwealth—in recognition of his career in book publishing and for promoting knowledge of Kentucky’s status as an important subject within American numismatics. Tucker’s column “From the Colonel’s Desk” explores the fascinating history of Kentucky embodied in coins, tokens, medals, paper money, private currency, and related artifacts of material culture.

From the Colonel’s Desk: The colonel is on the hunt. . . at the ANA

From the Colonel’s Desk: New Kentucky money for a nation torn by war

From the Colonel’s Desk: More “Hometown notes” from the Bluegrass State