My sister has a number of old (US) coins/coin sets she wants to sell. I suggested that she look for a local coin store (rather than say something like eBay) and it’s been EONS since I’ve been to the one I used to sell the old coins/coin sets I had — can’t even remember where it was except that it was in a shopping center somewhere in Virginia.

I replied with some information about the local coin shops, but I also expressed an interest in providing some pricing information as well, so she would be able to judge the fairness of the store’s offer.  To give her a sense of my experience with coins, I included the URL for my coin collecting blog, as well as to the articles I have written over the years.  I admitted to my colleague that I had an interest in possibly making an offer for the coins, but that was secondary to giving her the data so she could make an educated decision, regardless of the outcome.

A few weeks later, I received an email from the sister with an Excel spreadsheet with coin descriptions ranging from early Lincoln wheat cents to modern dollars and everything in between.  I went through the data, documenting the amount of silver and the current intrinsic value when appropriate; for the non-silver coins, I provided sets of prices from my Krause reference book across a range of conditions.  Early on, she had indicated that someone was interested in purchasing the pre-1965 silver coins; as I had no intention to step on anyone’s toes, I stated twice that if the other offer was reasonable, she should take them up on it.

She thanked me for the information, and also asked me if there were any that I would like to purchase. I compared her list against my collection, and found eight individual coins and two coin sets that I did not already own. I rounded up the values that I had provided to her for those items, and sent her the total, reiterating my recommendation of taking the prior offer if it was reasonable. She replied and, much to my surprise, she accepted my offer. We met, and spent 10 minutes searching through plastic baggies that she had used to sort the coins by denomination and year. We found the eight I had wanted, and I paid her the amount I promised for them and the two coin sets. She told me that the other person was still interested in the silver, but that she would contact me to see if there was anything leftover that I would want. She also asked if I would be interested in silver dollars that she knew she had, but had not yet located; I replied that I would be interested, and with that she wished each other well and parted ways. 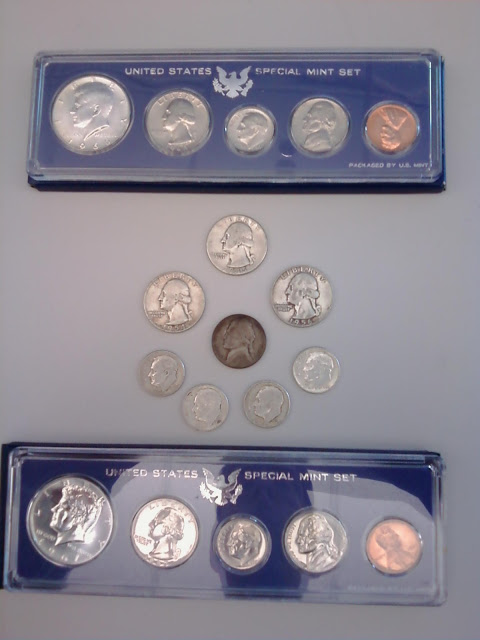