In June 2008, the United States Mint introduced the Direct Ship Program. Businesses and individuals were able to order circulating dollar coins directly from the United States Mint at face value with no charges for shipping and handling. The purpose of the program was to remove barriers and improve circulation of the one dollar coin, but frequent flier mile enthusiasts had other ideas. They have used the program to rack up enormous rewards at zero net cost. 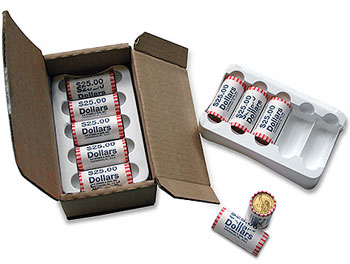 When the Direct Ship Program was introduced, United States Mint Direct Edmund Moy stated, “Retailers and financial institutions want to be responsive to customers’ requests for the Presidential $1 Coin. The $1 Coin Direct Ship Program will help them to easily obtain the number of coins that best suits their needs.”

Under the program, coins were available in 25-coin rolls, packaged 10 rolls to a box, for a $250 face value. These $250 boxes could be ordered at face value in quantities of up to two boxes per design. The United States would pay shipping and handling fees for delivery of the coins. The limit of two boxes per design was later raised to twenty boxes ($5,000 in coins) for the 2009 Native American Dollar.

The Wall Street Journal had a story this week, which described how individuals ordered $10,000 or $15,000 worth of coins through the program for the sole purpose of earning miles and other rewards on their credit card. Upon receiving the coins, they immediately cashed them in at the bank. In one extreme case, someone claimed to have bought $800,000 in coins.

In response to the abuses, the United States Mint recently added this message to the product pages for Direct Ship Presidential Dollars.

The purchase of $1 coins under the Circulating $1 Coin Direct Ship Program is a cash equivalent or cash-like transaction. Ordinarily, such purchases are not eligible for credit card rewards, cash-back, cash rebate, and similar programs. Check with your card issuer for its terms and conditions.

The Mint still offers George Washington, John Adams, Thomas Jefferson, James Madison, and Andrew Jackson Presidential Dollars through the program. The ordering limit for each of these options is set at two boxes of coins per design.