The Monnaie De Paris has launched a new gold coin which lists every French region or department as part of its unique obverse design. Following the success of the “Regions” series launched earlier this year, the gold coin compliments this silver series which comprised 27 silver coins in total with a face value of €10. 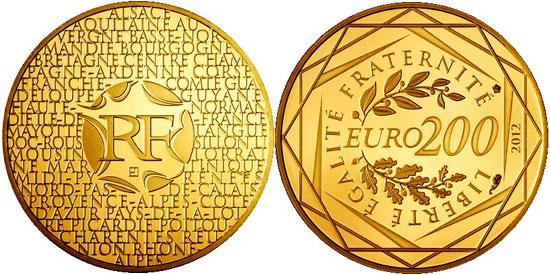 This new issue is the first gold coin product from the Monnaie de Paris which is to be sold at face value. The coin contains an amount of gold bullion which is similar to the face value (at current bullion rates, the gold content is €165). The obverse designed by artist Joaquim Jimenez of the Monnaie de Paris whose designs are also seen on the silver series, includes the initials “RF” surrounded by a stylized outline of the geo-political borders of France and included are 22 lines of text listing each mainland region and the five overseas departments governed by France.

The reverse includes the coin’s face value of “200 EURO” surrounded by an oak and bay leaf branch. Around the branches, is the text “LIBERTE EGALITE FRATERNITE” which are themselves, surrounded by three hexagonal shapes & outlines. The year of issue “2012” is seen just next to the right of the denomination.

Produced in proof quality, the .999 fine gold coin weighs 4 grams and has a diameter of 21 mm. A total of 50,000 pieces has been authorized. The Monnaie de Paris are accepting on-line orders from the 10th – 29th September for dispatch from the 8th November to the 3rd December 2012.

For more information on this and other coins offered by the Monnaie de Paris, please visit their website at: http://www.monnaiedeparis.fr/ The information is presently in French – international orders fulfilled.