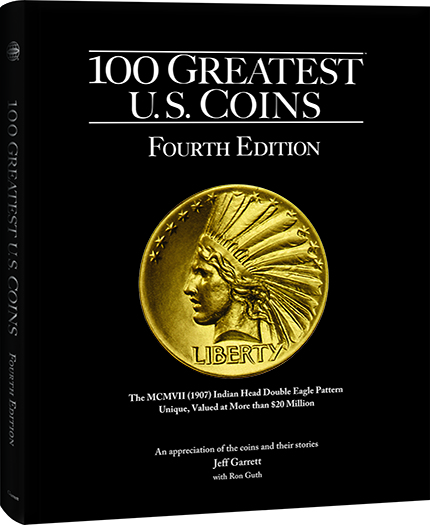 (Irvine, California) – A free copy of the latest edition of the award-winning book, 100 Greatest U.S. Coins, will be sent to anyone who submits an American Numismatic Association (ANA) new member or membership renewal through Rare Coin Wholesalers (RCW) before the end of the year. The promotion is a joint project between RCW and the ANA, the world’s largest organization devoted to collectors of coins, paper money, tokens, and medals.

“It’s an impressive, ‘coffee table’ reference book with superb, full-color photographs of 100 of America’s greatest numismatic treasures.  This book is an informative update to the earlier editions that were named Best Book by the Numismatic Literary Guild, and usually sells for about $30,” explained Contursi.

New member ANA applications and renewals can be conveniently submitted online at www.rarecoinwholesalers.com/ana-membership,

“Why is RCW doing this? First, we strongly support the educational mission of the ANA, the ANA’s promotion of coin collecting and the many benefits ANA members enjoy. The author of this excellent, Whitman Publishing book, Jeff Garrett, is the current ANA president and, we support his efforts to grow the association,” explained Contursi.

“Second, many of the coins depicted and discussed in the book are coins RCW has owned and exhibited at the ANA Money Museum, such as the finest known 1794 silver dollar—the world’s most valuable rare coin and believed by many experts to be the very first silver dollar ever made by the United States Mint—or we assisted collectors in acquiring the kinds of coins featured in the book for their own collections,” said Contursi.

“Finally, our family has grown our business to the next generation, similar to many of our collector/investor clients and colleagues, and we strongly encourage educating and advising the future stewards of numismatics for many generations,” stated Contursi.

“It is my goal to increase membership of the American Numismatic Association by at least 5,000 members in the next few years. I applaud the team at Rare Coin Wholesalers for being strong partners with the ANA over the years and their continuing support of the association’s education mission,” stated ANA president Garrett.

Through this promotion, each applicant’s information will be provided to RCW for fulfillment. In addition to receiving the free book, everyone applying to join the ANA or renew through this promotion will receive additional information from RCW, including useful personal-finance commentaries prepared exclusively for RCW by noted economist Scott Sumner, Ph.D.  The Atlantic magazine described Dr. Sumner as “the blogger who saved the economy.”  He is director of the Program on Monetary Policy at the Mercatus Center at George Mason University in Arlington, Virginia and is Professor Emeritus of Economics at Bentley University in Waltham, Massachusetts