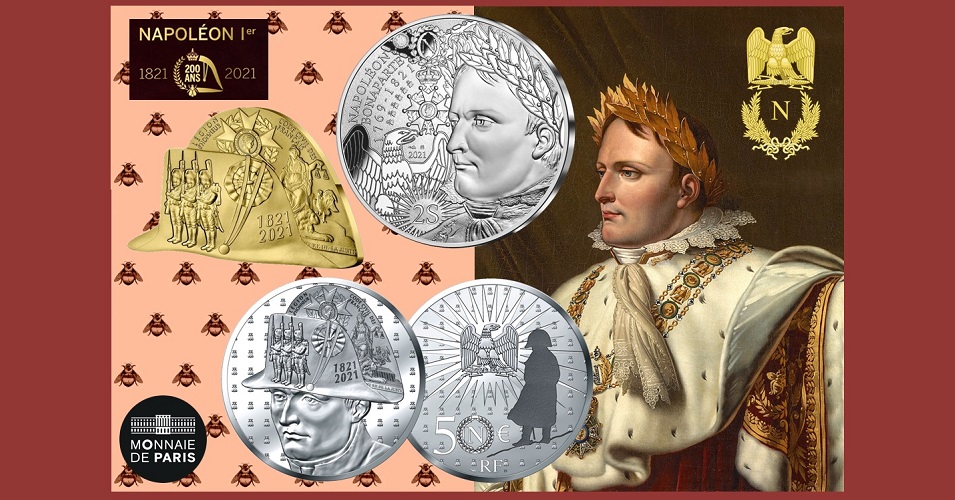 The Monnaie de Paris has released new collector coins which mark the bicentenary anniversary of the death of Emperor Napoleon, a French military leader who rose to the rank of emperor while conquering much of Europe in the early 19th century.

Napoleon’s legacy is remembered still as a reformer who instituted initiatives such as higher education, a comprehensive tax code, and road and sewer systems. In terms of finance, Napoleon established the Banque de France, the first central bank in French history, and simplified the coins and currency by introducing the French franc of 100 centimes. Another legacy of Napoleon was his set of civil laws, the Code Civil — now often known as the Napoleonic Code. This consisted of the development of the civil law legal system with its stress on clearly written and accessible law, much of it is still in use in France and in many countries in Continental Europe.

Also noted for his somewhat short stature, at 1.57 metres (or five feet, two inches), he was actually the height of an average French male.

Napoleon was noted for having abdicated twice, whereupon he was succeeded by Louis XVIII, a member of the Bourbon Dynasty and overthrown during the revolution in 1789. Upon his death in exile, Napoleon left one legitimate heir, his son Napoleon Francis Joseph Charles (1811–1832), known from birth as the titular king of Rome. His mother was the Austrian Archduchess Marie Louise, whom Napoleon married the year before. The little prince became recognised by Bonapartists as Napoleon II in 1814 and technically reigned for only two weeks. His grandfather, the Austrian Emperor Francis II, awarded him the title Duke of Reichstadt in 1818. Napoleon II died of tuberculosis aged 21, unmarried, and left no children.

One of the most complex and ornamental coins produced by the Monnaie de Paris, coins in the shape of a bicorne, the hat which became an icon of the Napoleonic era. It has been replicated in its distinct shape combining both rounded forms and sharp ends. This involved the study of the final shape of the planchet to be struck, which allowed the engraving to capture the unusual shape and adapt both the graphic and depth design. This atypical shape requires the know-how of the artisans of the Monnaie de Paris, who produced a specific tool for the process of cutting planchets that perfectly replicated the final shape contained by a special cap during the minting, which enabled the end result — a perfectly formed coin in the shape of a bicorne.

Struck as €10 silver and €200 gold coins, the obverse side features an intricately detailed scene on the rim of the hat showing three grenadiers of the guard seen the left while the allegoric figure of Justice, symbolising civil reforms, is detailed on the right. The Legion of Honour is the link between the military world and the civilian world shown behind the hat’s fold and the French rosette completes the decor. The reverse side depicts the famous silhouette of the emperor against a background of the sun of Austerlitz. Various iconic symbols are depicted, such as the eagle, bees, and laurels, which integrate the coins’ face value. The laurel wreath also makes reference to the spectacular coronation of Napoleon which occurred in 1804. Bees comprise the background as Napoleon chose the bee as the emblem to represent his status as emperor. The initials RF are present at the bottom-right of the coin, as well as the hallmark of the coin’s designer Joaquin Jimenez.

The obverse side of these coins features the distinct bicorne hat and the beautiful design which was minted in the shape of these hats as a separate coin. The image of Napoleon is shown wearing the bicorne; the detail is enhanced by a process of high-relief on the silver coins. In the background is a pattern of bees, the symbol of Napoleon’s tenure as emperor of the French. The reverse side replicates that of the bicorne coin’s design — the famous silhouette of the emperor against a background of the sun of Austerlitz. Various iconic symbols are depicted, such as the eagle, bees, and laurels, which integrate the coins’ face value. The initials RF are present at the bottom right of the coin, as well as the hallmark of the coin’s designer Joaquin Jimenez.

The obverse side of the standard-issue 10 and 100-euro coins features a familiar image of the Emperor Napoleon, the portrait of Napoleon with his crown of laurel leaves created out of pure gold. Several strong symbols are incorporated in the design such as the Legion of Honour decoration instituted by Napoleon, the eagle which became part of the imperial crest, the bee — a symbol of imperial authority — and the sun of Austerlitz. The figures 2S are inscribed in the sun itself commemorating the date of the victory of the battle of Austerlitz, 2nd December 1805, the “S” representing the month of December according to the previous French Revolutionary calendar.

The €20 silver coin is available from the 25th May. The Monnaie de Paris is also offering a variety of collector medals to mark the bicentenary. For additional information about these coins and other coins available, please click here.