On October 7, the Monnaie de Paris launched a new set of coins that pays tribute to the world’s most famous cartoon mouse. The five-coin series highlights the evolution of the lovable, big-hearted character’s portrayal from the time he first graced the silver screen nearly 90 years ago. (For more on Mickey and friends, scroll down below the specifications chart.)

The collection consists of two silver coins with vivid color applications and three gold coins, all struck in Proof quality. The five obverse designs include the more notable changes in Mickey’s appearance, along with familiar scenes or “stills” from some of the more unforgettable cartoons. Behind each depiction is Mickey’s polished silhouette recessed into a stylized, Disney-inspired background. The inscription “Mickey Through the Ages” (MICKEY À TRAVERS LES ÂGES) reflects the focus of the collection: the evolution of the beloved mouse, who celebrates his 88th anniversary in 2016. Next to these elements are the Disney copyright insignia and the inscription RF. The five reverse designs share a depiction of Mickey’s head as we know him today, against a background borrowed from the coin’s obverse. The name MICKEY appears at upper right; the denomination appears on Mickey’s left ear, and the year of issue, 2016, on his right.

10 €uro—The obverse of this silver coin depicts with vivid color the iconic character as he was created by Walt Disney in 1928. Mickey’s ears, nose, and body are hand-colorized in deposits of black, red, and yellow resins.

50 €uro—The obverse of the silver €50 with its vivid, color highlights traces the evolution of Mickey from 1928 to the present day, through five featured drawings.

50 €uro gold—The obverse of this coin depicts Mickey Mouse as he appeared in the short film Mickey’s Nightmare in 1932. This style is closer to the modern version of Mickey and may be more familiar than the earlier ones.

200 €uro—The obverse of this coin includes a depiction of Mickey from his second short film, Steamboat Willie, produced in 1928, which rocketed Mickey to international stardom and into the role of the primary figure of Walt Disney.

500 €uro—The obverse of this coin depicts the very first design of Mickey Mouse, as he appeared in the short animated silent film Plane Crazy. Produced and previewed in 1928, the cartoon was officially released one year later, in 1929. 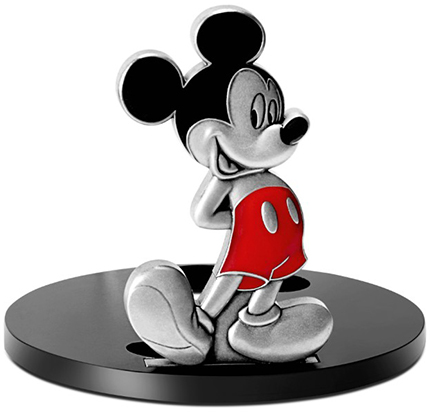 The gold coins are available separately and are presented in branded, MdP custom boxes. The silver coins will be available soon. An additional commemorative medal, in honor of the 50th anniversary of the death of Walt Disney, is also available. The design of this Bronze-plated medal includes the copyright of Disney, indicating the collaboration between the Monnaie de Paris and the famous animation studio. The reverse of the medal is plain, allowing a personal engraving or message. The medal has a functional, original design that allows the figure of Mickey to pop up separately for display, using the base of the medal as a stand. Mintage is limited to 500 pieces and each medal is numbered on the edge. A series of mini-medals and a collector’s plaque depicting the five drawings shown on the €50 silver coin are also available. (Continued below.)

For more information on these and other coins offered by the Monaie de Paris, please visit their website. International sales dispatched where applicable.

Gold and silver “Mickey Through the Ages” coins can also be purchased from APMEX.

The Universe of Mickey Mouse

It was 1928 when an unknown but lovable character named Mickey Mouse made his debut in a short animated cartoon entitled Steamboat Willie. This is considered the character’s debut, although an earlier short film, Plane Crazy (without sound) preceded it by just months. The more well-known of the two cartoons became a favorite with movie-goers and captivated the imagination of would-be enthusiasts of sound film. Steamboat Willie was released less than a year after The Jazz Singer, which was the first commercially successful motion picture with sound. The black-and-white animated cartoon—hand-drawn frame by frame and running 7 minutes, 42 seconds—was the first animated Disney cartoon to be commercially released with synchronized sound which included limited dialogue. The cartoon also included the songs “Steamboat Bill” and one of the country’s more familiar favorites, “Turkey in the Straw.” It was produced by Disney Studios and directed by the studio’s founder, Walt Disney. (Continued below the slide show.)

In the coming years, the franchise of Mickey Mouse grew from strength to strength and saw the addition of Mickey’s girlfriend, Minnie, as well as an endearing group of friends and sidekicks such as Donald and Daisy Duck, Goofy, and Pluto. These characters would appear in countless short films that would usually be shown before feature-length films and would for many, be the best part of visiting the movie theaters. One of the most well-known and remembered appearances of Mickey Mouse was in the third feature-length animated film, Fantasia, which depicted Mickey as a sorcerer and blended classical music with enticing animated visuals. The music for the film was arranged by famed conductor Leopold Anthony Stokowski (1882–1977) with the soundtrack being recorded using multiple audio channels and reproduced with Fantasound, a pioneering sound-reproduction system that made Fantasia the first commercial film to be shown in stereophonic sound. The techniques used in this film would be replicated in many more films to come and even resulted in an honorary Academy award in 1942, the first ever for an animated body of work.

The adventures of Mickey, Minnie, Donald, Daisy, Goofy, and Pluto, along other spectacular animated stories brought to the silver screen (such as Snow White, Cinderella, Pinocchio, Bambi, and Dumbo) went on to form the basis of one of the most innovative, ambitious and dynamic theme parks ever seen when Disneyland opened in California in July 1955. The original park was designed by Walt Disney, the talented creator of Mickey Mouse, and is the only park in the present group to have had his direct input. Known the world over as “the happiest place on Earth,” the theme park is visited by tens of millions of admirers—young and old. Today, there are Disney theme parks in four countries: the United States, Japan, France, and China (Shanghai and Hong Kong), as well as a Disney resort in Hawaii.