The Monnaie de Paris have issued a new commemorative coin to highlight the anniversary of a new numismatic item which was introduced to collectors in late 2001, that of the EURO starter kit. The most recent EURO starter kit was issued just last December as Estonia adopted the Euro and retired their national currency, the Kroon. 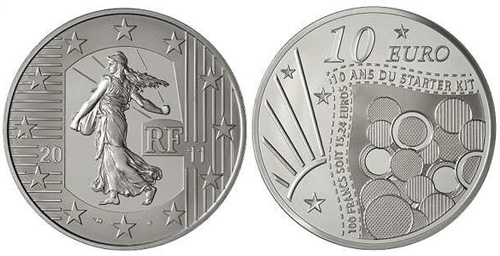 The commemorative coin’s obverse shows the twelve stars of the EU with a depiction of Oscar Roty’s iconic design of “the sower” (first introduced on French circulation coins in 1897). The initials “RF” and the coin’s year of issue (2011) also appear. A similar design is currently carried on French circulation 50, 20 and 10 EURO-cent coins.

The reverse of the coin shows a portion of a EURO starter kit with the commemorative inscription “100 FRANCS SOIT 15,25 EUROS – 10 ANS DU STARTER KIT” along with the coin’s nominal value of 10 EURO.

For more information on this and other coins issued for 2011 by the Monnaie de Paris, please visit their website with pages in English at: http://www.monnaiedeparis.com/collectionneurs/mc.htm