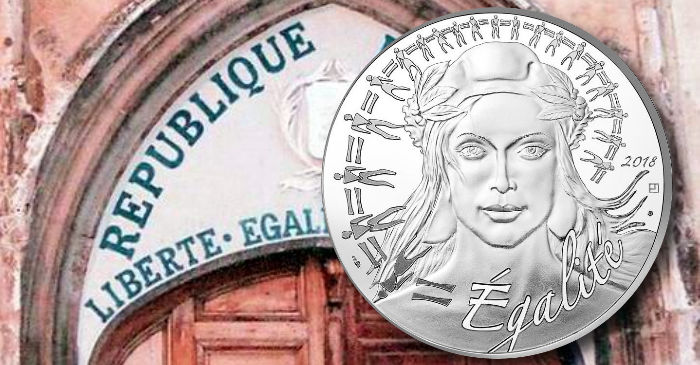 The Monnaie de Paris have launched (19th January) the second set of coins which is part of their very popular Marianne Trilogy series that focuses on one of the country’s most enduring symbols of nationhood and the French Republic: Marianne. Following the series of collector coins featuring the Sower, Hercules, and the Rooster, the Monnaie de Paris honours a major symbol of the French Republic for the second year.

Since the earliest days of the French Republic in 1792, Marianne was envisaged to become a personification of liberty and reason — the ideals and aspirations of the new society which emerged out of the French Revolution. The revolution saw an end to France’s millennium-old Ancien Régime (the old order) with the execution of King Louis XVI and Queen Marie Antoinette, and what emerged from the ruins of the now-defunct French monarchy was an allegorical portrayal of the Goddess of Liberty. This female representation soon became a symbol of Republican France, with an effigy of Lady Liberty soon gracing the obverse side of new coins of the republic, replacing that of the king’s likeness. Typically Marianne is depicted wearing a Phrygian cap, a soft felt cone-shaped hat, the depiction of which has evolved over the years, more influenced by artistic and period-era style.

Although the origins of Marianne regarding how or when she received her name remains unclear, she has continued as a reminder and an evolving attachment of the common citizen to the revolution which founded the French Republic. During the reign of Napoleon, the restored kingdom in 1816, and the Second Empire from 1852 until 1870, Marianne had been replaced with symbols representing Napoleon I, King Louis XVIII, Charles I, Louis Philippe, and Napoleon III — including the likenesses of each monarch. From the Third Republic to the present, the likeness of Marianne was restored on state issuances such as coins, stamps, and bank notes.

Both the gold and silver coins in this set share the same obverse and reverse designs. The first 2017-dated set of the trilogy coins focused on the first part of the French motto of Liberté, and for 2018, Marianne is illustrated around the theme of Égalité, which includes the letter “E” and is front-facing. As seen on previous designs created by Monnaie de Paris artist Joachim Jimenez, the two bars of the “E” are transformed into equation signs which are used to connect men and women to each other and symbolise equality between the sexes — a key foundation of the republic.

The reverse design incorporates the denomination of the coin surrounded by two branches: One of oak, the other of laurel. The entire motif is framed by an assembly of lines representing the hexagon shape of which two are positioned at different angles.

The coins are available from the 23rd January 2018, for their face value — with the exception of the Proof quality €20 coin. For additional information on these and other coins offered by the Monnaie de Paris, please visit their website.