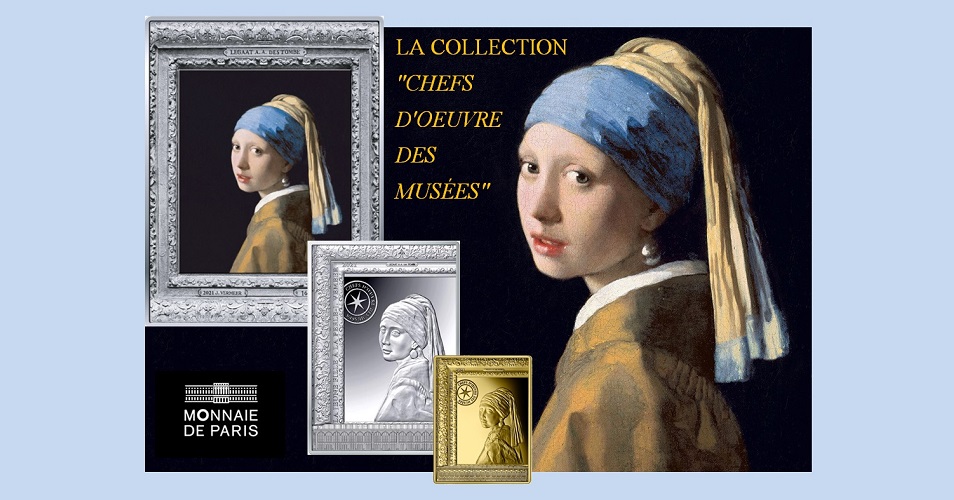 The Monnaie de Paris has launched their latest set of coins which is part of an ongoing series entitled “Chef D’œuvre des Musées” (“Museum Masterpieces”). Begun in 2017, this series pays tribute to the greatest masterpieces once present in French museums or having been painted or created in France. The choice of featuring the Girl with a Pearl Earring is on the occasion of the centenary anniversary of its display in the Jeu de Paume Museum in Paris.

Created by Dutch Master Johannes Vermeer (1632–1675), a master of the Dutch Baroque Period, who, during his lifetime attained limited notoriety, known only within the region of the city of Delft (where lived for much of his life). The painting is in the style of a tronie, a name given to a type of work common during the Dutch Golden Age and Flemish Baroque style during the 17th century. This genre particularly depicted an exaggerated facial expression or subject in costume and not meant to be a portrait. Vermeer’s likeness of a young European girl wearing an exotic dress, an oriental turban, and what was thought to be a very large pearl as an earring, was believed to have been painted around 1665. As recently as 2014, a hypothesis was raised about the material of the earring and it has been surmised that the alleged pearl may in fact be an ornament akin to polished tin as the specular reflection; the pear shape and the large size of the earring itself may lend itself to this possibility. The painting wasn’t always known by the name we know it today, in fact, there were several titles such as Girl with a Turban. As such, the Girl with a Pearl Earring was only adopted near the end of the 20th century. From 2012 to 2014, the painting was exhibited in Japan and in the United States and later in Bologna, Italy. In June 2014, it returned to its home, the Mauritshuis Museum in the Hague where it had been on display since 1902. Officials at the Mauritshuis have stated that the painting would not leave the museum in the future. In total, more than 2.2 million people around the world turned out to pay homage to Vermeer’s masterpiece while on tour.

So compelling is this extraordinary painting that in 2003, it even inspired a major motion picture based on the bestselling historical novel by Tracy Chevalier, who lends a fictional story of the young girl who was so strikingly portrayed. As many artists in the day often worked from compositions of subjects rather than specific models, it is likely this young girl was not an actual person but rather a compilation of several young women perhaps known to the artist.

The set of rectangular-shaped coins in both gold and silver beautifully depict Vermeer’s famous work the Girl with a Pearl Earring with the half-kilo Proof silver version including full colour to re-create the sheer beauty and add striking detail onto the coins’ surface. On the gold and two smaller silver coins is the insignia of the series shown at the top left which contains the text CHEF D’ŒUVRE DES MUSÉES (“Museum Masterpieces”) encircling a five-pointed star and it is this mark that defines the whole series. Below the gold and silver Proof coins without colour incorporates the façade of the Jeu de Paume museum in Paris where the work was exhibited for the first time outside the Netherlands 100 years ago in 1921. The sumptuous frame that surrounds the work designed to appear as intricate wood carving was hand-crafted by the engravers of the Monnaie de Paris. The name of the work and that of the artist also completes the decor.

The reverse, which is common to the series, cleverly presents a mixture of views from several major French museums. At the top left is an interior view of the Musée d’Orsay, recognisable by its superb clock. Next to it is a view of the facade of the Louvre, visible from the Cour Napoléon — where the very famous pyramid is located. Below these two elements is a fresco on the Hôtel Salé, which houses the Picasso museum. The lower part includes a view of the facade of the Hôtel Biron, which is the current Rodin Museum. Above is the famous staircase of the Centre Pompidou. The text REPUBLIQUE FRANCAISE, along with the coins’ denomination, is also integrated into the design.

The €10 and €50 silver and €50 gold coins are struck to Proof quality and available to purchase as separate items. For additional information about these coins and others available from the Monnaie de Paris, please visit their website.

France: New collector coin series entitled “The Art of the Pen” launches with a salute to poet Jean La Fontaine