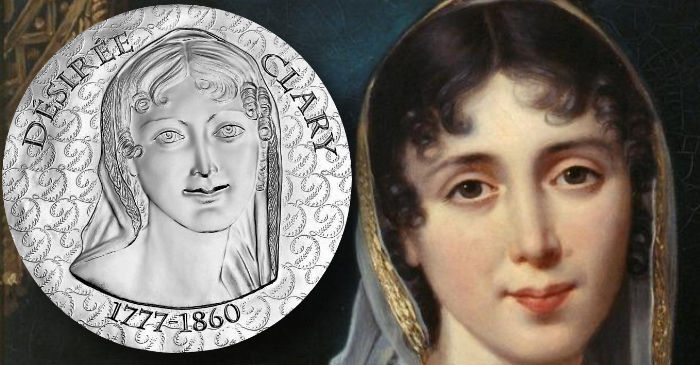 The Monnaie de Paris have launched their latest coin in the successful series entitled “Women of France,” which tells the stories of notable French women who have shaped and influenced France from the first millennium to the current decade. The latest coin highlights the life of Désirée Clary (1777–1860), who would be remembered in history as the woman who would become Queen consort of Sweden by marriage to the designated heir of the Swedish throne.

Bernardine Eugénie Désirée Clary was born to François Clary (1725-1794), a wealthy and influential ship owner in Marseilles who was involved in international trade. She was the youngest of his 13 children by her father’s second wife and one of the 10 children who lived into adulthood. Her sister Julie (1771–1845) would marry Joseph Bonaparte (1768–1844) in August 1794, elder brother of the first consul of France and future emperor, Napoleon. Désirée would herself become engaged to Napoleon, who preferred to call her Eugénie, but by early 1796, Napoleon would jilt Désirée in favour of a marriage to Josephine de Beauharnais, an influential lady of Parisian society. In 1798, Désirée would marry the young and handsome General Jean-Baptiste Bernadotte, whom Napoleon would make a marshal of France in 1804. Under French influence, and to alleviate the succession crisis of the childless Swedish King Charles XIII, the Swedish Diet elected him crown prince and future successor in 1810, making Désirée crown princess of Sweden. She had changed her official name to Desideria, and, for all intents and purposes, found life in Sweden challenging — so much so that she left Stockholm, her husband, and little son a year later and went back to Paris. With the poor health of King Charles XIII, the new crown prince became Sweden’s de-facto ruler. The official title of king would be bestowed upon the death of Charles XIII, and the newly proclaimed King Charles XIV John went to his coronation on the 11th May 1818, and on the 7th September in Nidaros, as king of Norway. While in France, Désirée would act as a mediator between her husband and Napoleon, but with the abdication of the emperor, the restoration of the Bourbon dynasty in 1815, and her husband’s succession as king of Sweden, she continued to keep open an important dialogue between the two countries. It would not be until 1823 that Désirée would return to Sweden when she accompanied her young son Prince Oscar and his intended bride, Princess Josephine of Leucthenberg, from meeting the royal couple in Aachen and back to Stockholm. Désirée would remain in Sweden for the rest of her life.

On the 21st August 1829, she was herself crowned as Queen of Sweden in Stockholm, having missed the coronation of her husband 11 years before. Despite the suggestion that she should convert to the Lutheran faith before her coronation, she remained Catholic and was crowned essentially at her own request after having pressed Charles XIV John with a wish that she should be crowned: “otherwise she would be no proper Queen.” Most at the time believed that Désirée regarded it as protection against divorce. Désirée would not be crowned as Queen consort of Norway due to her remaining a Catholic. Desideria is remembered in Sweden as being only the second commoner to become a Queen of Sweden since Karin Månsdotter in 1568, consort of King Erik XIV. Her husband was succeeded by their son as King Oscar I in 1844 and Désirée followed her husband in 1860. Their Bernadotte descendants and royal house are the current royal Swedish family, having celebrated their bicentenary in 2018.

The coins, €50 gold and €10 silver pieces, show Désirée Clary’s portrait surrounded by the years of her birth and death, as well as her name. The artwork refers to Robert Lefevre’s painting, Portrait of Désirée Clary from 1807. Included in the design is a tapestry with the monogram “D,” relating to Désirée Clary, which is placed behind her portrait.

The reverse of the coin shows Désirée Clary’s husband, King Charles XIV Jean (John or Johan), on horseback in front of the official mantle of the Swedish coat of arms, a symbol of the monarch. Its composition, inspired by Charles VIII of Sweden, was created during the fifth decade of the 15th century. The text COURONNEMENT DE CHARLES XVI is placed in an arch above the primary design while the denomination of the coin and the year of issue are placed below.

The coins dedicated to the memory of Désirée Clary, Queen of Sweden, are part of a three-coin issue for 2018 which is part of the series entitled “Women of France,” and includes coins honouring Josephine de Beauharnais (1763-1814) and Georges Sand (1804-1876). Each coin is available as a separate purchase. The Proof-quality coin is encapsulated and housed in a branded Monnaie de Paris custom case along with a numbered certificate of authenticity. For additional information on these coins and others available from the Monnaie de Paris, please visit their website.