The Monnaie de Paris has launched its 2020 collection which is part of the Europa Star collector coin series. The series is an ongoing annual programme that focuses on seven ages of Europe. The ones featured on the banknotes of the euro-zone single currency chronicle the Classical, Romanesque, Gothic, Renaissance, Baroque, Rococo, and Modern ages. The 2020 collection features architecture and artwork of the Gothic era, which is divided into Early Gothic (1150-1250), High Gothic (1250-1375), and International Gothic (1375-1450).

Of particular importance during the Gothic era in France was the construction of the Cathedral of Notre Dame. Construction began in 1183 during the reign of Louis VII and was eventually completed by 1345, at which time Philippe VI of the house of Valois was king. The decor included some of the most colourful and intricate stained glass panes ever assembled. Known as “Notre Dame de Paris” (translated to “Our Lady of Paris”) and located on the eastern half of the Île de la Cité in the fourth arrondissement of Paris, it is the church that contains the cathedra (or official chair) of the archbishop of Paris. The cathedral is also home to the crown of thorns, believed by the faithful to be a fragment of the True Cross and one of the Holy Nails.

Notre Dame is considered a Gothic-style masterpiece of architecture with a height of 226 feet (69 meters), a length of 420 feet (128 meters), and a width of 226 feet (69 meters). As such, it is one of the largest structures of its kind and is among the first buildings in the world to use arched exterior supports, becoming a noted aspect of Gothic style construction. During the French Revolution, which broke out in 1789, Notre Dame sustained considerable damage and underwent considerable reconstruction to restore its original Gothic splendour. Sadly, and more recently, just one year ago the cathedral sustained extensive damage during a fire, which broke out on the 15th April — lasting into the early hours the next day. Before the fire forced the closure of Notre Dame, the cathedral welcomed more than 13 million visitors every year from around the world and was named a World Heritage Site by UNESCO.

The design on the obverse features two important elements of Notre Dame and the Gothic era. Highlighted is the beauty of Notre Dame de Paris Cathedral and its stained glass windows, the Lady and the Unicorn, as a major emblem of art in the 16th century, as well as the illuminating monks, who allowed this artistic movement to shine through the works and writings of the time. The denomination is placed to the upper-right of the primary design.

The design of the reverse side is common to all the countries from the Europa Star programme and features a star in the centre, inspired by the Europa star logo. This year’s theme and the name of the issuing country are inscribed in a circular arc. In the centre is the national element. In the case of the French Republic, the allegorical female figure of Marianne’s face is dressed with floating flags, with the year of issue and mintmarks appearing on the bottom left of the coin. 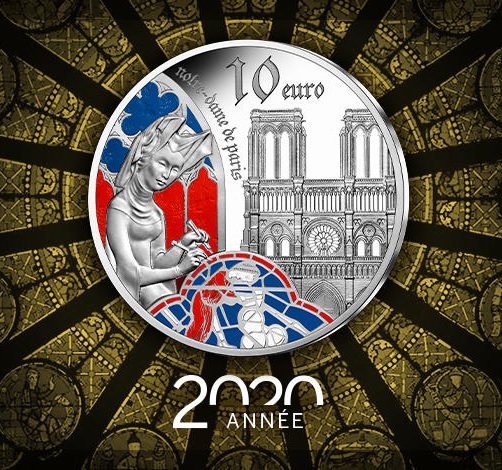 The gold and silver coins are available as separate purchases, are encapsulated, and presented in a custom Monnaie de Paris case, accompanied by a certificate of authenticity. For additional information about these coins and others available from the Monnaie de Paris, please visit their website.

Please note: Shipping is temporarily suspended following government regulations pertaining to COVID-19 safety precautions and will resume after the regulations are rescinded.