The Monnaie de Paris has issued two new coins highlighting the upcoming Rugby World Cup, which is to be hosted in England from today, September 18, to October 31.

At its start in 1987, the tournament included 16 national teams that were required to qualify in order to participate. Since then, the tournament has grown to 24 national teams, with 20 teams admitted via qualifier. This year’s competing teams will be Argentina, Australia, Canada, England, Fiji, France, Georgia, Ireland, Italy, Japan, Namibia, New Zealand, Romania, Samoa, Scotland, South Africa, Tonga, Uruguay, the United States, and Wales. As the United Kingdom is comprised of four constituent countries, they are allowed to compete separately. The kick-off game will be on Friday, September 18, between England and Fiji in Twickenham, London.

The Monnaie de Paris coins are unique as they are the world’s first oval coins to utilize a convex surface, creating a “chasm” as opposed to a flat surface. The shape and production of these pieces represents a level of unrivaled technical innovation, according to the Monnaie de Paris. 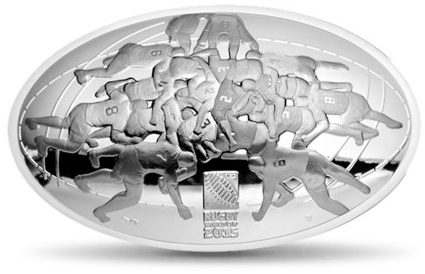 The two coins share a uniform design representing the dynamic, action-packed games that Rugby tournaments have become known for. The obverse includes a depiction of the “scrum,” shortened from the word scrimmage, meaning the part of the game that involves players from both teams packing closely together with their heads down and attempting to gain possession of the ball. The official logo of the Rugby World cup is placed just below the design. This is the side of the coin which provides the domed effect. 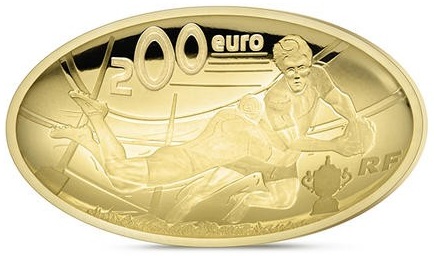 The reverse design includes two players, one being skillfully tackled with the ball, and the other preventing a score. The denomination of either 10 or 200 euro is placed to the upper left; the initials “RF” along with a rendition of the William Ellis trophy can be seen to the lower right.

The coins are available to purchase as separate items. 50 and 500 Euro round gold coins are also being issued to mark this worldwide sporting event. For more information on all four coins, please visit the Web site of the Monnaie de Paris. Information is offered in both English and French, with international orders dispatched where applicable, under the guidelines published by the Monnaie de Paris. For more information on the upcoming Rugby World Cup, please visit their Web site.